Seated in a Parkdale Laundromat on a Tuesday morning, 25 minutes left on the dryer timer. Never one to be alone with my thoughts, I took out my phone and began futzing with apps.[1] A scroll of social media proved uneventful (Tuesday morning and all), so I opened the only game on my phone, one I downloaded despite myself a few weeks earlier, purely to judge the hype and be part of the conversation: Pokémon Go. 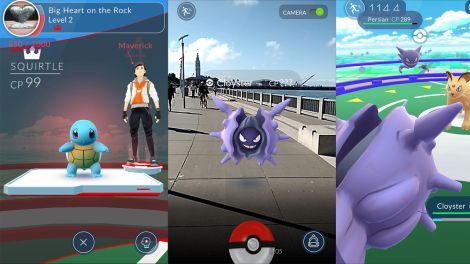 Are you ready to… catch’em all?

Two weeks after downloading it, the sheen had already started flaking off the diamond. Catching the 140-odd different Pokémon grew boring and repetitive, with the same three or four creatures appearing over and over again,[2] and my neighbourhood had proven a desolate wasteland of underpopulation, so I expected little when I opened the app.

But then. Tucked in the back of the ‘nearby’ inlay of my screen, a familiar silhouette, large and rotund. A shape I’d run into often and been beaten down by when battling for territory at local gyms.

Snorlax. The narcoleptic… bear… thing rumoured to be one of the strongest basic creatures in the game. Nothing that would cause a stampede of players, but still the best “get” I’d seen since I started playing. I checked the timer on the dryer. Twenty-one minutes remaining. I glanced down at my phone again. Still there. Was I really about to leave my drawers spinning unattended in a Parkdale Laundromat to wander the streets playing a game ostensibly intended for children?

One month and over 30,000,000 downloads since its July 6 release, there’s little left to say about Pokémon Go. The basic premise has been covered exhaustively (wander your city looking for all available Pokémon, compete against other trainers at area gyms); stories of players finding dead bodies or being lured into armed robberies have already passed into urban legend. In the two weeks following its official Canadian rollout (though enterprising players found ways to skirt regional restrictions long before), the sheer volume of players to be found on Toronto’s streets boggled the mind. If you passed someone with their phone out while walking, it was all but a given they were playing this game.

Although calling Pokémon Go a “game” is generous at best. The interactive portion involves little more than flicking a ball at the virtual rodent in front of you and praying some murky batch of statistics permits you to “catch” it. That’s it. The much-lauded “augmented reality,” portion is “fun” inasmuch as it allows the more enterprising juveniles among us to take CGI-enhanced dick pics, but it puts so much strain on one’s battery, most aspiring trainers switch it off after a couple days of playtime. As for gym battling, the game opts for the standard ‘tap/hold/swipe’ mechanic that rules the mobile platform. It’s not a bad system; it’s just used more elegantly in something like Marvel Comics’ battle royale fighter “Contest of Champions,” and nothing like the turn-based combat style the original games used for 20 years.[3] 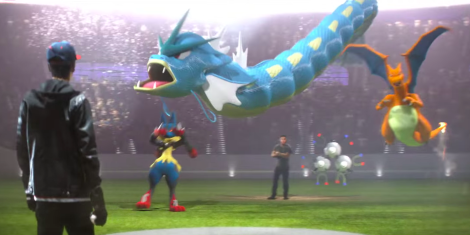 Note: This is not the actual game.

Such gripes mean little to most of the people playing, however, many of whom are now sharing their love of the franchise with their children. Personally, there’s no nostalgia present in the game for me. Pokémon emerged as a phenomenon long after I’d entered my twenties and the affiliated pretension that accompanies them, so I didn’t come up hunting, battling, trading and obsessing through six generations of portable games. The lack of actual gameplay in the mobile edition isn’t the glaring disrespect to me that it is to other people I know. Nor would it seem to be for the millions of other players who’ve made the game the type of blockbuster rarely seen in a mobile game, or even app in general.

As with any blockbuster that consumes the cultural conversation, the all-you-can-eat hot take buffet rolled out almost immediately, and not just in the expected, “grandma shaking fist at clouds” sort of way[4].  Everything from the failure of good ideas to generate revenue without corporate sponsorship, to resisting the trend as a revolutionary act and embracing “real” adulthood[5] has been trotted out in response to the app’s success. And I can grant, seeing the game “in the wild” can be a little disconcerting. Following a dinner date earlier this month a friend and I walked through Chinatown to grab a bubble tea, finding small groups of players milling about on every street corner and “Pokéstop,”[6] we passed, phones smashed to their faces, and we stopped and did the same. It felt like the first step in the digital apocalypse a generation of hand-wringers warned us about, the march to Skynet played out in miniature.

Certainly, for those who choose to, the app’s proliferation can feel sinister. The simple fact is that playing the game results in millions of people willingly offering terabytes of location information to Google (the parent company of app developer Niantic Labs), and that much information is never collected without a purpose, whether malignant or benign. Whether that Charmander is worth Big Brother knowing your every move is a question for the individual, but it’s not that far a jaunt to the land of the tinfoil hats.

So why play it?  If I have no connection to the franchise and more than a slight queasiness at some of the technology’s implications, why bother with it at all?

Because all of the hype about the game was kind of true. Built on the back of Niantic’s previous game Ingress and bolstered by the power of Google Maps, the game really does allow players to engage with their cities in ways they might never have before. The first night I played it, the only Pokéstop nearby was a sculpture near my work I’d passed by hundreds of times. Tapping the icon on my screen told me not only its name, but also its creator, and date of origin, facts I was completely unaware of. And moments like that have been happening constantly. Of specific interest to me, many Pokéstops seem to be connected to graffiti murals and public art installations, which are things I’m already interested in. So who gives a shit if I don’t know a Polywag from a Porygon, I can still plot myself a tour through some of downtown’s finer murals. Wondering what sort of Pokémon might be hiding in other boroughs of the city has spurred me to check out new places or revisit areas I haven’t been to in years, logging kilometers of walking as I do it.[7] Anyone who can’t admit some of the social benefit in an app that encourages that sort of engagement with the place they live might need to let a little love into their lives. 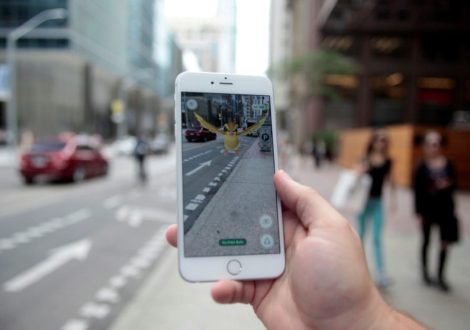 Back in Parkdale that Tuesday morning, I wasn’t having much luck despite walking a wide block around the Laundromat. I crossed to the north side of King Street only to watch the twerp blip off my screen. Assuming I’d missed my opportunity in typical fashion, I turned back to the crosswalk only for him to reappear. I still had some time before my laundry finished so I waited for the light and plotted my path when I heard a voice behind me.

“Yo, you looking for Snorlax?” A guy, early-to-mid 20’s, maybe a little unkempt and scruffy, but it’s Parkdale after all.

“Naw, I just saw him. I’m probably using the last of my data on this, but meh.”

We made small talk as we crossed the street, what “team” we picked,[8] our rarest finds. At the south corner we dap and he broke west as I continued south. Half a block down my phone buzzed and Snorlax popped up on my screen in a flurry of leaves. I could have caught the fat bastard then and there and been done with it, but I didn’t. Instead, I doubled back to the corner, looking for the guy. I saw him in the distance and yelled, in public, with other humans around, “Ay yo, man, I got him over here!” He waved and I made my way back. And we stood there, on the sidewalk, flicking our dumb little balls to this dumb little bear in a dumb little game, cursing every time we missed. But for someone who suffers from perpetual social anxiety, it was a rare conversation with a stranger in this city I claim to love but spend just as much time hiding from in my apartment. Only a special dumb little game could create a moment like that.

Oh, and I caught him. And my underwear was right where I left it.

Jordan Ferguson has no illusions about being the very best, like no one ever was. You teach him and he’ll teach you at soundcloud.com/geekdownpod.

[2] Toronto’s Drowzee infestation is seemingly second only to raccoons.

[3] More than one friend huffed to me when asked if they were playing that the game “isn’t Pokémon.”

[4] Caitlin Dewey, your issue is with your fiancé, not the game.

[5] Seriously, I must get an invite to a Jacobin holiday party, those folks really seem like a blast.

[7] Covering real world distance is essential to hatching eggs you find in-game, which can yield creatures not easily found in the wild.

[8] How is that even a question? Mystic, obviously.