1:59am – The bullpen phone rings into the empty Rogers Centre.

Late Night Cleaning Crew Member Who Happened to Hear the Phone: The game is over, Mr Showalter. 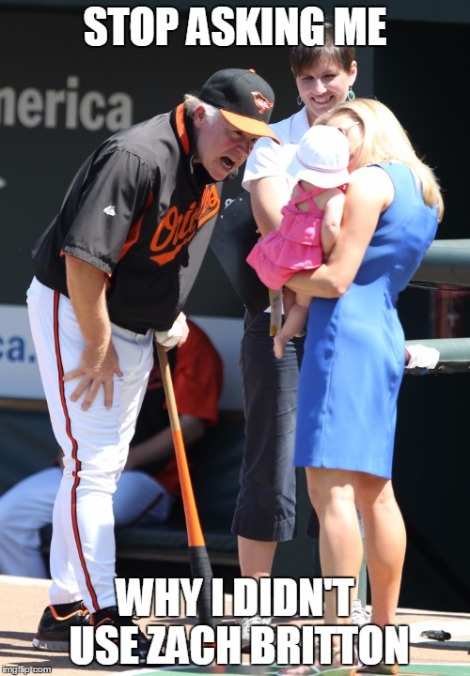 And that’s all we need to say about that.

Moving on from the dead-and-gone trash birds, the Jays will lock horns with the Tehas Ringers, or whatever it is they’re calling themselves these days.

With that in mind, and given the delightfully ornery recent history between these two ballclubs, I thought I’d trot out my four keys to the series, just as I did last year.

This season, things are a bit different — and the biggest change is that Toronto isn’t the same offensive juggernaut it was a year ago. Last year they entered the ALDS as AL East champions, having scored an MLB best 891 runs — 140 more runs than the AL West winning Rangers. This year, Toronto still finished 9th in MLB with 759 runs scored, but Texas put up 765 to finish 7th. The offensive match-up seems to be a lot more even, at first glance.

The Rangers also have ace starter Yu Darvish, missing a year ago after undergoing Tommy John surgery, but have lost Prince Fielder to early retirement and Josh Hamilton to a knee injury. They’ve added premium bats around the diamond however, with shortstop-turned-centrefielder Ian Desmond signed to a bargain contract in the off-season, designated hitter Carlos Beltran and sweet-swinging catcher Jonathan Lucroy coming over in deadline trades with the Yankees and Brewers, and rejuvenated outfielder Carlos Gomez being scooped up after being released by division-rival Houston.

Keeping all that in mind, this edition of Texas is still a bunch of whiny babies, and I fully expect the Jays to hammer them into submission.

Here are the four keys to once again besting this extremely average, smoke-and-mirrors edition of the Texas Rangers, led by their chud-like manager Jeff Banister.

A bold strategy, I know. But in this instructional video, the Rangers show off their inability to handle even the easiest grounder!

I mean, normally you want to hit the ball hard, and I get that it might be weird to change strategy now. But after watching that video, how can you argue?

The Rangers defense posted a -1 Defensive Runs Saved as a group this season, which was pretty average, but is worst among all remaining AL playoff teams. The Jays posted a +28, which puts them behind only the Red Sox (+48) among that same group. For posterity sake, Cleveland was a +17 and the terrible Orioles a -25.

The defensive breakdown between Texas and Toronto is interesting — the Jays generated most of their positive defensive stats by having good range. In other words, their players get to balls that other teams don’t. I think if you’ve watched Kevin Pillar, Josh Donaldson and Troy Tulowitzki play the field, this probably doesn’t come as a surprise to you, but Ezequiel Carrera has been excellent as well with a +22.8 UZR/150. Darwin Barney has been a positive at both short, third and second, an impressive feat, while Devon Travis and Edwin Encarnacion has grade out as just slightly above average.

The Rangers were really dinged not by their range, but by their general sloppiness — they get to a slightly above average amount of balls, but have cost themselves badly by making mistakes once they get there. The ‘soft ground balls’ thing was a joke, but it might actually hold a bit of merit– the three biggest offenders among Rangers regulars in Defensive Runs Saved were 2B Rougned Odor (-9), CF Ian Desmond (-6) and SS Elvis Andrus (-3). Not exactly what you want from your up-the-middle defense. Desmond isn’t that surprising given that this is his first full season playing the outfield, but both Odor and Andrus have been surprisingly putrid — poor range, and then poor execution when they actually get to the ball. Between the two, their lack of range and play making cost the team 26.8 runs, per UZR.

Spot the Rangers a Game — or even Two!

And then this happened:

So what could go wrong?

Kidding aside, despite all the new faces and big names on Texas, their offense hasn’t been that great lately. After most of those acquisitions were made, they finished 18th in MLB in runs scored in August, and then 13th in September/October.

One of the problems is that though they’ve added positive bats in Beltran and Lucroy, and Desmond has been good offensively all season long, regulars Mitch Moreland and Shin-soo Choo have been both injured and/or ineffective for most of the season, but particularly in the second half. Former top prospect Jurickson Profar looked like he had arrived in May and June, only to crater after the All-Star break. Talented rookie Nomar Mazara started the season well, but has fallen off a cliff in the second half, to the point that he’ll likely be the fourth outfielder against Toronto, with late addition Carlos Gomez taking his spot in the line-up.

This Rangers team played very well to start the season, but lately has been very mediocre both offensively and defensively. They’re eminently beatable. So sure, spot them a game or two. Or maybe just put them in the ground early, whichever.

Be Aware of Your Surroundings

The gutless Rangers like to punch, kick and throw things when games don’t go their way, so the Jays better watch out.

With that said, to the absolute turd — whoever you are — who threw a beer at left fielder Hyun-soo Kim during Tuesday’s Wild Card game vs Baltimore: please know that you’re a turd, and nobody likes you. You’re not funny or cool or just a ‘passionate fan who got caught up in the moment’. This isn’t a great story to tell someday. You’re just a jackass who probably drank too much and decided to whip a beer at a professional athlete, and put a stain on one of the greatest sporting moments in recent Toronto history.

Well, we all chipped in and got you a little something. Joe Flaherty is going to follow you around to your place of business, and re-create his classic role from the movie Happy Gilmore.

His comedic disdain really captures how much you suck, and what a jackass you are. He’ll remind you of it each time you screw up, which I imagine is often, since you’re so worthless. Even if your reaction after hurling the can was that of Ron Burgundy in the bear cage, please never attend or watch another Jays game. We don’t want you.

The same goes double for any fan that hurled racially charged insults at Hyun-soo Kim, Adam Jones or any other opponent, for that matter. If you can’t separate your passion for watching sports (a fun game!) from the reality of having to be a walking, talking, decent human being, go find a different hobby. Or maybe, you know, go on a Don Quixote-esque search for a clue. As my grandfather was fond of saying, you might want to think about playing tag on the highway.

Watch Out for Falling Horseshoes

The Rangers have somehow managed to appear a juggernaut, despite not really being that good at any one facet of the game. We’ve covered their offense and defense, but their pitching hasn’t exactly been impressive either, outside of the two-headed Cole Hamels/Yu Darvish monster at the top of the rotation.

Their entire bullpen was worth only 1.7 cumulative WAR on the season, 13th out of 15 American League teams. Incumbent closer Shawn Tolleson lost his job to Sam Dyson (also known as Bat Flip Victim #1), who was pretty solid, putting up 38 saves and a 2.43 ERA. He was worth only 1.0 WAR however, due to a good-but-not great K rate of 7.04, and an extremely high strand rate of 85.4%– FIP put him at 3.66 versus his actual 2.43 ERA, meaning he probably got pretty lucky over the course of the year.

‘And then he flipped his bat, which made me feel SAD and MAD!’

The Texas Rangers finished the season with the American League’s best record (95–67) but outscored their opponents by a total of only eight runs (765 to 757). Based on that run-scoring environment, we would have projected the Rangers to be barely over .500 (82-80). Instead, they won 13 more games than expected, making them the luckiest team since 1905.

Greenberg goes on to point out that of the other four teams to win 10+ games more than expected since 2006, one didn’t even make the playoffs, two lost handily in the LDS round, and the other was swept in the NLCS.

Despite their middling bullpen, the Rangers finished an astonishing 36-11 in one run games. Even though they had the best record in the American League and posted 95 wins, they only scored 8 runs more than their opponents on the season.

This is an exceedingly average baseball team. Read this wonderful FiveThirtyEight.com piece if you have any further doubts.

With that said, in a 5 game series, I’d put my money on seeing Hamels in Game 1 and 4 (on three days rest) and Darvish in Game 2 and 5 (on normal rest), so the Jays will certainly have some work to do.

And they better watch out for those damned horseshoes.

Dan Grant is an editor at the Same Page and a contributor to SB Nation’s Raptors HQ. He can be found on Twitter @SlamminDannyG.

4 responses to “Jays-Rangers 2.0: Toronto Will Indeed Mess With Texas”