Blue Jays fans, it’s time to face the music. To hear some news that you don’t want to… uh, hear. Wait, I’ll get it. It’s a notion SO WILD that it will make you kick and scream about the normal Toronto sports stuff: Rogers being cheaper than a pair of dollar store slacks, the new ‘American’ management trying to to commit the crime of turning us into Cleveland North, a lack of loyalty in modern professional sports. All of those things you normally yell at your radio/friends/children/therapist(s?).

The Blue Jays need to move on from Edwin Encarnacion. Not only that, but they need to do it for baseball reasons. They’re lucky he didn’t accept their reported 4 year/$80 million dollar offer, which was far more likely to be a disaster than a success.

I’ll give you a minute to sweep up the remains of your mobile device and find a new one.

Calmer, yet still exploding with rage? Hear me out. If you still don’t agree, you can continue to do absolutely nothing.

Edwin is no spring chicken. Nice extension though.

Edwin wants a five year deal, which would take him through his age 38 season with Toronto. While he was something of a late bloomer, he’ll already be 34 years old when next season begins. That’s not ‘aging’, it’s old already! It’s a real factor, and is something that could quickly become a slippery slope. I’ve heard many a fan shrug this off, explaining how these deals are less risky now because more and more players are productive as they get older these days. That’s just not true. While we’ve seen some high profile guys like David Ortiz, Carlos Beltran and Adrian Beltre pull it off recently, the overall numbers are actually holding fairly steady — and they’re not big.

Just 28 players age 34 and over garnered even 300 plate appearances in 2016. Only 17 of those 28 had enough plate appearances (502) to qualify for the batting title. Just nine of those 17 were worth 2.0 WAR or higher, per Fangraphs. Remember, this is the age Edwin will be in just his first season of a potential 5 year pact.

Make the parameters age 35+ (or season two) and the entire list shrinks to twelve names, with only seven surpassing 2.0 WAR. 36+? Eight total, five over 2.0 WAR. Unsurprisingly, the numbers (and production!) keep shrinking, and we’re only at a theoretical season three.

Since the year 2000, there have only been 44 total players aged 37 and over who achieved a a qualified season at the plate. There were 858 total players who completed qualified seasons over that same time frame time. Players age 37 and older account for only about 5 percent of that number. An additional 129 players aged 37+ submitted seasons of between 100-500 at bats in those seasons, meaning they either struggled with injury or were relegated to lesser roles. A further 185 players submitted seasons between 0-100 at bats, meaning they were essentially useless. It’s an anomaly just to keep these older players on the field, let alone get production out of them.

If you give Encarnacion that five year deal, you’d be asking (hoping, praying) that he could join the 5 percent. Be a part of the 44 instead of the 129 or (gulp) the 185. Those aren’t great odds. Yes, it’s possible he could be the next David Ortiz. But history says that the deck is stacked against him.

Unfortunately, these men also require that you pay them money to play professional baseball

Some other fans will tell you that those last two years are accepted risk, that you’re really only hoping for production in the first couple, three at most, and the others are like a tax you pay for the initial elite seasons. These Jays are built to win now!

I understand the reasoning behind this argument, and even think it makes sense in certain cases, but not when you’re signing a player like Encarnacion. A productive season (even just one!) at age 34 is far from a sure thing. Beyond that, a self-imposed ‘tax’ like that is something you want to avoid if you can, particularly if you’re the Toronto Blue Jays as currently constructed. You already have contracts at 20 million per season for Russell Martin and Troy Tulowitzki into their mid thirties. You just signed Kendrys Morales for his age 34-36 years. You’ll (likely) want to try to extend Josh Donaldson on a pact that keeps him around beyond his next two seasons of control, at which point he’ll be 33. Your team core — not just for 2016, but for 2017, 2018, 2019 — is suddenly terribly old if you lock Edwin in for another five seasons.

You’d also have anywhere between 31 and 36 million committed to Encarnacion and Morales for the next three seasons, which given their lack of versatility, is less than ideal. I’ve heard the statement made that Toronto figured out how to play Edwin, Justin Smoak and Chris Colabello together in 2015, so they could figure this out too. It’s true, technically. But those guys were making what? A combined 13 million? Smoak was DFA fodder, Colabello a shot in the dark, and Edwin on a bargain basement deal. They were like finding a 20 in your jeans (or a 100 in the case of Edwin). This new version would have the guys making around $40 million per year. It’s a poor allotment of assets, and one I can’t see the prudent Shapiro/Atkins front office making, if it’s for a penny more than they feel is reasonable. 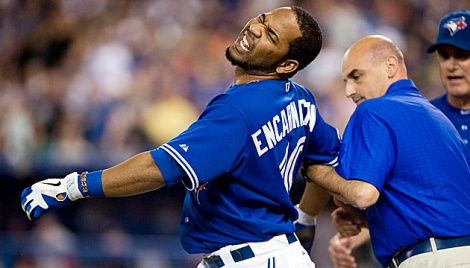 A too familiar sight over the past several seasons

It would be one thing if Encarnacion was a durable player beyond reproach, someone who had been incredibly consistent in his ability to take the field over his tenure with Toronto. If you look at his stats on the surface, it seems like he’s been mostly fine — the fact that he appeared in 160 games for the Jays last season might have clouded the memories of some fans.

The fact is that before last year, he missed 81 games over the prior four seasons, or an average of about 20 per year. He always seemed to be battling some malady, even when he was in the lineup, be it a bad finger, an oblique pull, an aching shoulder, a tight quad or a bad back.

The back is the scariest one when you consider signing Encarnacion into his late 30s. A power hitter that swings as hard as he does, who had to be moved to primarily a designated hitter role at age 30 because of a wonky back is not the ideal guy you commit to on a deal like this, regardless of his production.

If there’s one thing that you can’t question about Encarnacion, it’s his ability to hit the ball. He’s supremely talented, and when he goes on one of his now-patented hot streaks, few are more fun to watch at the plate. Here’s the thing though — baseball isn’t just played at the plate. It’s played on the basepaths and in the field too. For Encarnacion to be worth the kind of money he’s asking, he can’t just be a designated hitter. There’s a reason no dedicated designated hitter has ever made more than than the 16 million David Ortiz was paid last season. He’s got to be an everyday first baseman for the majority of the contract.

Can he handle that? Can he produce in other areas?

Encarnacion has been a negative baserunner per Fangraphs BsR statistic the past two seasons. It’s not a big part of his game, and he’s close to a wash, but he’s still a negative. No surprise there, and something that’s likely to continue its slow decline — he’s gone from slightly above average in 2012, to totally average in 2013-14, to slightly below average in 2015-16.

In the field, he logged 636.1 innings over 74 starts at first base. He’s graded out as an exact zero over the past two seasons in Defensive Runs Saved, meaning he’s the definition of average. His UZR shows that he has OK range, just a tick above average and something that might help his production in this area if extrapolated over a full season at the position. He’s not a bad first baseman, by any stretch. He’s unlikely to get better, but he won’t hurt anyone out there.

So his secondary abilities are fine. For now.

His Ability To Hit the Ball

I know I just said this is unimpeachable, but I fibbed. Encarnacion, while having a wonderful 2016 at the plate when compared to an average hitter, has already begun to see decline in his most potent skill set.

His swinging strike rate rose to a career high in 2015, and that number held steady around 9.4% in 2016. He actually decreased the percentage of pitches he swung at outside the zone, posting a career low 23.6% in this number — however, that means he’s swinging and missing at the same rate, but the pitches are now in the strike zone. Not a good development. In 2016 he posted his lowest overall contact rate (77.9%) since his 2005 rookie season with Cincinnati. His contact rate on pitches outside the zone might be the answer for the dip — in 2013, he was making contact on 74% of pitches he swung at outside the strike zone. In 2016, that number had sharply dropped to 62.4%. So while his swing rate at pitches outside the zone has dropped about 4% since then, his contact rate on the same type of pitch has dropped nearly 12%.

After posting nearly identical stats in keys areas like Weighted Runs Created (wRC+) and Weighted On Base Average (wOBA) since his breakout in 2012, Encarnacion posted his worst numbers since then in each of those categories last season. His career high of 138 strikeouts was certainly inflated by the career high in games played, but he jumped from a steady K rate of around 15% since 2012, all the way up to 19.8%. His wOBA, between .389 and .396 from 2012-15, dropped to .373 and his wRC+ ranging from 146-151 in the same time period, dropped to 134.

This production is still great, but the overall trend is in the wrong direction, particularly for a player whose strength is so concentrated in one area.

So what exactly are we looking at here? Take the name and the sentimental attachment off our beloved parrot walker and read the cold hard facts.

A power hitting first baseman with declining (though still strong) offensive statistics, coming off a career high in games played, who’s played less than 50 percent of his games in the field since 2011 and is average at best when he does, who’s a net negative base runner and is going to be 34 years old when the 2017 season begins. Not to mention a somewhat checkered injury history. Does this sound like a candidate for a five, or even a four year contract to you?

Look, this gives me no joy. I wanted him back too. I love Edwin and will have nothing but wonderful memories of him. I’d have ridden with him to be the next Ortiz, stats and trends be damned. If I could go back in time, erase the Morales signing and focus completely on Edwin, I would do that. But we can’t. And if what we really want as fans is the long term success of the ball club instead of our bat flinging security blanket, we shouldn’t try. He’s a square peg in a round hole at this point, I’m sad to say.

We’ll always have the Mic Drop.