John Struges‘ Bad Day at Black Rock is a lean 81 minutes, largely set in one sparse locale, and driven by perhaps the most basic of narrative conceits: a stranger comes to town. While the film is not a golden age Hollywood “message” movie per se, it does indeed have something to say. After viewing it in 2017 and reflecting on its origins as a short story first published 70 years ago, what’s most remarkable is how malleable that message turns out to be.

Opening on a red train cutting across the landscape, Bad Day at Black Rock looks to get somewhere in a hurry. It comes as a surprise, however, when that somewhere turns out to be the dusty nowhere town of Black Rock. The train eventually disappears from view, leaving only the figure of John J. Macreedy (Spencer Tracy) in its stead on the edge of town. Macreedy may only affably stroll into town — one hand clutching a suitcase, the other lost during WWII combat — but it’s clear his forward momentum is equalled only by that steaming train. As far as visual metaphors go, this is a pretty good one. The film’s economy continues to pay off from there.

Macreedy’s presence in town is greeted with the same surprise as the train’s stop. No one has visited Black Rock in four years, which suits the men of the town just fine. They’re divided, somewhat inevitably, into two groups: the leaders and the followers. In the latter camp there’s sweating telegraph man Mr. Hastings (Russell Collins), rumpled Doc Velie (Walter Brennan), and drunk Sheriff Tim Horn (Dean Jagger). In the former we have our antagonists, the laconic town bully Hector (Lee Marvin), the less laconic town bully Coley (Ernest Borgnine), and their head, the cool Reno Smith (Robert Ryan). Folded neatly in between these two groups are Pete (John Ericson) and Liz Wirth (Anne Francis), a young brother and sister, whose allegiances are very much up for grabs. The plot thickens from there, so keep all these names in mind.

Spoilers ahoy for a 62-year-old movie!

Macreedy is in Black Rock because he wants to pay his respects to Komoko, an old Japanese man. Turns out his son Joe saved Macreedy’s life in Italy during the war. It’s a simple desire but for one tragic fact: Komoko was killed four years ago by the very townspeople currently getting up in Macreedy’s grill. You can already guess who led the charge. Denied a chance to go overseas and fight, Smith is angry — at Japan for attacking Pearl Harbor, at the Japanese for existing — and he takes his rage out on Komoko. We never see this happen in the film, but we can picture it; a drunken posse, including Coley, Hector and poor dumb Pete, descending on the house at night, a house fire ignited, bullets exploding from a gun. The other men who live in Black Rock are intimidated into silence by Smith and his crew. Guilty to a man, they too are tarred by the incident; their silence implies consent and acceptance.

Of course, the townsfolk can’t just kill Macreedy too. He’s a veteran, and a white dude, and also a tough son of a gun (even with only one good arm). Smith and his cronies go about trying to goad him into a confrontation, but Macreedy plays it cool. (Despite being too old to be a WWII vet or much of a threat physically, few actors can emit decency and power as well as Tracy.) Macreedy just has to live to see the next day’s train arrive and then he’s gone. It’s a narrative right out of the High Noon mode of Western storytelling, complete with the marshalling of forces on both good and bad sides of the equation. The aforementioned followers do what they can to abate their shame, Smith and his men scheme, and Macreedy does eventually confront the lot of them, dishing out a fiery end to Smith not unlike the one delivered to Komoko. Then Macreedy jumps back on the train — making just its second stop there in four years — and returns to his life. 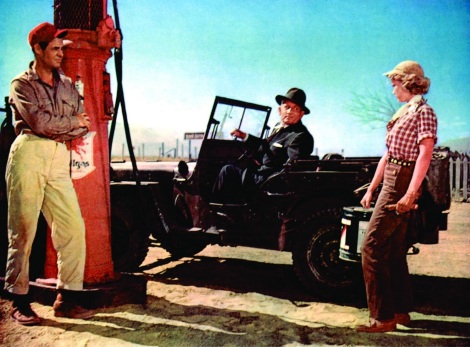 For such a slight film, there ends up being a lot to unpack here. On the surface, it’s easy to see Bad Day at Black Rock‘s pointed case against America’s own racism and xenophobia. It’s a film which comments directly on the intolerance of the Japanese internment camps, and the general unwelcome vibe radiated towards all people who don’t “fit in.” It’s telling there are no actual Japanese people in the film though. This is partly due to Hollywood’s own inborn prejudices, but it also symbolizes something else. It’s as if this gaggle of white people, left behind in the desert and the ways of the Old West, have to decide just who they are so as to be let back into future society (via that glimmering train that never stops in their town). As a message, it’s one that continues to resonate right on up into the present day.

When we consider the era however, there is another layer to the film. Bad Day at Black Rock came out in the 50s, at the height of the House Un-American Activities Committee’s power during the Red Scare. As friends and co-workers were named and blacklisted, it’s clear Sturges was saying something about a person’s choice to stay silent in the face of extreme injustice. But even deeper than that buried historical context, there’s a more elemental theme at work here about man’s shame in the face of his own inability to act. No character is left untouched by this sentiment. Smith, for example, hates that he couldn’t go to war to prove how macho he is. That he eventually turns on those around him is a classic case of toxic masculinity in action. (It’s not particularly difficult to draw a line from Smith to Senator Joe McCarthy, a cartoon bully come to life.) Smith’s henchmen Hector and Coley are worse in their way, only able to express themselves through threats or violence. Like most dumb bullies however, they are easily dispatched with the most modest of forethought (and karate chops; for real). For the rest of the townsfolk, men like Sheriff Tim, Doc and Mr. Hastings, there is a more thoughtful reckoning. Broken down to a man, they hate themselves for being cowards. And they all wilt one way or another in the face of Macreedy’s dogged certainty and confidence.

But the two figures I can’t shake are the Wirth siblings, Pete and Liz. When we first meet the former, he’s a jittery clerk in the town hotel. Like any youth in the thrall of a strongman, Pete is willing to follow orders and fall in line. He’ll even go along on a bit of violence if it means no harm will come to him. But it’s not physical violence that spurs Pete to action. He, like the town elders, must reckon with his own guilt — and, more specifically, his role in what happened to Komoko. Liz, on the other hand, is introduced as a spitfire. She admits to staying in town just to keep her (dumb) brother safe. She’s the first to step out and help Macreedy, renting him a jeep to make a visit to Adobe Flat and the scene of the crime. Bad Day at Black Rock‘s late act twists come from these two siblings. Pete, urged on by Macreedy’s interrogation, confesses to what he witnessed with Komoko. Then he radios Liz with a plan to smuggle Macreedy out of town, but not before luring Hector into a trap sprung by Doc. That leaves only Smith and the climatic confrontation.

Macreedy confronts Pete for the first time (of many).

The finale of the film is instructive to our current moment, highlighting something generational. The surprise twist has Liz aiding Smith in a mistaken belief she can save her brother from harmful retribution — for doing the right thing! — and perhaps set the town back as it was. There’s no truly going back to peace in Black Rock, but at least the men of the town won’t be parading around actively trying to kill the next visitor. That’s her thinking when she leads Macreedy right into danger. And it’s then that the film’s soul is laid bare in its harshest moment. Staring up into the lights of Smith’s parked car, on the hood of which he rests with an aimed rifle, Liz quietly pleads. “I did everything you said …. Why start with me?” Smith’s measured response is as chilling as Liz’s is desperate. “I gotta start with somebody,” he says, before pulling the trigger in her direction.

Bad Day at Black Rock is perhaps far down the list of films that define our current era. And yet, if you were wondering what it means to be a “millennial” in 2017, the aforementioned scene provides a neat visceral summary. It’s been spoiled for you here, but watch the film anyway and let it sit in your mind. Then reflect on the urge to maintain the “old ways,” to thwart progress, to attack anyone different. Think about where aligning with a strongman and mindlessly doing his bidding takes you. Wonder about where the abuses of power eventually lead. Consider that climactic scene and remember: You can’t do anything right by those clinging to the past because their future is not yours. Like their cinematic forebears, they are not willing to give up what they feel they deserve, what they feel they own, or what they believe they should control. At least not easily.

Despite being something of a strongman himself, albeit one who knows when to step aside, Macreedy intuits the heart of this sentiment as well. Before leaving Black Rock for good, he looses a few words pitched on an angle of hope and despair. Doc Velie is there too, dreaming of the town’s eventual rebirth now that it’s free from Smith’s clutches. Does Macreedy think the town can come back? “Some towns do and some towns don’t,” he says. “Depends on the people.”