It’s tough to watch a team relocate, even if they’re not your team. Whenever you see, for example, the San Diego Chargers moving to LA, you wonder, even for a minute, if any of the teams in your city might consider moving. You check on the age of your team facilities, and you listen more closely to team presidents and owners to see if they are hinting at needing a new stadium or making comments about team revenue and attendance.

You’ve formed an emotional attachment to your team, and watching a competing team relocate is a reminder of what could happen to you.

Personally, I despise watching teams relocate. It’s hypocritical. It’s the league telling us that this is just a business while asking us to form that emotional connection. Watching the stadium funding dance is a bright and shiny example of the 1% of the 1% getting the rest of us to give them money and using our allegiance as a hostage in order to get it. I despise watching them lie with bogus economic ‘data’; tricking the sheeple into believing their tax dollars are being put to good use, while knowing they just want a new toy to make them more money, and garner them more prestige.

The media can get caught up in it too, using terms like “revitalization” and “re-energizing the downtown” in their articles and interviews. The journalistic integrity goes out the door as they become talking puppets for the owners, trying to get the fans on their side to pay for these boondoggles.

So here, just to be a buzzkill, is a comprehensive list of the lies they throw at you in an attempt to win your (the taxpayers) money. If you, the taxpayer, builds me, the billionaire a stadium, the following will be true:

The Economic Benefit is Hundreds of Millions of Dollars

Lie, lie, lie. The economic benefit of a stadium is negligible. It’s a complicated economic analysis to explain exactly why it’s negligible, and it goes into a bunch of hypotheses around permanent income, consumer behaviour, and opportunity cost (surprise! I’m an accountant) but to simplify: a major stadium generates about as much economic benefit to the city as a Wal-Mart.

But you would never pay for a Wal-Mart, so they use this ‘downtown revitalization’ as a carrot for you to build them a stadium. This fun little game is played through bright lights and shiny things, IE visual presentations of downtown [insert your city here] 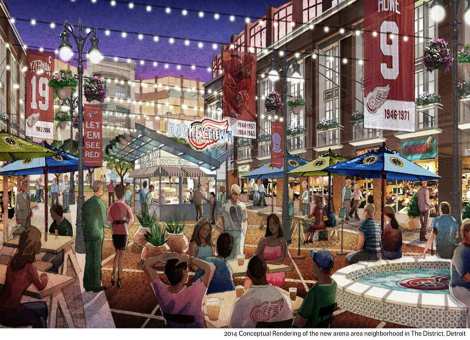 People (preferably white; just look at the ‘artists rendering’) sitting on patios drinking and wearing t-shirts in February before a hockey game is all the statistical evidence you need that economic activity is being generated right?

But think about it this way, if you weren’t at a bar downtown where would you be? Probably at a bar near your house, drinking the same amount of drinks. So how much economic activity is being generated? Nil. What it doesn’t show is the 15 restaurants elsewhere that are empty because that one square block is full. How much net economic activity is that? Again, nil.

The fact is every independent economist report states that building a sports stadium has virtually no benefit to the local economy.

It Won’t Cost You Anything

Another lie. If building a sports stadium doesn’t cost the taxpayer anything, then why say it? Just build the damn thing. But they need approval from local governments to implement a new tax to pay for their new toy. Taxes cost you something right? Even a hotel tax does because (1) a significant amount of hotels are actually used by people who live within the same state/province, and (2) You could just as easily implement a hotel tax and use this money to actually pay for things your community needs, maybe even an arena that members of the community can actually use!

So does paying a bunch of people to dig a hole, and then paying them to fill that hole. And you don’t get hit with cost overruns when you dig holes. Or have to pay for maintenance. Here’s some things San Diego can do with $1.1b[1] of previously discussed about stadium money that also creates jobs:

But the Approval of Your Elected Executive Stadium Finance Steering Committee!

Ohhh sounds complicated; they must be good if they used the words executive and steering. That’s big corporate speak. The truth is the smaller the committee, the easier it is for one idiot to approve the funding of your tax dollars to pay for a billionaires toy without allowing you a say in the matter.

The Cob County Commissionaires, responsible for subsidizing the Atlanta Braves new debacle, skirted laws about ‘open’ meetings by holding them in hallways, so they didn’t have to have a session open to the public. I’m not making this up[7]

Don’t You Love Your Team?

Isn’t that the same logic used in ransom demands? The only difference here is your team isn’t literally your baby. And that kidnapping is illegal…

How About Some Pump Up Videos to Convince You?

These are the key arguments billionaires and corrupt city officials use to try to scam you out of your money being spent on actual infrastructure projects, and towards their expensive toys. They are all oversimplified, emotionally charged, exaggerations of reality mean to goad you into forgetting your local hospital is crumbling, and your city could better use new taxes or spending on real infrastructure projects.

And if you think, hey its only greedy Americans who try to pull this scam, have a look here.

So many white people…

[6] OK, this doesn’t create jobs but the income earned can be used to pay for some of the other things.

2 responses to “The Stadium Dilemma: Who Pays For It Anyway?”