Of all the on-the-nose elements of Logan my favourite happens early on. After an intro involving a band of carjackers and a rudely awoken Logan — one in which we see exactly how far this film is willing to go with its violence — we get a calm meeting with an incoming villain. Donald Pierce (Boyd Holbrook), a so-called Reaver, with one robotic hand and a southern accent, explains that he needs Logan’s help to find a missing girl. The evil intent here is obvious, but Donald’s speech ends with a pleasant summation of why this film even exists. As he gets out of the car, Donald tells Wolverine, one of the most enduring and popular characters of the past 30 years: “I’m a fan.”

As the final instalment of James Mangold‘s Wolverine films starring Hugh Jackman, we knew Logan would be funereal in tone — conclusions often are. So it goes with this film, as we meet a heavy drinking, broken down Wolverine and his wards: the senile, drug-addled Professor X, and his aide, the creepy albino Caliban (Stephen Merchant). Here of course, they’re just Logan and Charles (and, uh, Caliban), two old men nearing the ends of their respective roads. And while Jackman is definitely not above getting dirty for a role — such is his level of commitment to Wolverine and every role he’s ever had — it comes as a shock to see Patrick Stewart, always so upright (even while sitting in a wheelchair), as the decaying professor. His character has the most powerful mind on Earth; it just so happens he’s also losing it. This is the starting point of Logan.

Candid photo of Logan saying hello to his visitors.

But anyway, that girl; her name is Laura. As played by newcomer Dafne Keen, she’s both MacGuffin and active participant in Logan‘s plot. A nurse, Gabriela (Elizabeth Rodriguez), pushes her onto Logan, insisting he be the one to keep her safe. Since the Wolverine-and-young-girl trope is well established by now (see: Rogue, Jubilee, Yukio), Logan rises to the challenge. As expected, he has strong reaction to seeing another person conscripted into shady medical experiments by scary corporate overlords. Or it’s possible Logan sees something in Laura, like the same claws (and vicious fighting ability) he has. There’s a natural kinship there, and you don’t have to think too hard about what it means. Laura’s presence in the film, after meeting the rest of its broken and/or dying characters, definitely livens things up. Though it’s icky that Mangold, along with writers Scott Frank and Michael Green, use the real life plight of Mexican women disappearing in the desert to suggest her genesis (and that of other children with powers), the thrills of the film’s R-rated action eventually kick up and overwhelm anyway. That’s the, uh, point.

If it’s not already clear, this film is violent. Logan has decapitated heads, men getting stabbed through the cheek, limbs sliced from bodies, and a sense of malice about the whole thing. Sure, Logan and Laura are fighting for their lives here but hoo boy, it can get to be a bit much. That the film gradually assembles an educational theme — with Logan urging Laura not to become a monster — seems almost laughable. Logan wants to have it both ways, as it tries to be against the idea of violence while also revelling in the mayhem it now has license to portray. By the time Charles, Laura and Logan are watching Shane, it’s hard to roll your eyes at this kind of forced solemnity. When Logan and crew later wander into a neo-Shane situation featuring Eriq LaSalle as a farmer and family man, Logan‘s two forms collide — one a throwback western, the other a mutant comic book. As the film ejects itself into its third act, complete with the oily Dr. Rice (Richard E. Grant), an unleashed X-24, and a trail of bodies, it’s clear which of these has won. 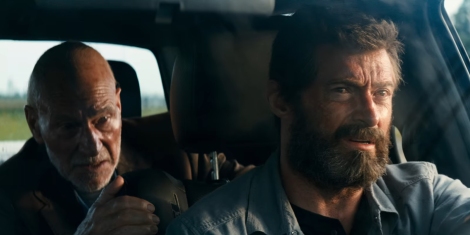 A western, a road movie, a buddy comedy, Logan has it all (and claws!).

When the X-Men series first began, way back in 2000, it was essentially the first and only of its kind. Yes, there had been Superman and Batman movies, but here was a team comic book making the jump, one with a Silver Age origin and a continuity as complicated as any in the history of the medium. Most would say Marvel’s Iron Man movie launched our modern state of the blockbuster (and technically they’re not wrong), but X-Men still provided that first beachhead, the idea that a massive collection of characters — with their goofy costumes and complex backstories — could work in a film. Far more than Shane, Logan most effectively, and subtly, draws from that first X-film and the subsequent series to provide its emotional resonance. This is where it’s harder to resist becoming a fan.

For some of us, we’ve come a long way with these characters. It goes back to the early 90s for me; even further for others. The most powerful idea Logan puts forward is this consideration of time. As technically brutal as it is to watch Logan fight X-24 — a younger version of himself — it’s a striking image. Both character and movie star, raging against the dying of the light. The tragedy of Logan’s character has always been the understanding that he alone will live to see everyone he knows die. Ironically, so it is with Jackman too, the lone man to appear in every X-film. That Logan begins and ends with nary a mention of Jean Grey, or Magneto, or anyone else from that earlier time, is telling. The film instead brings actual X-Men comics on-screen to evoke the mythic idea of these characters. They are somehow timeless and running out of time.

I’ll admit I cried at the end of Logan, struck as I was by the emotional echo of its final images. To see Logan, and Charles by extension, as these small, sad, and desperate figures, is heartbreaking. They began together in 2000 (or somewhere in the 70s, if you prefer), and sought to right the world’s wrongs; they were filled with hope — guarded at times, sure, but always present. Logan is a bit too morose at times, and too pleased with its Shane comparisons. The film’s final third drags on a bit too long, and the violence does get to be too much. But for some of us, X really does mark the spot, regardless. We won’t see Stewart and Jackman in an X-Men film again. May they rest in peace.