After watching the pilot episode for HBO’s new Sunday night drama The Newsroom, I was admittedly enthralled with the rapid fire dialogue and the clever melding of real news events of the past with fictional drama.  I was tempted to write about the show right away, mostly to contradict the critical bashing of the show across the web.  However, after watching the first 3 episodes in their totality, it seems those pesky critics were on to something. 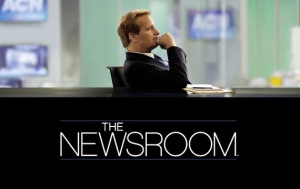 Most troubling for Sorkin is the less than subtle purpose of this new drama being contradicted by the drama itself.  This dilemma can be summed up as such: Personal politics and ideology don’t belong in the Newsroom! Well, except for our TV Show coincidentally titled “The Newsroom”

I make no secret of my liberal, progressive, left-leaning ideology.  While this does not make me an advocate of any particular party or politician, it no doubt influences the way I see the larger world.  However, even for a guy with a ‘left-wing Pinko’ button on his work satchel, the self-righteousness and condescension of opposing conservative ideology on the The Newsroom borders on offensive for any able-minded, rational viewer.

The most troublesome and dangerous idea perpetuated by the new drama is the confluence of honest, moral reporting with liberal and progressive talking points.  Our cable news hero, Will McAvoy (Jeff Daniels) sets out to revolutionize modern news by only presenting the facts and not opinions.  However, the ‘facts’, slowly but surely, become the foundation of liberal/progressive ideology.  McAvoy’s daily ‘NewsNight’ broadcast bravely sets out on this new ground of honest, non-partisan reporting by aggressively attacking only Tea Party candidates, defending President Obama, appearing to be pro health reform, and approaching base Republican ideology (pro-life, anti-tax, creationism) with just the right mix of disdain and condescension.  To pacify viewers who may pick up on this contradiction and obvious bias, Sorkin reveals Will McAvoy is indeed a Republican who wants to bring his party back to sanity.  Message to Sorkin: don’t make your Republican protagonist sound like Bill Maher.

The politics of The Newsroom is everything that is wrong with the TV show and the news itself in reality.  Wait, wasn’t this show supposed to show us just the opposite?  Nothing can be more emblematic of this ethical confusion than a scene of cable news executives evaluating the value of NewsNight’s new direction.  McAvoy’s ally pleads with the execs that “Facts are the center!”  However, this is almost immediately followed by an egregious statement that the 2010 election gave the United States the “most dangerous and idle-minded congress in our lifetime.”  Even worse, McAvoy’s crusade against people like Michelle Bachmann is likened to Edward R. Murrow’s crusade against Joseph McCarthy.

So, in The Newsroom’s quest to end partisanship with honest reporting, it melds the truth with liberalism and fulfills the partisanship stereotype of the “liberal media bias”.  This is not just a self-fulfilling prophecy, but the worst kind of all: one that is not intended.

The most obvious reason for statements and attitudes such as these in the writing is the guaranteed 20/20 hindsight that the narrative structure provides.

By looking at actual events from years past (ex. BP Oil Spill, Congressional Elections) it robs the writing of any semblance of realism, while ironically using real life events.  What a twisted web.  The problem is that journalists and news media icons are judged by history, well after their careers are over. That is where the admiration for the Murrows and Cronkites came from.  There is a general acknowledgment by the public that these men ACTUALLY took risks in delivering the news in the way they deemed responsible. They did what makes us admire them like how any artist or politician attains admiration and respect: through their allegiance and dedication to their own passionate convictions.  So while the viewer can admire Will McAvoy’s intelligence and interrogation skills, the viewer is hesitant to admire the character because we all know that he is not desperately seeking the truth, rather, he is being written by someone who already seems to know what the truth is.

No matter its many faults, I still feel myself drawn to this drama.  The best parts of the show are the characters in the newsroom itself, not what seems to be Sorkin’s grandiose dream of a wakeup call to the modern news media.

Sorkin’s gifted writing of witty banter and well-informed retorts will take any viewer’s memory back to the compelling and wonderful opening scene of “The Social Network”.  With these words injected into a stellar cast, The Newsroom does have the opportunity to become something special. 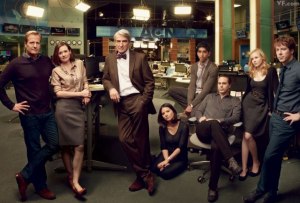 Alison Pill, the quickly promoted Assistant, is probably the cutest woman on TV, and almost the cutest TV character to have panic attacks (Tony Soprano loved the ducks in his pool!).  Emily Mortimer is believable and lovable, even in her heavy-handed role as the indelible modern news conscience and McAvoy’s Executive Producer.  Sam Waterston is often the speaker of some misguided statements (see above), but his irredeemable faith in Will and his ability to change an irrevocably damaged news paradigm makes him the most endearing drunk executive since Roger Sterling. Jeff Daniels is strong in his rapid dialogue and fiery personality (although every time he yells, he conjures up Harry Dunn to me.)

Many of the plot elements and devices in The Newsroom are clichéd (young love triangle, mid-aged romantic bad blood, veteran morality finally overcoming pragmatism, etc.). But they all work on an emotional level through the occasional strength of Sorkin’s writing and the consistent strength of the cast.

So The Newsroom has its high points and definitely has its low points. However, the work of Aaron Sorkin, HBO and Co. definitely trumps any show on network TV, sadly including the actual newsrooms at CBS, NBC, ABC and CNN.

After my Sunday viewing of episode three, the last thing I want to sincerely write regarding this intriguing new drama is ‘good night, and good luck.’

2 responses to “The Newsroom: A Possible Hit with Definite Misses”