So, Magic Mike has been out for a little while now. Have you seen it? My girlfriend convinced me that it was her turn to pick the movie for our next visit to the theatre.  What could I do? Really, my hands were tied. We saw it and she was happy. But I have a secret to share here: I actually really wanted to go see Magic Mike. You know why? Because despite all the talk of (half-naked) men involved in this movie, the most significant one – the name that seems to always be mentioned last in the discussion – is Steven Soderbergh.

You see, Soderbergh, along with possibly Michael Winterbottom and, I don’t know, Paul Thomas Anderson, is one of the more versatile directors working today. Go ahead, look through his diverse list of projects. You’ll notice that he can handle big budgets and big stars (Ocean’s Eleven, Traffic, Contagion), or deal with movies so small and specific they fall under the radar’s radar (Bubble, The Girlfriend Experience, And Everything is Going Fine). Sometimes he shoots off with a wild experiment as if to periodically challenge himself to make it work (he remade Solaris, then filmed The Good German with only vintage equipment). When I read that he had decided to film a movie about male strippers in Tampa, Florida staring Channing Tatum I didn’t even blink. I trusted. 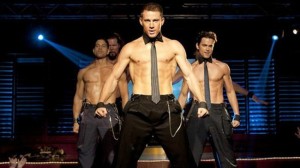 Channing Tatum and his co-stars. Plus some other dudes.

OK, so yes, let’s get this out of the way: there is Channing Tatum, as Mike. He works construction, he considers himself an entrepreneur and, as the movie frames him, he may be the best male stripper in Tampa (well, at the very least, he is better than Kevin Nash). The film wastes no time in, umm, showing us why the ladies like Mike. As with Tony Manero before him, once in the club he is invincible, in his ultimate comfort zone, triumphant as his stripper alter-ego, Magic Mike.  Granted, maybe it isn’t much of a stretch for Tatum to play a dancing piece of beef cake, but alternatively, can you picture anyone else in this role?

Just as an aside here, Tatum’s career really cannot be measured by any comparable metric. He’s becoming a successful, bankable star almost in spite of himself, if that makes sense. He’s popped up in everything from the sappy (The Vow, Dear John) to the ridiculous (G.I.: Joe, Fighting) and now appears to be claiming 2012 as his own (so sorry, Taylor Kitsch).

Soderbergh seems to be just as aware of this tidal shift in popularity as the audience is, knowing just how to maximize Tatum in all his jock bro glory. To Tatum’s credit, as the film moves outside of the club, into the daylight, and Mike’s titular magic disappears somewhat, his performance stays on target as he reverts to just plain Mike; struggling businessman and dreamer.  There is a great scene early on, as we first meet Mike’s stripper protege Adam, when he chastises the kid for picking at the plastic dashboard covering on his truck.  “It’ll protect it so when I sell it it’ll be like new”, he says.  A little detail, maybe, but one that I like; showing, as it does, the character’s ever present desire to embrace the unknown of a different, hopeful future.

Further away from the booming music, the looming romantic elements within the movie roam. We meet Adam’s sister, Brooke, overly protective of her loser brother and wary of the surface of Mike’s lifestyle. Soderbergh shows a great casual touch with the camera, allowing these conversational sequences to breath through the charisma of the leads. He films these and other quieter scenes with such a great eye for detail and colour.  The blank walls of backstage, the seedy opulence of Dallas’ (Matthew McConaughey, never better as the Xquisite nightclub owner) home of excess and the golden beach hues of an abandoned island are filmed with arresting skill. It takes a special director to make a scene set at a picnic table next to a go-kart track beautiful, but Soderbergh manages it.

As the film rolls into its third act, with Adam off the rails and Mike calmly trying to hang onto his business dreams, I was actually reminded of another of my favourite movies of the year, Goon.  Now, here is a movie that is clearly marketed to sports fans and lovers of the crass, boorish comedy of jocks.  Yet, along with Magic Mike, it is also actually a really fantastic character study starring an actor (Seann William Scott) that had formerly been written off as one-note.  It too has great supporting characters (Liev Schreiber as an aging brawler from the Maritimes) and a believable central romance (thank God for Allison Pill).  And while Michael Dowse, the director of Goon is no Soderbergh, he understands the milieu in which he is working. 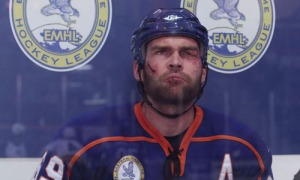 I wish more people saw your movie too.

Goon perfectly captures the world of small market minor hockey with its weird Russians, crazy goaltenders and moody French-Canadians; while Magic Mike is firmly entrenched in the sun blasted real estate of central Florida, with its gloriously schlocky nightclubs, small time snake oil salesmen, and seemingly endless supply of girls looking to have a good time.  Both films take concepts that cry out for a singular audience (dudes cheering on Goon, ladies sighing at Magic Mike), and instead create movies that should (and hopefully, in the long run, will) have a much broader appeal.

I digress. With all his recent talk of possible retirement, I feel like each new Soderbergh film should be valued as precious. Whether he is showing us the fast aging hard bodies of the male stripper world in Tampa, or working on a movie about Liberace (wait, those two ideas may be closer together than I thought), you just know Soderbergh is going to make it impossible to ignore.