Walter White is back. 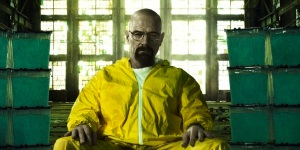 All hail the king.

OK, so, I watch a solid amount of TV. I get invested in shows. I feel like I’ve seen a lot. But I can’t think of another show that strings together as many tense scenes as Breaking Bad. Mad Men goes along at its even handed pace, Game of Thrones has its moments of intrigue, but, whoa, even when Walt is eating breakfast at a Denny’s we are riveted.

As has been proven again and again, Breaking Bad, and show runner Vince Gilligan, know exactly how to set the plates spinning. As he left last season with his foes defeated (in fantastically dramatic fashion, mind you), Walt appeared to have completed his transformation into a full-on villain.  He was longer under the thumb of any more dangerous forces (RIP Gus), back in control of his destiny. The new danger? Walt’s pride is now pure.

Remember in earlier seasons, when Walt would go into full-Heisenberg mode and bluff his way into or out of a situation? He’d narrow his eyes, and lower his voice and exert as much menace as he could. Back then, it still seemed like an act, like he felt he was smart enough to outwit anyone, but not exactly morally flexible or strong enough. Now, Walt is without fear, boastful. As an audience, we’ve been trained to expect pride to be met with humility. We assume hubris will be brought low. Yet, the continued balancing act of Breaking Bad, is that as unlikable as Walt’s actions are, we want him to succeed! Gilligan’s show has been pitched into a masterful arc of pure emotional manipulation.  The season 5 premiere reintroduced us to the problems: Hank continues to investigate, Ted Beneke is still alive, and, oh yeah, Gus’ mountain of security footage remains unclaimed. The audience so easily tumbles back down into Walt’s world and, like Jesse, we want to believe that he can save the day and win. Win what? The sick joke of the show continues.

Because, of course, we are on-board when Walt starts hatching his latest scheme (Magnets, bitch!).  We want to laugh along as he gooses the battery power up so high that their truck almost flips over. We chuckle every time Saul shows up and grin when Mike sigh’s enthusiastically. And hey, it’s “Bizarro Kramer” Joe from the junk yard! Some of us may even guffaw at poor Walt Jr.’s dogged earnestness.  We grit our teeth in stress, yet laugh as the show twists us around and around (as the best shows do), reminding us why we even bother to watch, searching, building towards that great knockout punchline:

Season 5 of arguably the best drama on TV gives the viewer a glimpse into Walter White’s future.  It may be about 2 years in advance but it’s emblematic of Breaking Bad’s core ethos and what lies ahead for a former meek chemistry teacher.

“I mean, it’s just– it’s the constant. It’s the cycle.  It’s solution, dissolution, just over and over and over. It is growth, then decay, then transformation. It is fascinating, really.”

A man of science.

These are the words of Walter White in the pilot episode of the series.  He is in his classroom, attempting to engage students in the study of chemistry.  It is a valid and passionate attempt that fails amongst a group of teenagers (I’ve been there…) but succeeds in engaging an audience in a series that will trace the deterioration of an ordinary man’s morality.  Every time I begin to watch an episode of Breaking Bad, these words of Mr. White become more and more prophetic and meaningful.

The first episode of the final season gives us another quote/phrase that encapsulates the new vision of our ‘hero’ (?) and will seemingly come to represent the end of the series and possibly the end of the mighty Heisenberg.  As Walt peers into the trunk of his new vehicle to discover a weapon of deadly force, the camera remains on the New Hampshire license plate which reads “Live Free or Die.”

Walter White began this series amazed, fascinated, and in awe of the beauty of chemistry.  His love for chemistry and his family is all that informed his life.  Now, merely a year later, live free or die, has become the statement that best represents this man.  After being diagnosed with cancer and facing numerous obstacles (health costs, a pregnant wife, a disabled son, and crippling debt) Walt decided if he was going to fight his sickness, he would do so freely or quite literally die.  He would not be shackled by the loss of pride in accepting what he deemed to be charity from past friends and would rather begin his career as a Crystal Meth master chef no matter the toll on his morality.  The moral price of this decision has become quite costly, but no matter, Walter White would rather die with his fate in his hands than live with the assistance of others.  This pivotal decision and its consequences are the basis of the series and the foundation of this character’s journey.  It is no surprise that the viewer is reminded of this man’s transformation and commitment to the New Hampshire motto on his 52nd birthday, a day of celebration of life’s beginning.  Sadly, one can only expect that death is on the horizon.

The consequences of Walt’s decisions, however, always stretch beyond the man himself.  Jesse, Hank, Marie, Walt Jr., Gustavo Fring, Mike, Crazy Eight, Tuco, Tio and many others have had their lives fundamentally altered or ended by the mighty Heisenberg.  The premiere episode of this final season puts on full display the transformation of Skyler White as well.

Skyler reacts to Walt’s latest reprehensible behavior with the usual repugnancy.  She tells him that she is scared of him.  However, as the episodes ends, we realize that Skyler has every right to be afraid of the person she has become.  She may act with dismay and disgust to Walt’s actions and deteriorating morality, but she is slowly realizing she is just as culpable.

While her fear of ‘the one who knocks’ is understandable and quite real, Skyler’s interaction with the immobile Ted Beneke reveals Skyler as the one who is feared.  She uses the threat of violence, intimidation, and manipulation to get what she wants, from whomever she wants.  Nothing will stand in her way of her family’s safety and freedom, not Saul, not Jesse Pinkman, and definitely not the IRS troubled Ted Beneke (of which she is at least partially responsible for).  However, much like her husband, she either thrives off Ted’s fear of her or is forced to play into it. Either way she uses her unusual predicament to ensure that she and her family are the survivors. Everyone else is expendable: live free or die.

Similar to Walt, Skyler is leaving a trail of death and tragedy behind her.  The growth, decay, and transformation of Walt has come to cause the same life-altering process in others.  Season 5 will undoubtedly continue to explore this in the rest of the cast.  No matter Skyler’s guilt and responsibility in this tragedy known as Breaking Bad, she rightfully fears that she may be left in the trail of death and tragedy of her beloved husband.  After all, the White family must “Live free or die”, which appears to becoming less of a motto and more of a death sentence.

One response to “Breaking Bad – Live Free or Die”