Expectations and hyperbole.  The two real villains of the Dark Knight Rises (DKR). Christopher Nolan’s epic Batman trilogy drew to a close this past weekend with the release of what many called the most anticipated movie of the year (possibly the last few years, even).  So, yes, expectations; to be great, to be better than the previous Dark Knight, to be a fitting conclusion. And now, the hyperbole (that I’ll try my best to avoid!); it is great, it does sometimes reach higher heights than the Dark Knight, it is, ultimately, a fitting conclusion. As The Dark Knight Rises drew to a close, I wondered whether we’d ever see a super hero movie quite like it (and this whole Batman trilogy) again. Even with some warts, what Nolan has constructed here is a rare thing, flying higher and reaching farther, broadening the scope of Batman beyond what some of us could have imagined.

A tad too heavy?

To begin with though, the movie tosses its audience into it’s expository-heavy first half. Batman is apparently retired, the city of Gotham has been cleaned up due to the Dent Act, the people are at a relative peace. If there is a weak leg to the film’s structure it is here, where Nolan has the enviable task of reminding us of the status quo from the Dark Knight while establishing multiple new characters and motivations. We very quickly meet Bane, the menacing villain; along with honest cop Blake, the alluring Miranda Tate and, of course, Selina Kyle, everyone’s favourite cat burglar.  Admittedly, DKR takes some time to get moving; with so many plates to start spinning, the audience is tasked with getting engaged with all of these people by only the briefest of sketches.  We know who the good and bad guys are, but we aren’t entirely sure how they’ll fit together yet (and the slightly overstuffed feeling to the first act doesn’t help).

However, the film cleverly establishes its plot on a balanced mix of trenchant class warfare tension and urban terrorist fears.  While the earlier Batman movies dealt in classic movie and comic book villain tropes from the rogues gallery of organized crime and wanton psychopaths, DKR is an exercise in modern nightmares.  To that end, Bane is an effective villain. While definitely not as iconic as the Joker (who could be?), Tom Hardy brings an immense physicality to the performance and sells the character despite having only half a face with which to be expressive. He is no Heath Ledger (again, who could be?), but his performance is solid and thematically rich. He is an element of both organized revolution and fascist control.

Bruce Wayne, as played by the forever intense Christian Bale, on the other hand, appears to be having a bad decade.  Since the events of the Dark Knight, apparently Wayne has become something of a recluse (interesting aside: Nolan had planned to make a Howard Hughes movie at one point), living in the gloomy shadows of his mansion, haunted by the death of his beloved Rachel. It admittedly comes as a bit of a shock that Wayne would quit so wholly despite the character’s 80 year motivation to fight crime no matter the cost[1]. But, in narrative service of the film, Wayne’s reluctance to take on the Batman mantle once again is couched in the absence of his fear of death. We see very little of Batman, and he seems to barrel into trouble without a thought, as if welcoming an end to his existential misery. Oh, did I forget to mention that this movie is definitely the most grim of the trilogy (and perhaps the most despairing of any huge, summer blockbuster films ever?). 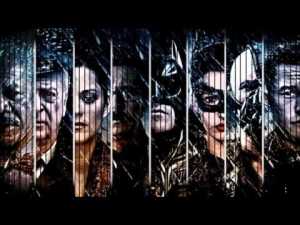 Unlike the similarly sized Avengers, DKR traffics in a much darker world and really to make comparisons between the two is irrelevant. However, much like its Marvel kin, it inspires the same sort of hyperbolic anticipation and reaction. It can only be considered the best or the worst.  In truth, I find it somewhere in the upper echelon of the middle. The film is not without some structural flaws and character missteps (re: my footnote), but it achieves something that movies of its size and scale struggle with: ultimately, we care about the hero and his friends, we buy into their conflict and are invested in their success.

In any case, I won’t get into anymore specifics of the plot except to say that it the stakes are suitably enormous (even if a bit familiar with Batman Begins). Suffice it to say, the old guard from Nolan’s previous movies return to great effect, and the new cast members (Anne Hathaway, Joseph Gordon-Levitt and Marion Cotilliard) are all strong additions, with Hathaway in particular shining in a very fun role. The resolution of the film feels both bigger than in Batman Begins and more smoothly constructed than the Dark Knight (lest we forget those awkward boat scenes in DK).

I expected the Dark Knight Rises to be very good. I expected the film to build on the previous films to fashion an ending to a series that has managed to significantly raise the bar for the future of comic book-based movies. While I’ll try to avoid using Roger Ebert to make my points for me, he used the word ‘honorable’ to describe the conclusion to the Batman trilogy. I think that’s a fitting adjective. Frankly, it feels impossible (more hyperbole!) to sum up what’s been managed over the past decade with Batman. With the Dark Knight Rises, through all the noise and hype, explosions and action, I applaud Nolan and his crew for, at the very least, reaching for something special.

[1] This is probably a hugely controversial point for some dedicated Bat-fans. While I definitely understand the problem with a Batman who quits, I was fine with a Bruce Wayne who had lost his philosophical bearings and reason for being. The film clearly establishes that he needed to be taken to the breaking point to regain his centre and focus. I figured that it made for compelling drama but obviously, your willingness to bend on this point may vary.