For a recap of NYC Week on the Same Page check here for Part 1, Part 2 and Part 3.

Toronto, I love you but…

My name is Nick Setacci and I am completely, unapologetically in love with New York City. Toronto has a lot going for it, and I would never live anywhere else in Canada. Hell, I make a point of doing my best to never leave it, unless it’s on an airplane. It’s clean, safe, affordable, livable, diverse, always changing…all that good stuff. Toronto is a fantastic city, one of the best; as are other big cosmopolitan cities like Chicago and San Francisco. But for me, they all carry the same tragic flaw; they just aren’t New York.

Now the bulk of this is going to sound cliché, sappy, and might resemble a 14 year old girl gushing with excitement about a new Justin Bieber album. So if that bothers you then there’s the door. If you haven’t been to New York, then now is the time to take a good hard look at your life, and reflect on the poor decisions you’ve made. So, here we go. 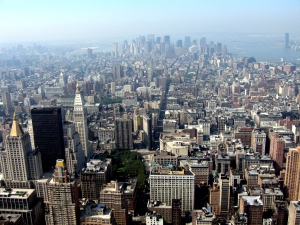 The place to be.

8 million people. Almost 400 years of history. The Statue of Liberty. The Empire State Building. Central Park. The Brooklyn Bridge. The Yankees. The Knicks. Sinatra. Jay-Z. Biggie. Letterman. Seinfeld. Mad Men. The list is endless, but who has that kind of time? If you haven’t been to New York, then you haven’t experienced a true urban environment. I know some people prefer to stay away from cities, in small towns and in the country, but those people are idiots. When you wake up in the morning, what do you want to see out your window? A house that looks exactly the same as yours, complete with the same stupid minivan in the driveway? Or the sun glistening off the spire of the Chrysler Building?

New York isn’t perfect, not even in my most vivid dreams, but neither is your girlfriend and you still love her. It’s the flaws that accent the city’s appeal. Yes, Lower Manhattan probably has the most poorly laid out set of streets this side of the Atlantic. Yes, a 400 square foot studio apartment rents for the same as an 800 square foot two bed or larger does anywhere else. Yes, a beer costs $12 at the average Manhattan bar, even though the nearest bodega will sell you a pack of 12 for the same price. So what? I love it all. I love the fact that you can’t understand anything the subway conductor says on the PA system. I love the fact that I spend more money there on things I wouldn’t buy anywhere else, even for a lower price. I love the fact that what is considered a decent salary anywhere else on the continent would make you feel like you live below the poverty line in NYC.

I’m by no means a rich man but nevertheless I feel I’ve carved out a halfway respectable existence. However when I look out my window and see anything but New York, I feel I have fucked up. Badly. We all get that post-vacation mini depression when we return from wherever it is we have gone, right? Multiply that by 100 for those first few days after a trip to NYC for me. And it gets longer and sadder every time I return. America is a deeply flawed, screwed up country that I both love and hate at the same time. On the one hand you have an incredible history, unlimited potential, beautiful landscapes and an awesome influence on the rest of the world. However you also have some of the worst cities in any developed nation in the world (I’m looking at you, Cleveland), a Grand Canyon sized gap between the rich and the poor, and the alarming fact that 1 in 3 Americans own a gun, yet only 13 million of them are registered hunters (but hey, land of the free and all that). I have no desire to live in America, but all that changes when we’re talking about New York.

New York never makes it near the top of the list of the best cities to live in. It’s always some fairytale town like Zurich or Auckland [Editor’s Note: or Bruges?]. CNN recently named Carmel, Indiana the best city in America to live in. Can you even read that with a straight face? The USA only has one city that matters, and I don’t think I have to say which one that is.

Never out of style.

The energy, the history, the cultures, the hustle and bustle, you can literally feel it under your feet (or maybe that’s the subway). The way it makes you feel as if you’re wasting your life living anywhere else. The cobble-stoned streets of downtown, the taxi and tourist filled canyons of midtown. The bridges. The tunnels. The contrast between fire escape-adorned former tenements of the Lower East Side and the century old sky scraping masterpieces of the Financial District. It’s where all your favourite movies and TV shows are set. It sits head and shoulders above every other inch of this continent. It is the capital of the world.

I love you Toronto, but you’ll always be number two.

One response to “A Final Love Letter to New York City”