Perfection is the ultimate goal of any professional athlete.  For pitchers, perfection is defined as not allowing any opposing batters to reach base.  No hits, no walks, no reaching via errors.  27 batters up, 27 batters out.  There are other versions of perfection in sports, such as a perfect shooting percentage in basketball, a quarterback’s perfect completion rate, or a shutout for a goalie in hockey or soccer (known as a clean sheet).  However, the perfect game in baseball has achieved a status level above all others.  Think about it, there are no movies about a basketball player shooting 100 percent from the field.  It seems to be an issue of frequency; shutouts happen all the time, while perfect shooting or quarterbacking is so rare as to make it almost impossible.  But the perfect game in baseball is just rare enough, yet within the realm of possibility, to have that special aura attached to it.

Meanwhile, umpires and referees get the calls right almost all the time.  As they should, the bastards! 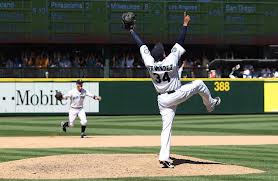 Felix Hernandez of the Seattle Mariners is the latest Major League pitcher to throw a perfect game, back on August 15, 2012.  He was given much fanfare and idolization by the sports media.  And rightfully so, as he has gone on to throw two consecutive shutouts.  You probably did not read in the headlines that many, if not all, Major League Umpires made all the right calls that same night.  Every close call at the base, every foul/fair ball, and MOST of the balls and strikes calls.

So why do we glorify the players who fail to reach perfection pretty much every game, while piling heaps of scorn and criticism on the officials who dare to challenge our perceptions of the rules of our favourite sports?  In my humble opinion, it is a combination of two major factors; a universal distrust of authority, and a desire to see the imperfect human reach perfection.

We will begin with factor one.  As a society, we dislike authority.  Starting with our parents keeping us from stuffing our faces with candy and that stuff under the fridge, we learn quickly that authority figures are put on Earth simply to stop us from doing what we want.  Teachers, religious leaders, university professors, bosses, and so on.  These people are stopping us from sleeping in and having fun, and generally giving us assignments and tasks to do instead.  Police officers, though respected, are also stopping us from taking that nice Porsche or that big-screen TV that we desperately want. But sport is supposed to be the escape from the mundane.  Living vicariously through the athletes of our favourite teams, we steal bases and basketballs, intercept passes meant for others, hit and punch anyone that stands in our way, and generally are allowed to let our most base desires escape from under the surface of propriety.  Until that whistle blows, and the fun stops, and some guy in stripes tells us, and everyone else in the building, what we did wrong.  How dare they! 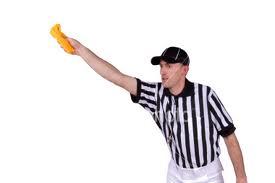 This brings us to factor two.  How satisfying it is when one of our heroes, our blue-collar, working stiff athletes (a paradigm confusing all on its own, but not one that will be analyzed here) is able to overcome not only the other team of blue-collar, working stiff athletes, but also those narcs in stripes, and reach the pinnacle of the sport.  No umpire was able to tell Felix Hernandez (or Philip Humber, or Matt Cain, or others) that he had done anything wrong. No umpire was able to steal an out from him with some B.S. call at home plate or first base.  Hernandez, despite having that crushing authority bearing down on him, broke through and reached that ultimate goal for any athlete: Perfection.

And imagine if an umpire had stood in the way of perfection! How would the world react? Well, you might recall that back in June 2010, MLB umpire Jim Joyce was working first base in a non-descript game between the Detroit Tigers and the Cleveland Indians.  Oh, except that Tigers’ starting pitcher Armando Galarraga pitched a really good game.  A one-hitter, in fact.  Oh, and that one hit? It came with two outs in the bottom of the ninth.  Oh, and the batter, Jason Donald, was actually out at first base, but Joyce called him safe, and in making the incorrect call, obliterated Galarraga’s perfect game and no-hitter bid in one shot. (See the play here) 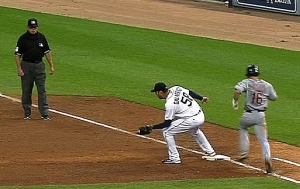 A media hurricane followed that game, which the Tigers went on to win anyway, and Joyce was roasted as an example of shoddy umpiring, with MLB stubbornly clinging to human umpires when laser-guided replay robots are readily available.  Pundits decried Joyce’s stubbornly sticking to his decision (although, I can’t really imagine anything more useless than an umpire who changes his mind whenever challenged) and his lack of appreciation for the circumstances (“Come on, ump, I’m working on a perfect game here, you can’t call that a home run!”)  Joyce cried, literally cried, after watching the call on TV afterwards, and issued one of the most heartfelt, honest, classy apologies you’re ever likely to hear from an umpire.  Galarraga accepted, moved on with his life, and the new media spin was that Galarraga was a hero, a cruel victim of shoddy umpiring, and that he embodied the sportsmanship so lacking in professional sports. Joyce, meanwhile, was Public Enemy Number One for about a week in early June 2010.  He fell so low that he considered quitting the profession and was rumoured to be suffering from depression for weeks after Galarraga’s near-perfect game.

Ted Williams is widely considered to be the greatest hitter of all time.  He is a hero not only for his accomplishments in the game of baseball, but also for his service to his country during World War Two.  I do not use him here to mock his legacy, but only to illustrate a point.  The greatest hitter of all time had a batting average of .344.  That means that out of 1000 attempts at bat, he successfully hit the ball and reached safely 344 times.  If my calculator is working correctly, that also means that he failed to reach base safely 656 times out of 1000.  If this were a math test, the greatest student in the class scored a 34 percent.  Now, of course I realize that hitting a baseball is far more difficult than judging whether that baseball was higher than the knees and lower than the belt, and flew across the width of a plate.  But THAT is difficult, in and of itself, especially when every decision is now held under the microscope of high-definition replays and the looming threat of Questec, the laser-guided strike zone system.  All I’m saying is, before you yell at the TV screen or toss a beer at the next umpire that makes a mistake, think of these men and women as the imperfect humans they are, athletes are, and we all are, and take a breath or two before reacting. 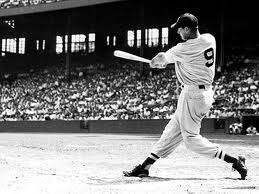 Ted Williams, Baseball’s Greatest Hitter. Oh, and he failed 65 percent of the time.

How many umpires have been in the news for anything other than bad calls on the field of play? OK, you’re probably thinking Tim Donaghy, and yes, he is the only one I can think of whose indiscretion was far greater than an error of judgment in the heat of the moment.  Meanwhile, headlines about pro athletes beating their wives, crashing their cars and getting into altercations on and off the field, are common fodder for newspaper writers.  And yes, perhaps that is part of the appeal.  They’re imperfect, like us, and capable of greatness, despite that imperfection.  But consider for a moment the strength of character required to make all the calls, and admit when you are wrong, as Joyce did.  Then consider the following anecdote.

On Wednesday, August 22, 2012, the character arc of Jim Joyce reached its unlikely conclusion.  Heading out of the dressing room to begin an Arizona Diamondbacks – Miami Marlins game, where Joyce was scheduled to umpire home plate, he noticed a woman in the stands having a seizure.  Joyce, calling upon skills that he learned way back in high school, administered CPR to the woman until paramedics arrived.  She has since been fitted with a pacemaker, and released from hospital.  Cue the headlines: Jim Joyce Saves Woman’s Life, and Goes On to Call Home Plate.  So, it took SAVING A LIFE for Joyce to once again reach the public eye, finally in a positive way, while succeeding on 34 percent of your career at bats makes you the greatest baseball hitter of all time.  Funny how these scales are weighted. 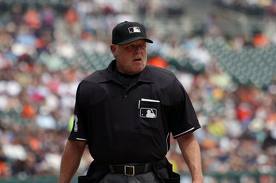 Jim Joyce: From Zero to Hero

Ultimately, Jim Joyce, just like all other umpires and referees, athletes, politicians and plumbers, is just your average, regular, every day person.  He is capable of foolish mistakes and grand heroics in equal measure, and those who focus on the former and ignore the latter, or vice versa, only serve to construct a half-portrait of the man, and humanity as a whole.