Hola, amigos!  Bienvenidos a la semana 3 del Live From the Couch.  Yes, this was Hispanic Heritage week at the NFL, so I’m just getting into the spirit of celebracion!  I ate a bowl of nachos with salsa and drank Corona all day.  Vamos!

If you ever need proof that a high-scoring team is not just a collection of superstars, but an actually well constructed, well-designed attacking unit, just watch what happens when they are missing their skill players.  This past Thursday night against the Carolina Panthers, the New York Giants were missing their starting running back (Ahmad Bradshaw) and wide receiver (Hakeem Nicks).  They managed to crush the Panthers 36-7, and in the process made back-ups Andre Brown and Ramses Barden look like stars.  Brown, a third-year backup running back, rushed for 113 yards, while Barden, a rookie wide receiver, caught nine passes for 138 yards.  Eli Manning and the Giants have a system, and they believe in it, even if it takes half a season (as it did last year) to get it running smoothly.  Meanwhile, Cam Newton is not Superman, despite his touchdown celebration.  The Panthers may have some issues brewing under the surface, with wide-out Steve Smith publicly calling out his second year quarterback for having a dejected look on his face for much of the second half.  The best quarterbacks try to be encouraging, even at the worst of times, and learn to fix what’s broken.  Cam Newton needs to be more Matthew Stafford and less Jay Cutler, in order to help his squad moving forward.  For the third week in a row, the Thursday night showcase game proved to be quite a bore, and is it weird to anyone else that the Giants have played in two Thursday night games, and it’s only week three.  NFL, how about giving us some diversity in your programming?  C’mon, man.

The early Sunday games were…hold on…whew, still trying to catch my breath.  I’m going to need a new remote after three games went into overtime.  Perhaps least surprisingly, but most disappointing to me, was the Jets-Dolphins battle.   These two teams always have great matchups, the greatest of all probably being this Monday Night game from 2000.  Much like in that game, the Dolphins had a lead, but let the Jets crawl back, mostly through a series of Mark Sanchez-to-Santonio Holmes passes.  Then, with the game in OT, Dolphins’ kicker Dan Carpenter hooked a kick left, and the Jets drove back to win with a field goal of their own.

Kansas City toppled New Orleans in overtime, and the Saints now sit at 0-3.  Does a coach really have that much value in today’s NFL?  For your answer, look no further than the Saints.  With Sean Payton suspended for the season over the infamous “Bounty-gate” scandal, this team is strugg-a-ling on both sides of the ball.  The offense is decent, but a shadow of its former self, and the defense continues to play with the organization of a vibrating football game.  Jamaal Charles scored on a 91- yard touchdown run, essentially untouched the whole way.  That’s not a good sign.  New Orleans is in big trouble, psychologically, and this season might get really ugly if they don’t manage a win for another 2 or 3 weeks. 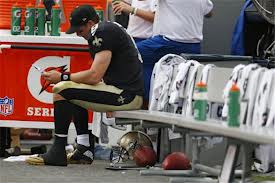 Drew Brees trying to figure out where it all went wrong

Last on the overtime breakdown, Jake (The Hurt) Locker and the Tennessee Titans made the Detroit Lions defense look very ordinary in their thriller.  And no, the absence of Matthew Stafford cannot be blamed.  In fact, the Lions looked more composed on offense under the leadership of Shaun Hill than it did under Stafford (until a poorly thought out 4th and 1 QB Sneak was stopped and the Lions surrendered the ball at Tennesee’s 7-yard line).  A couple of weeks ago, I joked about the Packers running backs getting out-rushed by Aaron Rodgers in their loss to the 49ers.  Chris Johnson, he of the 2000-yard season (in 2009), has continued an absolutely abysmal start to this campaign, as he was out-rushed by Locker.  Calling out your linemen probably won’t win you any favours, Chris.  Aren’t these some of the same guys that helped you reach that 2000-yard mark?  Offensive linemen are some of the hardest working men in football.  Don’t bite the hand that feeds.

In the late Sunday games, the Cardinals grounded the Eagles and the Falcons unplugged the Chargers (see what I did there?). Seriously, folks.  The Cardinals are now 3-0 for the first time since they were the St. Louis Cardinals (Yeah, the football and baseball teams of St. Louis were BOTH called the Cardinals from 1960 to 1988. ROUGHRIDERS!!)  While the Arizona Cardinals have been renowned for their passing attack for a few seasons, these Cardinals are making their stand on defense this season, forcing two fumbles from Michael Vick while sacking him five times.  I have been heralding the 49ers as the best team in the NFC, and will continue to do so despite an unimpressive loss to the Vikings, but the Cardinals are looking very impressive so far.

The Falcons are another 3-0 NFC team, and they looked sharp against the Chargers.  Their defense was aggressive, and Matt Ryan threw over and around the Chargers’ secondary with the greatest of ease.  On a positive note, Ryan Mathews returned for the Chargers after suffering a broken collarbone in the pre-season (been there, Ryan, I know the pain) and looked fresh.

Could this be the NFC Championship game come January?

Rounding up the late afternoon games and the 3-0 teams, Houston topped the Broncos with Matt Schaub outduelling Peyton Manning and the Broncos defense.  Schaub threw four touchdowns to Manning’s two, and the Texans defense left no daylight for Willis McGahee or the other Broncos backs to run through.  Houston has a great chance to repeat their success from last year, and given a healthy season from Matt Schaub (who lost a bit of his left ear on this hit) and Andre Johnson, can challenge the Patriots, Ravens and Steelers for the AFC crown.

Sunday night’s showcase game saw the Ravens meet the Patriots, in what promised to be an all out war.  The replacement referees did their best to ensure that it was a war, as they withheld their yellow flags for significant chunks of time and allowed some rough and dirty hits all night.  Joe Flacco outmatched Tom Brady, and Ray Rice outplayed most of the Patriots defense, but the story of the night must have been Torrey Smith catching two touchdowns less than 24 hours after the death of his younger brother.  There is an eerie correlation with family members’ deaths and excellent performances in the NFL, with a prime example being Brett Favre’s 2003 Monday Night game, just after the death of his father.  Favre passed for 399 yards and 4 touchdowns that night, and attended his father’s funeral the next day.  Perhaps sports can be affected from beyond the grave, as this episode of Seinfeld once suggested.

Monday Night Files: OK, I know I recently wrote an article about giving referees some respect regarding missed calls.  Nobody’s perfect, and usually their mistakes do not alter outcomes of games.  However, the NFL lockout of its referees continues to frustrate and enrage players, coaches and fans alike.  This game was no different, and the referees here not only altered the outcome, but may have shifted the trajectory of Green Bay’s season.  With the Seahawks down 12-7 on the last play of the game, Seahawks QB Russell Wilson heaved a hail mary pass towards a clump of Seahawks receivers and Packers defenders.  The ball came down into the hands of receiver Golden Tate, and the referees called touchdown! Or…wait, no, incomplete!  Wait…let’s lean on the crutch of the instant replay booth, you know, the best official in the league thus far.  Now, I can forgive a replacement referee for missing a hold or being unsure where to spot a ball.  That stuff takes years to master, as I’m sure any referee will tell you.  But on this play, Tate clearly shoved a defender away before catching the pass.  That is a clear case of pass interference, whether you’re a long standing official or a couch potato, and since it definitively altered the outcome of the game, it needs to be interpreted and called correctly.  Even more intriguing, the Packers are now 1-2, and face an early must-win game next week (luckily it’s against the Saints, so they should be fine).  But this referee situation is really getting out of hand, and the NFL needs to reach an agreement to bring the real zebras back, before an important, end of season game with playoff implications, turns into an all-out, Ron Burgundy style street brawl.

That really got out of hand fast.

Thanks for reading another week of my ramblings from the couch.  We’ll see you next Tuesday for week 4, when the NFL celebrates Polish heritage week. (Hey, Gronkowski, Janikowski, Gostkowski, Jaworski…it’s feasible)  I’ll be munching on perogies and downing tall cans of Zywiec.  Join me, won’t you?