A convincing piece ran in this space recently that did the unpopular. It defended Toronto Raptors president and general manager Bryan Colangelo, something that doesn’t happen much, except possibly by his wife and/or mother when they hear the locals chattering about their boy. I agree with many of the points made in the piece and I think it is extremely convincing. I came away from it thinking ‘hell, he hasn’t done such a bad job. Just some bad luck!’ I got off my high horse and I have to say, after a weeks consideration, I’ve come to a conclusion.

I like my high horse. It’s high, it’s a horse, it’s not a real horse, which is good, because I’m terrified of them. All of these are positive things. So I’ve decided to get back in the saddle and lay it out.

Colangelo prepares for another lambasting.

Professional sports are, and always will be, results oriented. During his tenure in Toronto, Colangelo is given some benefit of the doubt because of the Raptors division title in his first full season behind the helm, in 2006-07. I look at it more this way: that division champion team? They won 47 games. That is the second lowest win total for any division winner from 2006-2012 (The lowest being the Miami Heat in that same season, with 44). Hell, three division winners in last year’s lockout shortened 66 game season won more games than that. That team was a benefactor of playing in a horrendous division. The Nets were decent but struggling through injuries, the 76ers were coming to the end of the Allen Iverson era, the New York Knicks were mid-Isiah and Boston was pre-Garnett/Allen. The Raptors, while a nice story, were a ragtag group built around a franchise player in Chris Bosh, that wasn’t really a franchise player. Besides Bosh, they were made up of career European All-Stars in Jorge Garbajosa and Anthony Parker, serviceable players in Jose Calderon and Rasho Nesterovic, young ‘up and comers’ in TJ Ford and Andrea Bargnani and other bits and pieces from the NBA junk pile. I went back and looked at their roster and said to myself, “Really? That was a division champion?”

This leads us to Colangelo’s greatest strength as a general manager, which unfortunately, acts as a gateway to his greatest weakness. Bryan Colangelo, unequivocally, is the absolute master of the NBA scrap heap. He can find value where other people find nothing; he evaluates talent incredibly well. He also quite adept at moving contracts, creating value where there was seemingly none. The situation thrust upon him in Toronto was an ideal one for someone with these traits. Rob Babcock had damaged this franchise, giving away Vince Carter for virtually nothing, creating an unhappy locker room and a culture of losing. Colangelo came in and worked his managerial magic, finding players where nobody else thought of looking and hitting the jackpot on several of them. The problem is, Colangelo has fallen in love with this process, and when he falls in love with a player found during the process, he tends to massively overvalue and thus over-reward said players. 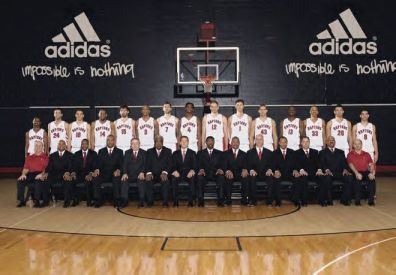 Just look at the evidence. Amir Johnson (5 years. 34 million), Jose Calderon (5 years, 45 million), Andrea Bargnani (5 years, 55 million), Linas Kleiza (4 years, 16 million), Landry Fields (3 year, 19 million). Each and every one of those contracts is defensible alone. Combined? They create a toilet clog of a salary cap. The Raptors are currently well under the cap, but that’s because they don’t currently employ a franchise player worthy of a max contract. The reasoning behind the contracts is even more fluid and makes them more head-scratching. Johnson was a super athletic, very young big man, cast-off by Detroit and dealt to Toronto from the Bucks. Textbook scrap-heap value. He’s now a rotation big man, coming off the bench and logging a decent amount of minutes for the team. The Raptors however, blew the doors off, signing him on the first day of his free agency when he was a restricted free agent, meaning they could have matched any offer given to him and thus retained him. Who else was paying Amir Johnson 34 million dollars? Maybe somebody… but more likely, nobody. We’ll never know. Calderon was signed to his deal with the expectation that he was an NBA starter and would be the starter for years to come. The Raptors have since spent each season signing or trading for his potential replacements, adding Jarrett Jack and now Kyle Lowry, relegating Calderon to the bench for much of his time. That, coupled with the fact that when he does play his individual defence and lateral quickness are so sub-par, means that the nicest thing that can be said about his contract is that it will make a nice trade chip for the team this season. Not a rave review.

And Bargnani? Yes, you need to sign the only number one pick in franchise history and yes, with the idea that he would turn into a star, locking him up long-term before that happened could wind up being remarkable foresight. But where are the results? He’s been in the league 8 years now, he still doesn’t rebound and he’s a streaky scorer at best. He’s seeming more and more like he is ideally suited to being a sixth man, a Tony Kukoc 2.0 for some playoff bound team. And that’s fine. But it’s not 55 million dollars fine. Kleiza and Fields are birds of the same feather; they’re nice role players, having either one of them is fine, but why the hell do you need both? And why spend a combined 33 million on them? Just because they’re both moveable contracts that other teams might want doesn’t make them good contracts. The number one goal of your contracts should be to make your team better, not to be moveable in the future. If you pay your scrap heap value finds a ton of money, they lose what value they had! You could be paying good players that money!

BC doing what he does best. Sort of.

So I think we’ve established that Colangelo overpays for middling talent[i]. However, the one reason that this sort of works for him is that he is so active on the trade front and so adept at finding other homes for all his abysmal contracts. It’s not a great talent, but it’s a talent. But where was it when it mattered most? During the summer of LeBron James’s infamous ‘Decision’, Chris Bosh did much the same thing. He held the Raptors hostage, refusing to comment on his free agency plans and immediately signing with the Heat come July 1st.

Enter Colangelo. The man renowned for his managerial expertise, the man who lives to make big moves… sat on his hands. He did nothing. Now I don’t know what conversations Bosh and Colangelo had. I know that Colangelo did everything he could to surround Bosh with talent. The Turkoglu contract was actually quite well done; it’s not BC’s fault that Hedo turned out to be rather loathsome. But, letting Bosh hold him in limbo like that? Not doing anything? This is the guy who does too much! This is the guy who makes too many trades, signs too many contracts, for too much money! Where was the action? It’s almost as if Colangelo said to himself ‘we’re giving him more years and more money… those are my moves! What else can I do? I’ve tried nothing and I’m all out of ideas!’ and he forgot his other move! If you’re going to have a tragic flaw, at least make it consistent. Bosh should have been traded, even if it was for pennies on the dollar, memories of Vince or not. Bosh was well within his rights to refuse to comment on his free agency; Colangelo would have been well within his to address the fans and media and say ‘look, we’ve tried to resign Chris, we can’t risk him leaving for nothing, we’re going to trade him’. There would have been griping, but it would have been accepted as the smart play.

The bottom line is that in his 7 years with the team, the Raptors haven’t gotten past the first round of the playoffs. They also haven’t bottomed out and gotten a top three draft pick. They’re cruising in limbo, and while I really like the additions of Jonas Valanciunas, Kyle Lowry and Terrence Ross, they seem like moves that will again bring the Raptors into that 40-45 win range. That is the absolute worst place to be in the NBA. You want to be gunning for the deep playoffs or you want to be rebuilding from the bottom up. Colangelo’s first year with the Raptors showed how fast a turnaround can happen, but even better models are the Oklahoma City Thunder, the San Antonio Spurs, the modern Chicago Bulls, the new look LA Clippers; there are numerous blueprints, both small market and big. Colangelo has missed his window to bottom out. That window was the past four years which yielded the 9th, 13th, 5th and 8th picks in the draft. DeMar DeRozan, Ed Davis, Valanciunas and Ross. All nice rotation players, some starters, in Valanciunas, a potential all-star. But nobody mind-blowing. Nobody franchise changing. Good value, the BC motto. Unless something changes, they should expect to be very rich men in the next few years. Kyle Lowry, too. And I’m sure all the contracts will be defensible. But at some point, when the losses keep piling up and that division crown is further and further in the rear view mirror, defensible isn’t going to be good enough.

[i] The original Steve Nash contract is perhaps the best example of this. He offered 6 years and 89 million to an offensively talented, 30 year old point guard with a history of back problems. That contract is so indefensible that Jackie Chiles would have said ‘next’. Just because it worked out doesn’t make it OK!

4 responses to “Stuck in the Middle: The Raptors and Bryan Colangelo”