There was a time there, I was probably around 13, when reading Star Wars novels seemed perfectly reasonable to me. You could (and still can!) jump into all sorts of post-Return of the Jedi books that tell tales of Rogue Squadron, Admiral Thrawn, and the New Jedi Order. Years later, while in the midst of reading an EU book called Dark Saber, I realized that these books were mostly just middling sci-fi, their main (and in most cases, only) appeal being the chance to see a continuation of the rich Star Wars universe; a place seemingly fully built but in certain ways (due to limits of time and technology), only briefly touched upon. I never read another Star Wars book again.

Thinking back on it now, I probably thought then, as I did until earlier this week, that there probably weren’t going to be any new Star Wars movies. For starters, there was no way they’d get Harrison Ford back into that vest (to say nothing of Carrie Fisher. Even at 13 I knew she was out on returning to Star Wars). Of course, around that time, the marketing ramp-up to the Phantom Menace was underway. I was excited, as only a 13 year-old boy could be, but I don’t have any absurd stories of waiting in lines overnight or anything like that. Yes, despite being a dedicated Star Wars fan, I watched Episode I a couple of weeks after it had come out, at my younger brother’s birthday (he was turning 10). I’ll be straight with you, I liked it. I liked Episode II even more, and by the time Episode III was ready for release (and the negative internet din was deafening), I still remember feeling like it was a fitting end to the trilogy (misbegotten as it may seem now). My point is: while my tastes have changed, and my desire for all things Skywalker-related may have abated, I have a little corner in my heart reserved for Star Wars. 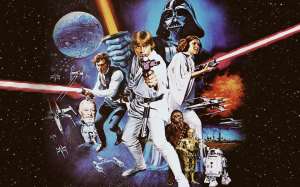 So, what do I have to say now? In a real hyperspace deal that seemed to come out of nowhere, Disney now owns Lucasfilm (along with Marvel Comics and the Muppets. I’m starting to think they’re just consolidated my entire childhood to make it easier to repackage). There is a new Star Wars film on the books for 2015. Episode Seven. Read those two words again. Does it even seem possible? 13 year-old me would have been doing back flips in excitement. 28 year-old me just wonders how it could be done. Allow me to don my sage-like Jedi robe and run through a couple of scenarios:

1) The Galaxy Extra Far Away – The option that makes the most sense on paper. Push the narrative out as far as it can go on the timeline (a la Knights of the Old Republic but in the future) and tell a new story with new-ish characters. Perhaps the focus could be on the grown children of Han and Leia as they navigate some nefarious Hutt plot or, gulp, Yuuzhan Vong incursion. Or, spin the story off into some distant corner of the future universe and start some familiar pastiche of droids and farm boy quests. To keep fanboys sated just fill the movie (and eventual trilogy) with enough callbacks to the original trilogy. This remains the safest choice and removes the enviable task of trying to find someone to play an aged Han Solo.

2) The Re-Casting of the Jedi – Poorly written novels aside, there is a ton of material in the Star Wars Expanded Universe. Theoretically, Episodes 7 to 9 could pick up shortly after the Return of the Jedi left off. Leia is in charge of building the New Republic with Han (and his pal Chewy) by her side, Luke goes off to rebuild the Jedi Order, and sure, Lando can be around too. Assuming the producers went this route and recast these iconic characters, I think it would behoove them to maybe glance through the most ready-made EU trilogy out there: Timothy Zahn’s Hand of Thrawn Trilogy. The books tell a breathtakingly epic story involving the rise of Admiral Thrawn and the New Empire, an insane Jedi (he’s a clone, but let’s forget that part) named Joruus C’Baoth (Star Wars names, amirite?), and the ever popular Mara Jade on a quest to kill Luke Skywalker [Update: apparently this whole idea is already out]. But then, that’s just one possible blueprint. With those characters you could craft all manor of space opera involving the right mix of space battles, romance and political intrigue (just, please, no more blockades). Would many consider it sacrilege to see someone besides Mark Hamill play Luke Skywalker? OK, most probably wouldn’t miss Hamill, but come on!

3) Mark Hamill is Still Available – This would be the crazy option, an insane mix of 1 and 2. What if the new Disney-Lucasfilm mega studio made huge offers to Ford, Hamill and Fisher and got them to reprise their roles? Not to borrow too much from the New Jedi Order books (because, yeesh), a small part of me would marvel at the sight of an aged Han, Luke and Leia as they try to shape the destiny of the galaxy. In that series of books, Luke is with Mara Jade, Han and Leia have a bunch of kids (who are, surprise surprise, very strong in the force), and spoiler alert, Chewbacca dies heroically on an imploding planet. What’s not to love (unless you’re Peter Mayhew)? Again, maybe we should just collectively ignore some of that EU stuff, but is there an angle there to tell a story of multiple generations living with the Force? As impossible as it sounds (seriously though, it’s impossible), I say yes. 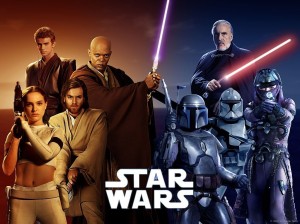 Bit of a buzz kill. Let’s move on.

Are there other options available to the new intrepid Star Wars creative team? Sure! We’re talking about a very rich sci-fi universe with a ton of room to play and invent. If you asked me with a blaster to my head, I’d say that option 2 (with a re-casting of the main characters) is the most likely. We’d get a new tale of intergalactic intrigue, populated with characters we are very familiar with. And remember, if Ewan McGregor can do a convincing Alec Guinness for three films, I’m sure we can find a new Han Solo, right? Let’s just stay positive. I even got through this whole piece without bashing George Lucas. Optimism abounds!