62-35 was the score.  No, I’m not talking about an early season out-of-conference, Alabama vs. Greendale Community College NCAA Football matchup.  But I might as well be.

That was the score (in favour of the NFC) in Sunday’s NFL Pro Bowl, the worst of the Big 4 professional all-star games by far, and league officials are considering getting rid of it entirely.  Not so fast, Goodell.

The Pro Bowl began in 1950 as the NFL’s answer to the already popular All-Star Games of the other big American sports.  In particular, the MLB All-Star Game was widely considered the best, and continues to be the most highly regarded All-Star Game by most observers (tie game notwithstanding).  More on that below.

When I was younger, the Pro Bowl was a big deal to me; the flashy, colourful uniforms, the razzle-dazzle plays, and the chance to see all of the best players in the league in one place.  Little did I care that the scores were ridiculously inflated, and the defenses were playing at a level somewhere between Middle School Varsity and NFL Europe.  I also did not care that players were likely to sustain injuries in a game that had absolutely no value, potentially costing them millions of dollars and their careers.  It was fun and flashy, and that’s all young Chris really cared about.  I also enjoyed Mutant League Football, which is closer to actual NFL gameplay than the Pro Bowl is.  (OK, I exaggerate, but only a little).

But now that I’m a lot older and a little bit wiser, I see the folly in an NFL All-Star Game.  While some critics have billed it as a glorified exhibition game, in my opinion that is an insult to exhibition games.  Before the season begins, all-stars are secure in their spots and have little to prove or play for.  However, a selection of exciting rookies, practice squad veterans and almost-starter backups play their hearts out for the chance at a starting spot.  Every current Pro Bowler was, at one time, an up and coming rookie who breathed some excitement into an exhibition game with an electric run, an incredible catch, or a devastating tackle.  Young Adrian Peterson, Ray Rice, and Aaron Rodgers all worked their way up by way of exhibition game reps.  By the time they have earned the reputation as Pro Bowlers, they have also earned the right to give their bodies as much time off as possible. 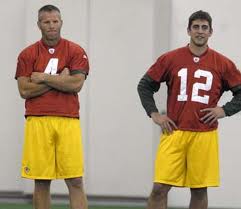 “Listen, Aaron, when ya send a reporter dick shots, make sure ya got yer Crocs on”

Since they don’t have that option unless seriously injured, Pro Bowlers do show up for what can be called the Golden Globes of the NFL season.  They party, they soak up the sun in Honolulu, they meet with friends, and in between all of that, they play a joke of a football game.  The Golden Globes at least has jokes.  Some rules that differ for the Pro Bowl; Offenses cannot send players in motion, or line up three receivers or more on one side.  In addition, offenses must have a tight end in all formations.  If restrictions on the offense are comical, restrictions on the defense are completely ridiculous; No blitzing, no press coverage, and no attempting to block field goals or punts.  Aggression is a huge part of the sport, but these rule changes effectively rob the Pro Bowl of all football related aggression. 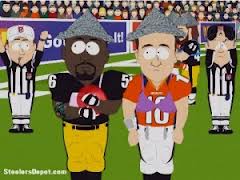 Goodell’s dream of a safe NFL – thank you South Park

So why are fans supposed to watch this mockery?  It would be one thing if only the defenses played casually – as they do in the NHL and NBA all-star games, both of which are hugely popular.  But to restrict offensive sets and playcalling options really takes the fun out of everything.  Imagine David Stern telling the NBA all-stars that pick-and-rolls were outlawed.  Even Gary Bettman would shudder at forbidding hockey all-stars from setting up tic-tac-toe passing plays.

The MLB all-star game remains the best, in my opinion, because the sport is played exactly as it would be in any other game.  Offenses and defenses are not limited by any rule changes or mentality shifts.  Yes, perhaps Pete Rose took it too far when he ran over Ray Fosse, but Rose is a bit of a dirtbag anyway.  The players take it seriously, and can expect to do so and still walk away healthy after nine innings.

In the 2012 Pro Bowl, you would have seen (had you watched) defensive linemen doing barrel rolls to switch sides, among other tomfoolery. (I finally managed to work tomfoolery into an article!) Commissioner Roger Goodell warned the players that the game would be scrapped if that kind of behavior continued.  This season’s Pro Bowl was a bit more serious, but it was also quite the blowout.  Did anyone on either side care?  Did the fans who bought tickets or watched on TV care? Doubt it.  Is there anyone left who actually cares about this game, with the Super Bowl still lingering on the horizon?

Probably not.  But I think I know how we can liven this thing up again.  Instead of an All-Star Game in the traditional sense, the NFL Pro Bowl should act as a showcase game for young NFL up and comers.  The NBA features a Rookies vs. Sophomores game during its all-star weekend festivities; there’s an idea that would work exponentially better for the NFL than the current setup.  Imagine a Rookies vs. Sophomores NFL Bowl, one that might have featured such rookies as Andrew Luck, Russell Wilson, Trent Richardson and Justin Blackmon suiting up against sophomores like Cam Newton, AJ Green, Julio Jones and JJ Watt.  These guys are all still young enough to want the extra exposure that the game might bring, while also less likely to risk serious injury than, say, Peyton Manning and Tom Brady.  They are also looking for big contracts, and will want to put in big performances in games that would showcase their skills to the whole continent.  And maybe instead of having it on the Sunday before the Super Bowl, it can take place on the same weekend, perhaps as a Saturday night showcase.  Super Bowl participants are excused anyway, so there would be no back-to-back games for anyone.

That might, just might, capture the attention of the football watching public, and even those who only watch the Super Bowl.  Perhaps the Rookie vs. Sophomore Pro Bowl can have the highest ratings of Hawaii-based programs.  Take that, Hawaii 5-0.