Since we’re in January, the time of the year where bad movies go to die, Daniel will be rolling out a series of retro reviews of some lesser known classic films. He wants to assure everyone that these films will probably be better than watching Movie 43.

There are not a lot of layers to Parker. I’m not talking about the latest Jason Statham movie, the recently released Parker, in which Statham does, I’ll assume, Statham things (which include grimacing and being aggressively bald). I’m going further back, talking about the character Parker, the literary force of nature and star of 24 novels, who has been cajoled and molded into various forms since 1962. Now, if you’ve read any of the Parker novels, written by Richard Stark (one of the many nom-de-plums of Donald E. Westlake), you’ll find a pretty consistent tone: Parker is a criminal, a master thief, he has no one he cares about, he works because it is what he does. The novels work precisely because they resist any deeper, more detailed analysis; there are no layers.

So then why does Parker keep popping up in various forms? There was the Mel Gibson version, the Robert Duvall version, even a beautiful Darwyn Cooke version (that one, up until this latest Statham film, was the only adaptation in which Parker got to actually be called Parker). In truth, the character is ripe for adaption directly because of its minimalism. With no heavy exposition to worry about, the storytelling possibilities can seem endless. But back in 1967, there was the original adaptation of Parker. It is called Point Blank, it was directed by John Boorman, and stars tough guy Lee Marvin.

Gun in the face. The Parker way.

Like its phonetically blunt title, the film gets to its point: A plan is proposed to Parker by an associate (he has no friends) named Mal Reese. He wants Parker’s help to steal some money. The film shows, in sharp overlapping scenes, the job and the aftermath. Reese double-crosses Parker, steals his woman Lynne, and leaves him for dead on vacant Alcatraz Island. But almost dead isn’t the same as dead, and just as the film’s present is informed by visions of its character’s past, Parker rises to seek vengeance and rewrite his future. The economy of the movie is thus thrust to the fore. Parker wants his money back, and as he says, unperturbed by the danger he has stirred around him,  “somebody’s got to pay”.

Having to craft the film from a slender novel, Boorman imbues the proceedings with a certain inevitable tension, mirrored by an opening scene of Parker marching down a hall, the sounds of his footfalls booming over the soundtrack. There is a growing unease here, as Parker moves higher and higher up the pyramid of this shady enemy organization. No stranger to films detailing the macho, Boorman effectively softens Parker enough to making his eventual harshness feel earned. Where Stark’s Parker seems to exist almost removed from time, torpedoing through various locales on his missions, Marvin’s Parker is allowed a life before he is cast into his hellbent quest. Parker is shown wooing Lynne in the past, scenes interjected into the action as if from a different movie used to fuel the forge of his anger. By the time Parker is bedding Lynne’s sister Chris (a flinty Angie Dickinson), he has steeled himself to his purpose.

Steeled is probably the word to use when describing Marvin. He is somewhat adrift when thinking back over the classic 60s tough guy actors. People tend to think of McQueen’s impenetrable cool, Bronson’s disquieting intensity or Eastwood’s everlasting grittiness; nowadays, even Robert Mitchum gets his due as a classic screen presence. But then, let’s remember Lee Marvin’s laconic malevolence. Dressed in a grey suit, complete with skinny black tie, he owns the frame. His performance is one where the other actors seem legitimately frightened as Marvin glowers into the scene. Even when Caroll O’Conner (cast as a money man, but basically playing it like Archie Bunker) shows up with some delightful stabs at humour, the screen is already filled. 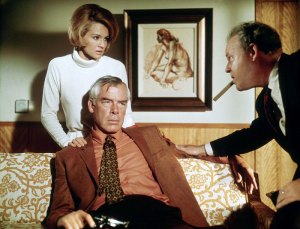 Perhaps the Parker of Point Blank does have layers. He expresses hurt, feels betrayed, appears to feel tenderness towards one, maybe two women. Parker, though, becomes more and more linear, even as the film becomes more and more regressive, overlapping scenes and past visions. Introducing reminders to Parker to remind him of Mal and Lynne’s transgressions, his past acts of violence, and his ultimate goal. Is it the money? Revenge as a plot is simple, it doesn’t have many subtleties, even if the target you’re after becomes increasingly diffuse, as it does in Point Blank. Of course, in the end Parker maybe gets what he wants, but he is back on that island, alone. He may have peeled off the many layers of his enemies, but he remains inscrutable to the core.