So did you hear, earlier this week, when Gabe Newell, CEO of Valve, and J.J. Abrams, director and producer extraordinaire, were giving the 2013 DICE Summit keynote speech that they both seemed amenable to the idea of working together on a Half-Life or Portal movie. Isn’t that just precious? Granted, since Half-Life is easily one of the greatest computer/video game series of all time and Portal is easily one of the best designed and most beloved games of recent memory, it all sounds like a perfectly natural idea.

Half-Life is a monument. Since its original release in 1998, it has stood not quite as a front runner or visual touchstone, a la Mario or Master Chief, of video games but rather, in a way, it has worked as the foundation, the infrastructure on which so much of modern video gaming has been built. 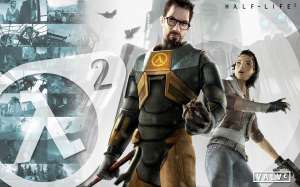 A brief history lesson by way of summary timeline:

It has been 15 years since Gordon Freeman – that ever silent, ever present protagonist – first put on his hazmat suit, picked up his crowbar and battled alien incursion. The games have taken us through the Black Mesa facility and the planet Xen, through the burned-out husk of City 17 and its terrifying environs, before leaving us adrift in some nameless northern country, a narrative thread left to dangle. Through it all, Valve has artfully fleshed out a brilliant science fiction universe that has elements of claustrophobic horror, lonesome road warrior aesthetic, and gripping full-scale urban warfare.

OK, but let’s slow down and apply some perspective here. Valve has not been idle. They’ve continued to roll out quality games, at their own pace mind you, including the surprising release of Team Fortress 2, and the wild, out-of-nowhere explosion that was Portal. Behind the scenes they’ve done extraordinary work to shape how video game content is distributed with their progressive Steam service, originally viewed as an oddity that now boasts a massive selection of game titles across the entire genre spectrum. Like Blizzard (another company known for taking it’s time and only releasing games they believe in), Valve maintains above all a level of quality that is largely second to none.

This, coupled with the latest off-the-cuff snippet of news about movies, makes the complete lack of a conclusion to the Half-Life story all the more dispiriting and frustrating.

Relax. This is not real.

To be clear, I’m fighting mightily against the urge to wallow in some real grade-A nerd rage here. Nevertheless, how much responsibility does Valve have here to finish their masterwork, the piece of art (yes, art) that set them up as titans of the industry in the first place? They created an indelible part of digital culture, crafted game play that was both viscerally satisfying and mentally stimulating. The trials of Gordon Freeman, his journey of escape, survival and insurrection, is one that needs finishing. What of the fates of Alyx, Kleiner, Dog and the rest? Will we ever find out who or what the G-Man is? Now, I suppose it is a compliment to Valve that people, myself included, can feel so wrapped up in the fates of fictional, digital, characters. Go ahead, google Half-Life 3 or HL2: Episode 3 and see the results you get. Behold the people pouring over every scrap of news, rumour or suggestion; the inspiration (to use the term loosely) for some mild protest. Is Valve beholden to its fans in this regard? To its characters?

It was revealed recently that JJ Abrams, after reinventing Star Trek, will be in charge of the latest Star Wars films. Response to this news has perhaps been mixed, but we are definitely getting those mythical Episodes 7, 8 and 9; the films that George Lucas always insisted he had story treatments for. In a way, Abrams is getting a chance to fulfill that dangling narrative (whether or not this is actually warranted is a different discussion). In fact, from the sounds of it, we’ll soon have more Star Wars related movies coming at us than we know what to do with. Yet, there was Abrams and Newell talking about working on films based on Valve properties. It almost felt mean, and it most definitely felt glib since the chances of possible Valve movies actually materializing is slim[1]. However, the connection to Abrams shows that Newell and his company have clearly grown beyond the boutique game developer they were in the late 90s. There is nothing we can do about that.

Locked away in the minds of Valve.

In thinking about the fates of those Half-Life characters, I couldn’t help but recall a scene in the famous Sandman comic series. Morpheus (the embodiment of Dream, just go with me on this one) is moving through his dream realm library. The shelves are stocked with mythical books that exist only in the minds of their creators, those works of art that were always hinted at but remain unfinished, lost to time. We sit and fantasize about what they could contain, what direction they may take their characters, our collective psyches enthralled with the narrative possibilities. We expect them to be great works of art – sometimes they are (After 22 years: mbv), sometimes they aren’t (After 14 years: Duke Nukem Forever). And sure, maybe some of us ask (or demand): why is this taking so long? Such as it is, right now, the continuation of the Half-Life mythos remains tantalizingly out of reach. It is a story of dream, dangling in the void.

I just hope it does not stay this way forever.

[1] If Halo, with its faceless hero, can’t translate to the screen even with the backing of Peter Jackson, it seems unlikely that a voiceless hero has much of a chance. JJ Abrams or no.

One response to “Half-Life 3, Star Wars and the Dangling Narrative”