It was a much less somber episode of Mad Men this week, far less concerned with death, and much more devoted to the carnal. It was also an episode featuring a classic multi-faceted Don performance. On the one hand, we see Don at home after Megan reveals that she had a miscarriage recently (her life sounds more and more like the soap opera she’s on). He appears as sturdy and understanding, ready for support and serious communication.  On the other hand, Don is getting far more brazen with his liaisons with Sylvia (which is also happening near is home). The old school flashbacks return to illustrate a young Don who is learning of the sex and “sin” happening behind every door. Hey, if you can keep it within yourself, not think about it, and maybe even throw a little money at it, the moral questions disappear. On the other hand, just when you think of Don as a terrible person (well, OK, I guess we were already thinking that), he steps into a meeting with Herb, the lecherous Jaguar salesman who was previously seen demanding an evening with Joan, and sarcastically shoots down all of the man’s small-minded “local” ideas. Don has a heart but it apparently only beats irregularly.

Meanwhile, Peggy is still trying to figure out how to get people to like her, forgetting the most important thing that Don ever taught her: the underlings don’t have to like you, they just have to get the work done. It should be said that a part of me prefers Don’s “get out of my face and get it done” management style to Teddy’s “I’m your best pal, forget that bearded weirdo you used to hang out with” performance. As we probably should have expected, Peggy is in a tough spot. Revealing her insider info from SCDP to Teddy has put her right in the middle of a classic social life vs. professional life conundrum.

Speaking of which, finally, Pete. Oh, Pete. While he has no view into Don’s personal life (not from lack of trying, mind you), he has always aspired to that sort of easy respect and power that Don commands. To that end, naturally, the idea of an endless conquest of women (despite being married to Trudy “Allison Brie!” Campbell) is very appealing to him. What he wants is confirmation, proof that he is the best, the man’s man. But, as in the case with super sycophant Bob Benson, the more you ask for respect, the less likely you are to get it. While Don works his silent killer magic in his upstairs/downstairs game, Pete fails at building even the sinful parts of his life correctly.

Two things to get to this week: first, Roger’s comment to Don and Pete that “It’s just like Munich”, after their meeting with Herb and the Jaguar people. It’s a great bit of character dialogue, planting Roger firmly in his own past personal experience (he fought in WWII and has let people know it). Still, it occurred to me that it’s an analogy that has fallen out of the lexicon as a way of invoking ‘appeasement’. Nowadays, you’re more likely to hear an appeasement comparison after somebody cracks a joke about NBC’s craven desire to do everything possible to keep Jay Leno happy.

(Did I just compare Leno to Nazi Germany? Yikes, yes I did. Sorry, Jay. Moving on.)

Second, and on a much lighter note: for whatever reason, back in 1968, baked beans were a thing. A guy from Heinz would go to New York City to sit in a fancy office to talk about baked beans. Here is how baked beans are doing, here is where we’d like to take baked beans. Now, I realize we hit the baked bean pinnacle back in Season 5, but seeing Raymond (the appropriately sadsack baked beans man) again, stuck on his island of vinegar and misery, really drove home the futility of it all. This man has spent nine years trying to drum up business for baked beans. Baked beans! Someone give him a vacation please.

No real fireworks from Ken this week but we did learn that, damn, he will do anything for ketchup. Do these guys ever sit back and think about how they must sound to other people? I mean, we’ve got four men in a room and one of them (Ken!) announces “we would do anything to make you happy”. He is talking about advertising ketchup! Such passion! Only once the ketchup man leaves the room does Ken let his true feelings known.

It’s ketchup: the Coca-Cola of condiments.

For years now (literally and televisionally speaking) Trudy has been, um, dealing with Pete Campbell. Oh sure, any marriage has it’s ups and downs, like the time Pete coerced that Polish nanny, or took a client to a whore house, or the time he got into a fight on the train about a woman who’s brain was shocked into forgetting about him. You know, usual stuff. But Trudy has stood by her man, seen in him a motivating ambition that will drive him (and by extension, her) up the social ladder. There they are in their well-appointed house, with their baby, living the life that is said to be ideal. That is until, of course, last night’s episode.

In a defiant blast, Trudy calmly sits at the kitchen table, after realizing Pete’s latest transgression will entirely disrupt the well-assembled life she has built, and lets him have it. She ends her rant with the astoundingly hard line: “And if you so much as open your fly to urinate, I will destroy you.” Yes, the actress who plans Annie on weekdays got to say that. I never knew she had it in her.

Honourable Mention: Joan to Herb: “I’m sure there’s a part of you, you haven’t seen in years.” Hats off this week to the ladies.

1 – Things go well: Don usually works some mystical ad-speak voodoo and the client is entranced. This has been happening far less often in the later seasons of the show.

2 – Things go poorly: This usually involves Don as well. He gets combative with the client. Or with Peggy. Or with Pete. Or with Ginsberg. This week he waged a brilliant self-destructive, passive-aggressive campaign on Herb (admittedly, a real lout) to make it clear that the idea of focusing on cheesy, local radio ads was a dumb idea.

3 – Things go shortly: Am I crazy or do half of the meetings that happen at SCDP fall in this category? Take this week’s episode: the men all walk into a room, sit down, pour drinks and then talk FOR TWO MINUTES before getting up, shaking hands and leaving. Doesn’t anybody ever complain about getting dragged all the way up there for a sip of a drink and a handshake? Advertising people, I don’t get it. 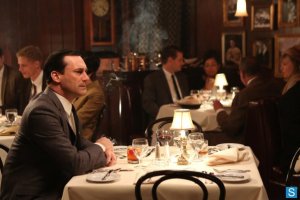 Stare hard, Don. We’re getting to the ‘On the Next Episode’ bit.

Many things have happened on Mad Men. There have been glorious ups, devastating downs. There have been births, deaths and suicides; people quit, got fired, hooked up, got married, broke up. Alliances have been formed and fallen apart. One time a guy had his foot cut off by a lawn mower and another guy got in trouble from his wife because he forgot to take the chewing gum off of his pubis.

So, we know what definitely will not happen next week. It’s a start.

One response to “Mad Men Monday Recap – The Collaborators”