It definitely felt like Robert Kennedy had everything under control. He was aiming to be the next President of the USA, riding in on a renewed wave of optimism. Then, in a chaotic scene, with mobs of people crashing around the nominee, shots were fired. In the ultimate tragic out-of-control situation, Kennedy was killed. This shocking moment was the last scene of Mad Men this week, and it drove home a clear point. Whether in a small plane, or pacing around an office, or stashed in a hotel room: we’d all like to feel like we have some degree of mastery over our lives.

But first, it is definitely chaos. The CGC people are invading the SCDP offices and everyone is on edge trying to figure out how they fit in. Pete, naturally, is worried about whether or not he’ll be able to keep his seat at the big boy table (literally and figuratively). He’s already lost control of his home life while his mother has clearly lost her grip on her mind and reality (though when Mrs. Campbell snaps alert at the offer of a G and T, my heart was warmed). Pete’s stature in the office is the sole thing that defines him these days. He’ll tell his mother to go to hell to keep his position (Happy Mother’s Day Mrs. Campbell!).

Despite the disorder of the office, Roger still gets some of the best lines (and the episode was directed by John Slattery). Setting the tone on the recent merger, Roger fires former head of accounts, Burt Peterson. You know, he kind of reminds me of that guy from Office Space who kept insisting he had people skills. There are redundancies now and while Pete (and the rest of the main cast) should relax, there is definitely an anxiety creeping around. Well, OK, it is probably all just being generated by Pete and Harry (complaining about his office again). Don appears to be completely unaffected, but then again, his whole life is defined by who he is controlling.

You see, for the women in Don’s life, when they need him he is enthralled but their independence is not something he likes to deal with. Too messy. We don’t see Megan much this episode, but it is clear that with her career developing, Don wants (but really needs) something new to possess. The ongoing tryst with Sylvia takes an unseemly turn this week as Don attempts to fit her into a neat hotel room shaped box. For all of Don’s attempts at cool, his final ‘please’ is sadly transparent. He needs.

On a happier note: Bob Benson, turning all of that irritating good cheer to good use. Finally, we have a reason for Bob besides being an ever present punching bag (though Peterson does tell him to kiss his own ass). Is Bob just sucking up to the right people finally? I mean, Joan does end up saving his job. Or, as Gail reminds, a nice gesture could just still be a nice gesture. Frankly, I’m overwhelmed by the whole thing. Is Bob about to sweep Joan off her feet? Are we prepared for that universe?

After some slow episodes, Mad Men is definitely picking up its pace. A narrative course that seemed much too smooth (or boring, depending on who you ask) has gotten a lot bumpier now this season. Everything feels like it could blow away at any time (well, except Bert Cooper. He’s a rock). But, maybe Teddy is right; the ride does get a lot smoother once you get above the darkness and confusion of the clouds. The plane levels off, you flip on your shades and soar above it all. Your problems are small and you can convince yourself that the mastery of them is easy, even as you sit in a tiny piece of metal amid a vast, unforgiving sky. RFK was on top of the world too, but no one is really in complete control, right?

So let’s see, we had Pete trying to figure out how to deal with his demented mother (there really is no nicer way to say that). This isn’t exactly locked into a specific time period. OK, how about Don and Sylvia meeting at a hotel for a midday tryst? Exciting, but dated? Hmmm, I feel like that still happens. Not a particular throwback there. The emergency room that Bob Benson takes Joan to is just as gross and poorly run then as they can be now. Nothing doing so far. Where are the ‘blowing smoke directly into a baby’s face’ or ‘shaking off picnic blanket garbage in a park’ moments from this episode?

Wait, I’ve got it! The drinking. We can always count on the drinking!

In a situation that seemed unfathomable as recently as two weeks ago, we now get to see Don and Teddy, two presumptive creative geniuses, work and drink together. What do we learn? Teddy can fly small aircraft, can put on shades in a crisis and run a tight meeting (or at least one that you shouldn’t be 40 minutes late for). However, Don can drink him under the table. Before we start trying to picture our bosses drunkenly stumbling through the halls, we’ll always have that image of Teddy sashaying into the creatives’ office, pleading the case for Bobby Kennedy, lambasting Nixon and collapsing in a heap. So basically, check-check-check, we could definitely only be in the 1960s. We did it.

Our boy Ken(!) Cosgrove didn’t make an appearance this week for the first time this season. Nevertheless, his presence was felt. There was a time when Burt Peterson (I know what you’re thinking: who?) was running accounts, but now Ken, while maybe not the man in charge, is the definitely the golden boy.

Chalk this up as another reason to like Ken. While we watch Pete scramble around the SCDP/CGC offices worried about losing his job, and see Harry being Harry (re: sitting around, burping), Ken is off in Detroit being taken on a tour of the Chevy factory. He is saying nice things to auto execs and probably calling his wife each night to tell her how it went. Ken is not worried about losing his job, even as Peterson (honestly, don’t even remember that guy) is getting canned (again!) and others are cut loose without a second thought (sorry Margie, we never knew you).

And I guess getting called a six foot version of Alan Ladd ain’t too bad either. And much like Ladd’s most famous character, Shane, I say to Ken: Come back! Come back!

Right from the start, Sylvia was in for a fight. While Dr. Rosen seems like a pretty adroit guy, he also comes off as someone very concerned with his career. He’s in command of his profession, and doesn’t like distractions (even if they involve his son and wife). Unfortunately for Sylvia, despite seeming to put Arnold in his place off-screen, she trades one type of control for another and says the magic word to Don: need. Oh no, you say that to Don, say that you neeeeed him and suddenly you’re waiting in a hotel room all day just for him to show up. As a result, throughout the episode we are treated to Don’s dirtbag macho Jedi mind tricks (which mostly amount to staring intently, carefully modulating your voice and being handsome).

But, swerve, Sylvia eventually shakes out of Don’s increasingly flailing grasp. In fact, Don’s grasp was so flailing that he had to almost plead with Sylvia to get back into bed. It was decidedly not a pretty situation. Though, I admit that it already feels like a tremendous relief to me. I don’t know how much more debasement of Lindsay Weir I could handle. Let her go raise her son and live with her family, Don. There are apparently plenty of women who will sit near you that you can tune out.

For their first big team-up, the SCDP/CGC crew work on… margarine. I haven’t been this unenthusiastic since the great baked beans fiasco of earlier this season. Still, we’ve got a job to do. What do we know about margarine? How do we sell it? Thank God for Peggy, or else we’d never have known that it was invented for the French armies of Napoleonic times. How’s that for a tagline? Margarine: It never spoils and you can eat like a Frenchman. In the military.

The important thing to note here is the different working tactics. Teddy definitely seems like the kind of guy that likes to have ‘rap sessions’ to talk about ideas. He doesn’t realize of course that this will unleash the Ginsberg and all his wild ideas. Smart move on Teddy’s part to quickly, quickly remind Ginsberg that there are in fact wrong answers. Still, the bullpen style of collaboration is in full effect, which always seems like it would be a fun way to work, even if the camaraderie is a little forced (and there is a lot of margarine covered toast).

Oh, and we also learned that being five to ten minutes late for a creative meeting is reasonable but 40 minutes is a bridge too far. Doesn’t Teddy realize that Don has got a serious psycho-sexual domination game going on right now? The nerve of that guy. 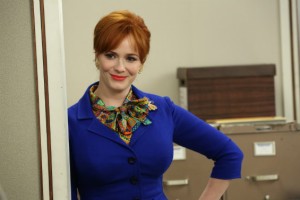 Joan is all smiles for… Bob Benson? Out of control, indeed.

An admission: I had to go out of my way to find the Next on Mad Men preview online and make the effort to watch it. What is happening over here with AMC? I feel like they are not taking these previews seriously and just relegating them to their backsite cesspool. Why does Weiner get to have his shows run straight into the second hour? Who’s hand is on the tiller over there? Nevermind.

All that effort and I really just want to talk about that dramatic zoom that starts off the promo. Don on the stairs, mid-step staring into the middle distance. So much to contemplate there. I think Jon Hamm’s chin may make the Symbolism Rankings next week.

One response to “Mad Men Monday Recap – Man With A Plan”