After a rush of weekend games and a pair of Game 7s on Monday, we’ve made it to the Second Round of the NHL Playoffs. Since I don’t want to dwell on the events of the first round (RIP Leafs), we’ll get right to the predictions for the next batch of showdowns.

The Chicago Blackhawks steamrolled through their first-round matchup with Minnesota (as predicted by everyone) and now get to play the surprising Detroit Red Wings. Corey Crawford was spectacular in the previous series, and the offense clicked immediately. Jonathan Toews has been disappointing offensively, but he also spent a large part of the series keeping Zach Parise’s line in check. Unsung hero: Bryan Bickell. Three goals on just 8 shots mean a shooting percentage of 37.5 percent. Chicago will undoubtedly face a tougher test from Detroit in round 2, Hossa and Kane and company will be locked down by tougher defensive matchups, and secondary scorers like Bickell will be key to keep the Hawks’ momentum going.

Chicago thanks its fans for watching them dismantle Minnesota.

Go figure on those Detroit Red Wings, huh? A really tough match against a very good Anaheim squad, and the only California team I picked to win their matchup has been eliminated. Detroit, meanwhile, advances to meet the Blackhawks. I figure their season has run its course. Jimmy Howard has been very average in net, with a 2.74 Goals Against Average and .911 save percentage, and that just won’t cut it against the Hawks offense. It barely cut it against the Ducks. Teams coming off 7-game series are usually worn down, injured, or downright exhausted, so while the Hawks must be feeling fresh after dispatching the Wild in just 5 games, the Red Wings face a quick turnaround to a Wednesday night meeting in Chicago. 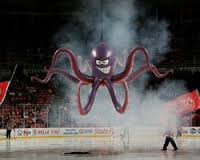 What is with California and hockey teams? This isn’t exactly a hockey hotbed, traditionally, but these teams keep finding ways to win, despite grueling flights across time zones and ice that must start to have a similar texture to a Dairy Queen Blizzard in May. The Los Angeles Kings sent the St. Louis Blues packing in 6 games, swinging the series with a game 5 road win.  The key player here has been the unheralded Mike Richards, who provided plenty of offense with 5 assists, but also managed a +2 for the series after finishing the regular season as a -8 player. Much was made of this series being exceedingly tough, even by playoff hockey standards. Remember, the Kings won the Cup last year, playing late into June. Hockey, of all sports, is the toughest to repeat as champions because of the demands of several 6-or-7 game series. The Kings will meet their California counterpart, the San Jose Sharks, for round 2, and this will be a grueling series.

Are the Sharks ready to jump over the Kings?

OK, OK, I completely missed the boat on the San Jose Sharks. I had the Canucks winning in six, based mainly on the Sharks’ struggles on the road and their aging core. But the Sharks surprised me, and many others, by winning the first two in Vancouver. By that point, given the Canucks fragile psyche, the series was as good as over. Perhaps I didn’t watch enough of the Sharks’ games during the regular season to see that Couture and Pavelski are already the stars to whom Thornton and Marleau are handing the keys to the franchise. They certainly played that way in round 1. Antti Niemi is playing like he did during the Blackhawks’ Stanley Cup run, and there is obviously a lot more life left in the Sharks’ tank (ha, get it?) than I thought a couple of weeks ago. The Sharks have had lots of time off after sweeping the Canucks, and await a matchup with Los Angeles.

First off, major credit to the Islanders for putting a minor scare into the Penguins in Round 1. Other teams might be thanking them for rattling Marc-Andre Fleury so severely that the Pens have turned to Tomas Vokoun for the last 2 games.  Having your starting goalie replaced in the playoffs can’t be good for your squad’s confidence. Vokoun is more than capable, sure, but he’s a backup for a reason. Will the Penguins return to Fleury for round 2 against the Senators, and which Fleury will we see? We know that the Senators have solid goaltending, so the Fleury question could be the one that decides the Penguins’ fate. We all know this team can score tons, but will they be able to solve Craig Anderson, and will their backend provide enough defensive cover for the offense to take control? 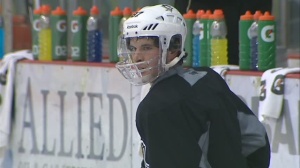 Shouldn’t Crosby be playing up this new Hannibal Lecter look?

The Ottawa Senators completely dismantled the Montreal Canadiens.  I had Ottawa winning in 7, but they were much more efficient than that, dispatching the Habs in only 5 short games. Craig Anderson was hot, like Wayne Gretzky 3D Hockey hot. Montreal’s “offense” struggled mightily against Anderson and his defense, and the frustration boiled over into an ugly game 4. This team is built around Anderson, but the offense comes from Erik Karlsson and, somehow, Daniel Alfredsson has not only been relevant, but effective. Ottawa now faces a Penguins team that is a far better team than Montreal. Anderson will need to stand on his head for the Senators to have a shot, and even that might not be enough. Good news for the Senators, though: the Islanders  made the Penguins work for this series win, so a little extra fatigue and wear and tear could be a factor. Maybe. But don’t count on it.

The Boston Bruins have to be exhausted. They were just pushed to the brink by the Leafs, and needed a miraculous third period to squeak by. I don’t anticipate the Rangers to be so generous with the puck in their own zone, nor will Henrik Lundqvist make the kind of rookie mistakes that James Reimer was making, like poor rebound control and shaky puck handling. The offense stalled for two and a half games, and Toronto wasn’t able to punish them, but the Rangers will.  Also, Boston’ defense is decimated by injuries at this point, with Dennis Seidenberg and Wade Redden both on the mend.  That may be enough of a weakness for the Rangers, led by Rick Nash, to exploit.  On offense, the Bruins can spread the puck around nicely, with three competent, and huge, lines of forwards.  David Krejci has heated up, but scoring can come from almost anyone on these Bruins.

Did you hear the one about Alex Ovechkin and his encounter with a bear? The bear thought he was dead so it left him alone.  Seriously, could there be a hockey captain who cared any less about hockey than this guy? Also, Henrik Lundqvist just played 120 minutes of shutout hockey in the playoffs.  Talk about heating up at the right time. These Rangers look dangerous now, and when it briefly looked like the Leafs would be meeting them in the second round last night, I was nervous.  Then it all turned sour and I was depressed.  Anyway, enough about me.  Remember when I said that Derek Stepan was key to that round 1 series?  Well, Ovechkin managed just 2 points in 7 games, and was extremely lazy on the back check, and that can be attributed to Stepan and friends shutting him down nightly. Can they do the same with Boston’s talented group of forwards?