One of the purest delights of a character like Wolverine is that he allows a writer to put him in whatever situation he wants. At a concentration camp? We can do that. Dust bowl survivor? He’s there. Post-Armageddon? Of course.  So to suggest a story that links back to Wolverine’s time as a Japanese prisoner of war during WWII – let’s not worry about how he got there – is no difficult thing. We can even place him at the site of the Nagasaki bombing. You know, for effect. Now, wait, Logan’s latest adventure, The Wolverine, capably helmed by James Mangold, is no bomb, punishing you for being in the wrong place at the wrong time. In fact, in thinking about it, I was struck by how much of it exists just because it can. Wolverine can heal any wound, presumably live forever, and yet The Wolverine is like one of Logan’s memories. It’s in there, it means something, but it is all too easy to forget. 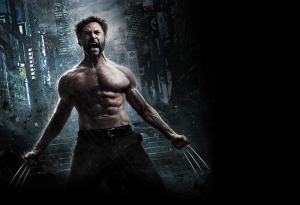 What do you say about the competent action movie? To begin with, it bears mentioning that the stakes are pretty low for a Wolverine movie. The last one, branded with the unfortunately long name of X-Men Origins: Wolverine (as if to imply there would be more Origins), was an unmitigated disaster. It further squandered the goodwill Gavin Hood had managed to engender with Tsotsi, it killed any potential for a Deadpool spin-off (and there was so much potential), and I have to believe that even poor Taylor Kitsch wishes he had maybe picked a different blockbuster to shoulder his way into. The bar for a standalone Wolverine movie was set pretty low, upright hair notwithstanding. Hugh Jackman enjoys the wig, apparently.

In a bold choice, our screenwriters (Mark Bomback and Scott Frank) elected to move the whole hair and claw show to Japan. Remember what I said about adaptable sets? Does Logan have a whole elaborate comic back story pertaining to his time spent in the shadows of the samurai? Of course he does. However, let’s get to the point: after a brief opening sequence that sees Logan, looking particularly haggard, getting into yet another bar fight and befriending yet another precocious youth (seriously, Jubilee? Rogue? and now, Yukio? Logan and young girls, everybody), we are brought up to speed with Wolverine in the modern day. Oh, and to make sure you know this is an X-Men movie, the film references heavily from the trauma Logan experienced after killing his beloved Jean Grey (a returning Famke Janssen) in X-Men 3: The Last Stand. And no I don’t care that I spoiled that movie, it stunk.

I say bold choice, because barring the presence of a few mutants and diligent comic book absurdity (the Silver Samurai is a thing), The Wolverine spends an inordinate amount of time trapped in the melodrama of the Yashida family. There’s the dying grandfather, seen first in flashback as a soldier saved by Logan; the conniving father, played by poor Hiroyuki Sanada (we need to have a talk with his North American agent), doing everything he can to sell the drama; and playboy Noburo (Brian Tee), you know he’s trouble because he’s a politician. There’s also confused ninja protector Harada (Will Yun Lee) running around on rooftops for various reasons; his motivations become so confused as to negate his purpose. Offsetting the warring testosterone is Mariko, the grand daughter of our dying benefactor, and potential love interest for Logan. I’m being cute here by throwing in the word ‘potential’. For a film like The Wolverine, it’s a spoiler to discuss whether Mariko will live or die, but it should come as no surprise that she provides a convenient, if ill-matched, love interest for Logan. We know from experience it won’t be the brash Yukio, and the vicious beauty Viper (Svetlana Khodchenkova) emits more bad Bond Girl vibes than she does toxins. 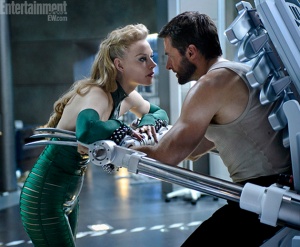 Viper stopping by to say what’s up.

So, anyway, forces move against the Yashida family, Wolverine, as is his wont, intervenes and finds himself dodging ninjas, chasing goons and saving lives. Mangold, as he did with the underrated 3:10 to Yuma , shows that he can ably frame action and chase sequences. There is some delightful hand-held camera work here, the expected bits of stab-stab violence, and even a convincing train battle (as witnessed in the trailer) that manages to not be completely ridiculous. I mean, it is ridiculous, but in such a physics-bending, purely comical way, so as to inspire a positive ‘whoa cool’ reaction. Let it not be said that Wolverine’s dispatching of numerous bad guys with a feral intensity (and a certain glee) is not entertaining to watch. He’s been a popular character for almost 40 years precisely because it never gets boring to watch a little man with sharp claws go ape.

And that brings us to Hugh Jackman, who at this point has proven that he’s about as invincible as good ol’Logan himself. We’re living in an age when every fictional character eventually gets remade, reimagined and recast so as to be repackaged for a new generation. Amazingly, Jackman, through thick and thin and a decade of movie making (and films like Van Helsing), apparently remains as the one man who can do the character justice. This is no small feat. Unlike Spider-Man’s easy teen angst, Superman’s all-American innocence, or Batman’s guilty vengeance, the Wolverine requires a dash of bad boy menace, a believable ability to engage in violence, some smoldering intensity and a dash of gruff charm. While The Wolverine eventually emerges from its syrupy second act and slashes towards its conclusion, there is Jackman’s Logan, slicing and dicing through bad guys, quipping with the best of them, and allowing us to feel comfortable with a movie that features a robot samurai with a flaming sword. With Jackman on board, I can forgive the overly convoluted plot.

I feel I should mention, as I wind down here, that there is, in the grand Marvel tradition (despite being a 20th Century Fox film), a post-credits sequence that is well-worth hanging around for. In fact, the theatre I saw The Wolverine in – a semi-packed late night Thursday show – greeted the final reveal with triumphant hoots and clapping. People love the X-Men and its continuity, they love that Wolverine (and apparently Jackman) will always be there to claw through it along with us. But I guess it’s saying something when the strongest reaction to your competently made blockbuster film comes with the marshaling of narrative forces for the next one. It’s Wolverine, again and again, invincible but for the malleability of setting.