My favourite football team is the Miami Dolphins. For the past decade, when I have mentioned that to friends and fellow NFL viewers, I was met with soft chuckling and sympathetic shoulder pats. But that was the end of it – the Dolphins weren’t terrible, they were just your standard, run-of-the-mill mediocre NFL team. Sure, they went 1-15 in 2007, but quickly bounced back to an 11-5 season and a division title in 2008.

Look at that colour scheme! How could you not like this team?

This season, they had a hot start and went 3-0, before going 1-5 in their last 6, to currently sit at 4-5. Meanwhile, their young quarterback Ryan Tannehill has shown flashes of competence, and second-year running back Lamar Miller seems to be growing into his own as an NFL pro. So, things aren’t too shab-

Whoa, elephant in the room. Some guys on the Dolphins apparently don’t get along. One player left the team voluntarily, and another guy has been suspended. So, that’s kind of alarming. And those gentle chuckles I was receiving? Yeah, now they’re looking more like this.

There are a few ways for me to look at this. First, I am a teacher, and I have certainly seen enough cases of bullying to know that it is harmful to both parties, and that, if left unchecked, it has the ability to spread and become pervasive and toxic. This might have been happening in the Dolphins’ locker room (the truth is probably far from fully revealed) and is likely happening in locker rooms all over the NFL.

Secondly, I am a sports fan, one raised on the notion that athletes are giants among men, capable of incredible feats of strength, stamina, and speed. They can’t be hurt, they can’t be stopped. Of course, I know better now, but a generation of kids watching this all unfold might be breathing a collective sigh of relief; if a football player can be bullied, maybe it’s not so weird. And maybe we can do something about it.

Thirdly, I am the most sarcastic, mean-spirited texter of anyone I know. When Richie Incognito described Jonathan Martin’s “I will kill your whole fucking family” text, I laughed, half embarrassedly, when I realized that I have sent that exact text, verbatim, to at least 4 of my closest friends in the past. I get the idea of “locker room talk” and I know that what we say to friends is quite different from what we might say to bosses, girlfriends, wives and family members. 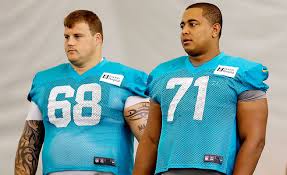 So what to make of this whole Martin-Incognito situation? First of all, it does appear that many talking-head types have made a much bigger deal of this than it really is. It appears that Martin and Incognito exchanged hundreds of texts over the past year, many of which featured language and contexts that, if said out loud, would make most people shudder. Also, Martin evidently texted Incognito a few days after the big blow up, following the Dolphins victory over the Cincinnati Bengals, expressing his joy for the win and saying; “Yeah I’m good man…I don’t blame you guys [Dolphins players] at all. It’s just the culture around football and the locker room got to me a little.” So while Incognito has been suspended by the team, it appears Martin, and many other Dolphins’ players, have no hard feelings and would welcome Incognito back to the team.

As for the man at the centre of the controversy, Incognito sure has a lot of negative history to support those wanting to suspend him, or worse. He was suspended from the University of Nebraska and the University of Oregon, and released from the St. Louis Rams, for various disciplinary and substance-abuse violations. He is, his history suggests, the prototypical jock bully from every “Revenge of the Nerds” movie.

Martin, on the other hand, is not your typical football player. His parents are both Harvard graduates, and he is a Stanford grad who studied Ancient History. Though he and Incognito played next to each other on the Dolphins’ offensive line, they could not be further apart on the spectrum of football player archetypes.

So I guess it makes sense that in the macho world of professional football, there might eventually be a misunderstanding between two such players. A crude joke here, an N-word there, a bizarre voicemail and all of a sudden, one guy is in therapy and another is suspended.

The fact is, some incredibly moronic things are said between guys when we think no one else will hear us. Maybe it’s sexist, or racist, or homophobic or otherwise, but a large proportion of guys do it, whether they admit it or not. It’s not an issue for just professional football players, or ‘blue collar’ guys, or big, strong, athletic white guys. It’s most of us. And it remains problematic.

Ultimately, I am still having a hard time sorting this out in my mind. I’m not sure who or what side I support (if forced to choose), but I know what I hate.

I hate that Incognito indiscriminately used the N-word in voicemails and texts to Martin, as if that’s an acceptable thing for anyone, especially a non-black person, to do. I hate all of the actual dirty, bullying type behaviour he has demonstrated in his past, like shoving and headbutting teammates, and kicking, punching and spitting on opponents in scrums during games.

But I also hate Martin for snitching him out so publicly, rather than finding some other way to address his problems with Incognito’s words and actions. I hate that Incognito comes off as some evil bully in most media reports, while many former and current players are supporting Incognito and labelling Martin as “soft”, as if those are the only two possible conclusions to reach.

I hate that bullying like this continues to exist in sports, and in the rest of the world. I hate that after all of this, I have barely heard a mention of the obvious need for league-wide psychological support for all players, since it seems like both Martin AND Incognito, among dozens of others, would have benefitted greatly from it.

But most of all, through one of the most bizarre and confusing episodes in recent NFL history, I hate that I still love the troubled Miami Dolphins.