Inspired by the recent Grey Cup Championship game, as well as renewed interest in moving the Buffalo Bills to Toronto (Jon Bon Jovi!), the CFL gained sentience and penned a heartfelt letter to its brother to the south, the NFL.

Did you watch it? Roughly one in seven Canadians did. Last Sunday’s Grey Cup drew an average of 4.5 million viewers, according to the Globe and Mail, which made it the most watched sports event of the year in Canada, and the fourth-most viewed Grey Cup game of all time.

I’m sure you didn’t. You were probably busy with your Sunday night Patriots-Broncos classic. I mean, heck, it was Week 12 for you and the championship game for me, and more people, even in CANADA!, were more interested in your game than mine. But it’s fine, whatever, I’m used to it.

Remember when we were kids, when I taught you all about football. I had learned it from my friend Rugby, but changed it to make it more accessible to North American fans. Forward passing, numbers and lines on the field, starting each play from scrimmage; I invented all of that. Then I showed it to you, my younger brother, and you were bigger, faster, and stronger than I was, and you changed some of the rules again. Made the field ten yards shorter. FOUR downs? What are we, babies? 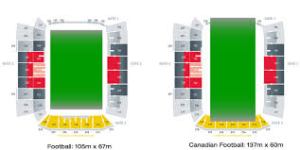 I’m the oldest professional league in North America, in any sport. You only formed in the 1960’s! Heck, I have player rivalries older than you! But do I get any appreciation for bringing the sport to North America? I don’t hear any.

I do hear the chuckles. The cracks about the big end zone. ‘Only 8 teams?’ And yeah, we used to have two teams called the Rough Riders. IT’S A GOOD NAME! And anyway, the Ottawa team didn’t stick around. Neither did the more recent Ottawa team. I have a difficult relationship with Ottawa.

But anyway, our rules are a little different, but that’s not a big problem. I just feel like you don’t remember all the good things I’ve done for you. Remember back in the 1990’s, when you were testing out cities for expansion and asked for my help? Remember the Las Vegas Posse? I do. I remember the Las Vegas Posse. I remember empty stadiums and rampant gambling. Remember the Memphis Mad Dogs and Birmingham Barracudas? ‘They love football in Alabama’, you said. Yeah, they loved football so much that as soon as the college football season started in September, our stadiums were deader than a failed rouge attempt (which would actually be a live ball, but you didn’t know that, so whatever).

In case you thought I was making this up. The Birmingham Barracudas, folks

On the other hand, remember when you wanted to give Baltimore another chance? We gave them the Stallions, and they were so good they almost won the Grey Cup. Imagine the embarrassment; the Grey Cup goes to America. Thank Gordie the B.C. Lions beat them in 1994. Based on their success, you allowed the Cleveland Browns to move to Baltimore and become the Ravens a few seasons later. You’re welcome!

Isn’t today Thanksgiving? Oh, you have three games that zillions of people are going to watch? Even though Aaron Rodgers isn’t playing, the Raiders are terrible, and the Ravens-Steelers is a certified snooze-fest after eating turkey and drinking bourbon for 8 hours.

How do you do it? Our Thanksgiving games are intense regional matchups, and happen at an important time of the season. Does anyone tailgate or watch TSN for 8 hours for our games? Of course not, they’re watching hockey! I tell you, that hockey really grinds my gears. It steals all my fans in the late season and playoffs, and it’s not even that great of a sport. You know what they do when two guys get in a fight in the NHL? They let them fight! Then send them into the penalty box for five minutes, then let them play again! For Gordie’s sakes, I know you don’t stand for that. You fine your players for wearing the wrong shoes, or the wrong colour shoelaces. I mean, I think you’re a bit too extreme, but at least your heart is in the right place, and you don’t let guys wail on each other. Well, that reminds me…

Are you recovered from that 700-million-dollar concussion lawsuit? I’ve been making some steady, not exceptional, money the last few years, and could lend you a hand. I know you’ll pay me back, just like I paid you back that 3 million dollar loan back in the 1990’s.

Who am I kidding? Of course you’re recovered. You probably made that much money on a Wednesday morning in April, just based on jersey sales. I don’t want to sound bitter and jealous…

I know I’ve diverged all over the place, but the reason I’m writing this letter is to ask you directly about something I saw on TV in my Grey Cup hangover. It could have been a dream, because it seems ridiculous, but I thought I heard that Jon Bon Jovi was going to bring one of your teams to one of my cities. I’m going to have to ask you to exercise some executive discipline, and do whatever you can to keep that pretty-boy New Jersey-ite out of my country. I mean, he can come for concerts and stuff. Just not to bring the Buffalo Bills to Toronto. That shit’s not cool.

We have a good relationship, you and I. We help each other out. Remember when I gave you Doug Flutie and Jeff Garcia? How about Raghib ‘The Rocket’ Ismail? He had some good years with the Cowboys. 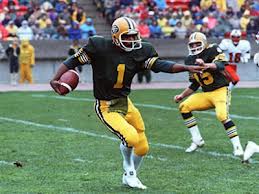 Warren Moon on the Eskimos in the late 1970s

Even forgetting all of that, remember back in the 80’s when all of your quarterbacks were white country boys, and your reputation was taking a hit. What did I do? I introduced you to Warren Moon, Edmonton Eskimos legend, and you stole him and made him the face of the new, modern, multiracial NFL. I know the “black quarterback” issue isn’t as big as it used to be, but we’ve never been shy about giving a fair chance to a good quarterback, regardless of colour. Right now, out of my 8 teams, 5 have black starting quarterbacks. Out of your 32 teams, you have 7. Not cool, little bro. Not cool. Maybe I shouldn’t mention it, or you’ll snap up Darien Durant or Troy Smith just to save face. And no, I don’t want Tim Tebow, thanks anyway.

So please, whatever you do, don’t let Bon Jovi bring those Bills to Toronto. They’ll kill the Argonauts, and a league can’t function without a team in its biggest city. Where would I move the Argos? Ottawa? I know it sounds crazy, but I gave them another chance. The RedBlacks! I know, I know, I should just leave him and change my number, but sometimes he’s so sweet and nice, it seems like he really cares about participating in my league. Quebec City? Have you ever been there in November? Bundle up, son. The East Coast? I won’t even…

Just don’t do it. If you want the Bills to move, send them to Los Angeles or Portland or Austin or Sacramento. Anywhere but here. I’ll just die, and even though you don’t need me anymore, at least respect all I have done for our sport. Please.

Your older brother, the CFL.