There’s this great visual metaphor in the new film Dallas Buyers Club involving a painting of some wild desert flowers, holes hammered roughly into drywall, and the resulting crooked hanging of a picture. It’s a perfectly sad, elegantly expressed bit of emotion that encapsulates not only the story’s two most dynamic characters, Ron Woodroof and Rayon (Matthew McConaughey and Jared Leto, respectively), but also the film itself. Dallas Buyers Club is a piece of handsomely staged art that covers over some immensely ugly reality. I enjoyed the film, but then I wondered what our fascination is with these types of Road to Damascus movies. For a film that attempts to portray the AIDS crisis of the late 80s and early 90s, a period of time when gay people were perceived to be the exclusive carriers of a new plague, doesn’t it feel odd that Dallas Buyers Club voices its story through a fast-talking, dick-swinging, rodeo-riding Texan? 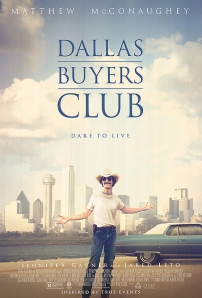 There was a time, not that long ago in the historical sense of things but fairly long ago in the cinematic sense, when films were exclusively made by, funded by and led by white males. And they were all straight, at least in the Rock Hudson way of things. Admittedly, this particularly trope has not changed all that much. But as you probably guessed, it has led to a controlled sense of which stories would work in the mainstream, which stories were to be ignored, and which stories were to be terribly portrayed.

It’s why it was a big deal when Sidney Poitier finally won an Oscar (even if it was for the wrong movie). Or why Tom Hanks in Philadelphia felt significant (even if it focused largely on the guy without AIDS). It’s why some of us make a big deal about Kathryn Bigelow or Bridesmaids. Of course, it’s also how we end up with a movie called The Last Samurai, in which Tom Cruise of all people, plays the titular hero. To be clear, I’m not conflating the idea here of being black or a woman or Asian or gay, I’m not trying to link or compare these different groups. I am asking, however, about this explicit ‘otherness’ – as in, differing from the straight white male experience – that is often portrayed in films yet very rarely allowed to stand on its own. It’s Matt Damon saving a downtrodden earth filled almost entirely with Latino people.

To be fair, Dallas Buyers Club is a really good movie. The story of its hero, Woodroof, is complicated and fascinating and hard to watch and transformative in all the right ways. McConaughey’s performance, and insane weight-loss (which has to be mentioned), is one steeped in his typical charms and bravado, but also one that gradually elicits a pathos and empathy. Woodroof is not a particularly good guy (what with him being a racist homophobe and all) until he is staring death in the face and, well, you guessed it: he changes. As a character arc and narrative, a screenwriter could hardly trace it out better. Yet even with a story worthy of ol’Paul, it took 20 years for the film’s original screenwriter, Craig Borten, to finally see Woodroof’s life make it to the screen. From that perspective, how difficult would it be to sell a mainstream movie about gay people or the AIDS crisis without an obvious cowboy white male at its centre? It’s Emma Stone helping all those black maids to retain their dignity.

In 2013 it is not all doom and gloom. Almost 75 years to the day when Hattie McDaniel became the first black Oscar winner after claiming a Best Supporting Actress award for Gone with the Wind (she played a maid, shockingly), the film still being talked about as an awards favourite, 12 Years a Slave, finds itself in a unique position. In many ways, it is the first of its kind; a serious story of slaves and bondage, of clearly defined ‘otherness’, that is not forced through the lens of white experience – not given some high-minded Amistad (starring McConaughey!) treatment. That the movie is also directed and written by black men feels significant.

I’ve written about 12 Years a Slave before. Like Dallas Buyers Club, it is a story of corrupt institutions, a certain unspeakable fury and an ugly rising tide of horror. Both films show people abandoned and abused; they are heartbreaking movies precisely because we must acknowledge that they happened. For 12 Years a Slave and its director Steve McQueen, however, no attempt is made to facilitate the usual mainstream perspective. His film refuses to release its grasp on that painful pulse, the one that shows all of the indignity and madness inflicted upon the poor souls bound by its chains. To cover it up with the usual artful presentation seems besides the point. It’s Mookie defiantly throwing the garbage can through the plate glass window.