When I turned 6, my uncle gave me a subscription to Highlights for my birthday. The first issue arrived a few weeks later, appearing on our doorstep on the same day that my grandfather died. His death was, of course, unrelated to Highlights or any of the other mail that was received that day, but the timing secured the magazine’s significance in my memory. 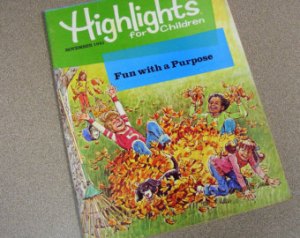 About two years ago, I moved into a new apartment. The previous tenant was a local artist who’d migrated to up-and-coming pastures, as local artists do. He left a big empty steamer trunk in the middle of the living room and forgot to update the mailing address for his subscription to The New Yorker.

For seven glorious weeks, his absent-minded loss was my gain. I’d long coveted my own subscription to the magazine, and whatever guilty feelings I had about taking someone else’s copies ultimately didn’t stop me from doing exactly that. Imagine the episode of Friends where that old neighbour lady’s cheesecake is repeatedly delivered to the wrong apartment and Rachel and Chandler shame-eat it together, but replace creamy dessert with longform journalism and witty cartoons.

Eventually, that well ran dry and my predecessor fixed his oversight but this brief stint as the Talented Mr. Ripley of magazine subscriptions was the catalyst for a renewed love affair with the medium of print.

I realized that I like to get physical with reading. Blemishes like heartily crumpled pages, notes scrawled in the margins and and a well-fractured spine signal that a book is loved and appreciated by its reader. (Approaching it like a contact sport may also explain why I find book jackets so cumbersome – they just get in the way. Like a condom without the obvious benefits.)

I wondered if this was the beginning of a slow transition towards “back in my day”-esque thinking but I’m not technophobic. The advantages of digital reading are too numerous and obvious to realistically consider opting out. Consumption of web content doesn’t need to be reconciled with a taste for print. They are forces that can fruitfully coexist alongside one another, with each form complementing the strengths of the other.

People love to reference our diminishing attention spans, hence the rationalization for serving web content in snack-sized portions. But the difference between what each of these mediums offer isn’t so much about committing to the length of material, or how meaningful its subject matter is. Some of the most overwhelming things I’ve ever read have been online. I’m not saying I’m against web content – these platforms scratch different itches. McLuhan’s old chestnut holds up – the medium is still the message. But aside from sheer tangibility, what does print offer that digital cannot?

The web can be a series of self-interruptions. With extra time for consideration and editing, print platforms can produce more introspective writing, and in turn, this allows for the quiet immersion that makes for a more thoughtful reader. The pressure to publish digital output in a timely manner values haste over precision and the results can be typically more reactive than reflective. Do I feel like conversing at a noisy party or chatting one-on-one ? As I get older, I’m not so much into loud, crazy shindigs. A taste for quieter forms of media probably echoes that. Print gives me a break from that chaotic atmosphere and helps to build stillness into my daily reading.

There have been a couple of standouts among the print content that I’ve discovered that are exclusively available in print form. Little Brother is a Toronto magazine that is published twice a year. It first caught my attention this past summer when I found their Rob Ford fan fiction ‘zine at Type Books. The anthology took on Toronto’s complex feelings about the never-ending “stranger than fiction” saga that is our mayor. Interested in seeing more from the magazine, I checked out the launch of Little Brother’s third issue and listened to readings from its contributors. The issue’s theme is “Pop” and the readings covered this subject from a variety of angles, with highlights such as tweets written by professional wrestlers (amazing), a vintage liquor ad from an issue of Playboy, and the original Dungeons and Dragons player’s manual.

Just like television didn’t obliterate radio, print is being pushed into more specific places of consumption. It’s nice to see that people are still producing good work in print-only arenas, for the times when one might need a break from the persistent disruption of a digital space.