How did we end up here? In a year when I was let down by almost every big summer blockbuster movie, when my mid-year film wrap-up had more equivocating modifiers than a Rob Ford apology, when The Monuments Men – the movie I was probably looking forward to the most – got pushed to 2014 (to February no less; such indignity), I end up making a list of worthwhile films that runs almost 20 deep. In that spirit, 2013 became a year of films that should be honorably mentioned. Cheers then:

To American Hustle for its surplus vim and vigour and endlessly appealing 70s style (yes, even all of those complicated hair-dos).

To The Kings of Summer for introducing me to the bizarre character of Biaggio and getting the feeling of a boy’s first heartbreak just right.

To Dallas Buyers Club for daring to artfully tell a sometimes ugly story about AIDS, even if its strongest voice didn’t come from its saddest victims.

To Short Term 12 for teaching us that unseen wounds can take the longest to heal but that the greatest inner resolve can sometimes be found in the smallest of packages.

To Before Midnight for capturing the most perfectly realized mature and complex relationship on film in the past decade (or two).

To Frances Ha for steering its director back towards the (black and white) light and for making us all fall in love with the idea of a quarter-life crisis.

A wild man we’re not sure we trust.

Blessed with a deep appreciation for its setting, its people and its obvious Twain-esque influences, Mud is something of a throwback southern epic. How else can you quantify a film that measures itself by the slow and steady flow of the Mississippi River? By its depth. Mud moseys along to tell the story of two boys’ coming of age, the doomed and tragic tale of two lovers and a loss of the old ways of family living along the river. It’s a bittersweet film, aided by Jeff Nichols patient direction, and driven by Matthew McConaughey’s perfectly self-assured performance. We know that his Mud is maybe not entirely who he says, but we want to believe in him just the same.

I can’t decide which is more disappointing: that more people didn’t see this film – the debut from uber-talented writer/director/star Lake Bell – or that I almost forgot that I had seen it. I realize this does not sound like a ringing endorsement. But then it all came flooding back: the disarmingly cute interplay between Bell and Demetri Martin, the casual louche brilliance of Ken Marino and Fred Melamed, the emotive work from Michaela Watkins and Rob Corddry (!). And let’s not (heaven forbid) forget the plot: a deceptively simple story (woman desires work as trailer voice-over actor) that is laced with weighty relationship introspection that doubles (triples?) as an incisive criticism of a culture that would prefer its women to stay young and dumb.

And now the total inverse: a sports bro drama! Let’s be honest, the degree of difficulty on making a film like this in 2013 is much higher than we’d like to acknowledge. Telling the story of Niki Lauda and James Hunt, two superstar F1 racers from the 70s, should have been coldly impersonal or distractedly explosive (it is set in the the car racing world, after all). Somehow, Ron Howard – of all people – manages to balance the film on a fulcrum of muscular race scenes, deftly drawn characters (Daniel Bruhl making the prickly Lauda strangely likeable should win him something) and a stirring narrative climax. I enjoyed this movie far more than I thought I would.

I told myself I should probably watch Steve McQueen’s 12 Years a Slave again. One viewing is probably not enough to absorb the quiet agony of what is on display. Quite simply, the film is a testament to be endured, akin as it is to a sort of psychic flaying. The story of Solomon Northup, stoically played by Chiwetel Ejiofor, is one of systemic madness and orderly oppression. It offers no delicious revenge or justice; in fact, even its conclusion provides only the smallest peace. We are asked again and again to simply regard the effects of slavery. 12 Years a Slave  is like a chain around the ankle: heavy, ugly, and utterly inescapable. I will probably never watch it again.

Throughout Her, Spike Jonze’s sensitive ode to the tribulations of modern love and technology, I kept trying to figure out how it had been filmed. The interiors were easy enough, all well-designed apartments and offices; Apple crossed with Ikea. But then there were these huge skyscrapers and elevated trains and I knew it couldn’t entirely be Los Angeles. It wasn’t. Jonze had filmed his “Boy meets OS” love story in Shanghai to better simulate the huge urban future he had envisioned. This is the level Jonze is working on, the level he brings Joaquin Phoenix (in another staggering performance) to, and the graceful understanding he brings to where our lives may be heading.

An ordinary man we hope will survive.

Sometimes you see an actor, maybe a superstar celebrity, in a scene that totally dismantles your sense of that actor, the movie, and even yourself. For two plus hours Captain Phillips is a taut, politically-minded, action thriller. It involves Somali pirates, international shipping concerns, and the U.S. Navy. It also stars Tom Hanks. We know how it will end but, with Paul Greengrass behind the camera, the tension mounts anyway. All of this is washed away, however, in the last two minutes when Hanks as Phillips is finally rescued. At that moment, somehow, you are watching something different: a man coming to terms with the ordeal he has endured. It’s a special moment in an uncommonly powerful film.

Yeah, all those special small moments in film are great; the little gestures, the heart-rending moments, the grace notes. They can mean a lot. Sometimes, though, sometimes you need film to just completely annihilate your perceptions and blow apart what you believed was actually possible. Gravity is one such film. Director Alfonso Cuaron went away for seven years and upon his return he was ready to take us to outer space and melt our minds. Too much hyperbole? Maybe the narrative is thinner than the film’s atmosphere, and perhaps George Clooney gets too cute (I ignore the people who think this), but who among us were not totally enraptured as Sandra Bullock’s Ryan Stone leapfrogged and ping ponged her way back to earth; her cosmic will to survive as thrilling as literally anything we’ve ever seen. A giant leap for mankind, indeed.

I suspect we may look back at Inside Llewyn Davis as one of the best films the Coen brothers ever made. I know, we said that after No Country for Old Men, and Fargo, and probably after Miller’s Crossing too. Yet, here we are again. Armed with a pitch perfect performance from Oscar Isaac as the thoroughly likeable asshole title character, colourful supporting roles for everyone from stalwart John Goodman to fresh-faced Justin Timberlake, Inside Llewyn Davis is a window into a specific time and place that offers a penetrating look into the confusing realms of talent, passion, human connection and luck. If Davis’ spirit animal is his upper west side benefactors’ wandering marmalade cat then I suspect this film may become something of a spirit animal to many (including me).

Nebraska is a delightful and moving film largely because of what veteran director Alexander Payne decides to keep in and out. The story is one of father and son, but don’t let its starkness fool you. There is a deep reservoir of history and emotion here. Woody Grant (Bruce Dern) wants to believe he’s won a million dollars. His son David (Will Forte) wants to spend time with his dad – and settle the prize winning debate once and for all. Outside of June Squibb’s inspired performance as the Grant matriarch – who’s decided she’s too old to care what people think of her anymore – everyone in this film appears to be complicated in their reservations or simple in their openness. Payne provides comedic skits filled with folksy wisdom and goofy asides, but he never looks down at his characters. And Dern, a rangy dynamo out of the past, steers the film along, somehow both vacant and totally aware. Nebraska is shot in black-and-white, but you cheer for Woody to have his final days in living colour. 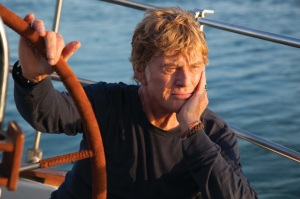 I think it’s time I admit to enjoying films with inscrutable but compelling male leads. Reread this list as proof. This year no film was anchored by a more inscrutable and compelling man than Robert Redford as Our Man in J.C. Chandor’s All Is Lost. He was the sum of all the men. The film, entirely owned by Redford, is like a tonic, a refreshingly clear vision that subverts the usual bombast – ocean storms excepted – by reducing its own story to the most elemental of components. A boat, a man, the ocean; vistas and an elegiacal score. Almost no dialogue. It is something I have never quite seen before.

For 106 minutes, we are absorbed into the living document of a man’s step-by-step survival, his assertion of existence, his will to live. No wars are waged, no planets held in peril. There is no series of flashbacks, no grand overt spiritual adventure. We are given only the absolute thinnest of narrative contexts. All is Lost lives up to its title. But in the film’s breathtaking solitude, we the audience can find everything.