For the first five years the Toronto Raptors were just that strange team in Canada; the one with Mighty Mouse, the one with Isaiah Thomas running the show, the 16-66 one. If people did talk about the Raptors it was to discuss the terrible jerseys, the aging players on the decline, the absurd characters and, naturally, the perplexing management decisions. This is expansion basketball in the mid-90s. The team was a footnote, invisible to the wider league. 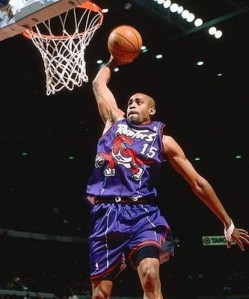 In the presence of greatness.

That lockout shortened 1998-99 season was the beginning of optimism for professional basketball in Toronto. The team almost made the playoffs, Vince Carter won the Rookie of the Year, and hope was soaring high. The trend continued. The team made the playoffs, imploded against a tough Knicks team, learned lessons, reformed, pushed again into the playoffs and seemed poised to be a long time contender in the Eastern Conference.

We, the fans, didn’t know we’d already seen the apex of the franchise. (So far! I have much hope for the current Lowry-DeRozan-Valancuinas-Ross-Johnson group.) We don’t need to rehash the Vince Carter exit years, the ugly divorce, the return of more perplexing management decisions. The Raptors sunk back into being invisible. The lone bright spots: drafting Chris Bosh, whose Toronto years feel almost forgotten now (winning two championships will do that for a person) and the drafting of Andrea Bargnani, number one overall pick.

I’ve written about Bargs before. In the last 15 years the only more disappointing #1 overall picks have been Kwame Brown and Michael Olowokandi. (We’ll probably be able to add Anthony Bennett to that list soon, to make another Canadian connection.) The Bargnani era was the opposite of those exciting Carter days. He brought the city no real glory, he never quite rose to any occasion but the team also never quite bottomed out dramatically. There were plays, good plays, reasons for hope, but still something always felt off. Bargnani never felt quite present, or significant, or taken seriously.

Looking back at what was and was not.

When Carter managed to force his way out of Toronto, we all had to stand witness as his new team, the New Jersey Nets, managed playoff runs into the second round. Worse still, the Raptors, coming off an Atlantic division winning season, faced off against those same Carter-era Nets in the first round of the 2007 playoffs. The Nets had Jason Kidd, the Raptors had their new toy, Andrea Bargnani. The Raptors lost the series 4-2.

For years we waited for something to click with the team. Chris Bosh eventually moved on, and so then we waited with bated breath for some spark to emerge from Bargnani. The Raptors were irrelevant once again. Carter moved around, to Orlando, to Phoenix, to Dallas. He passed Larry Bird on the NBA’s all-time scoring list. He’s found a nice home for himself coming off the bench as a 37 year old – yesterday was Carter’s birthday – sharp shooter for an 8th place Mavericks team. He once was the face of basketball for an entire country.

Bargnani’s visibility, however, has comically risen. For years I wondered what would happen if/when Bargs ended up on a different team. Would he become a valuable sixth man on a contender? A leading scorer? Would he suddenly emerge as a viable sidekick on a good team? Would he sink to the bottom of the NBA like a tanker full of frozen gnocchi? What would people say about this player who had spent seven years playing on forgotten Raptors teams in Canada?

For a fan base that has long held an invisibility complex, it somehow felt vindicating to have Bargnani go to the New York Knicks. This would be the ultimate test. The lights would never be brighter, the critical voices never louder. Bargnani would finally emerge into the league as the player he was always meant to be. Knicks fans recoiled, Raptors fans rejoiced.

It is a complicated emotion to describe, watching a former cornerstone of your franchise help another team win a playoff series, or a championship. It is quite another to watch a former player become exposed as something of a laughing stock.

There is almost a foolish pride there, watching the Bargnani jokes fly around on Twitter, on sports blogs, on TV. It takes a special player to get called out by Walt “Clyde” Frazier. For these latest Knicks, the most loudly agonized over team in the league, Bargs is a cosmic joke. Raptors fans are nonplussed. We’ve been there all along, shaking our heads in disbelief, waiting for someone to notice.

Vince Carter returned to the Air Canada Centre last week, the basketball house he built back in 2000-01. In an interview he recalled his start on the practice court, the work he put in back in those halcyon early Toronto days, the tough love he got from Charles Oakley.

“I’m gonna make you an NBA player,” Carter quoted. Of course, Oak got it done. Carter went from invisible to visible. He was the toast of the league and the Raptors were everywhere. Kevin Durant said they were his favourite team growing up.

This past Saturday night, second year player Terrence Ross, already a winner of the All-Star dunk contest (to follow in the VC footsteps), put up a career high 51 points against the Los Angeles Clippers. It was the most a Raptor has scored since, improbably, Charlie Villanueva, another forgotten Raptor, poured in 48. Earlier in the week Andrea Bargnani, after a season of comical missteps – this dunk attempt, his defense, this dunk attempt – crashed out for the season with a torn elbow ligament. It feels like Bargs almost did it on purpose; he had become too visible.

Ross was at the free throw line in his career making game with four seconds left. The Raptors were going to lose, but Ross was sitting at 50 points with a chance for the franchise record. Bargnani never made that list, neither did Bosh. It was a chance to become forever visible, a small slice of immortality.

Ross hit the first free throw. Then, he missed the second. He would end the game with 51 points. Tied for the franchise lead.

2 responses to “Invisible Made Visible: On Carter, Bargs and Ross”