It’s going to be heresy to suggest this, but let’s get it out in the open: for basically a solid decade, minus some weird blips in the mid-00s, we Raptors fans were allowed – yes, allowed – a modicum of peace come April, May and June, a.k.a. playoff time. Oh sure, we’d make a grand public showing about the team’s usual late season demise, we’d preach the good word of an eventual playoff appearance, the benefits it would bring to the team, the city, the country. But the thing they don’t tell you about watching your home town team compete in the playoffs is this:

It is extremely fucking stressful. 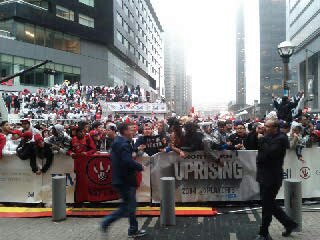 The scene at the front doors of the ACC.

Still, the NBA playoffs are a wonderful time. This year’s first round has seen a Thunder/Grizzlies series with a record four overtime games; it has invited us to witness the implosion of the once nigh-invincible Pacers; we’ve watched the Spurs and Mavericks put on a retro clinic while the Rockets and Blazers set fire to everything they touch; and the emotional stakes of the Warriors/Clippers series have been raised higher than thought possible. Even long suffering Wizards fans have something to cheer about. It has been that kind of postseason.

But, the Raptors, O my Raptors, they are my team. And, as such, what I really want are playoff blowouts. I want them to run up the score with wins by 20, 30, 50 points; the more the better. I want to feel that relief and release. I want to breathe easy. I want to go into Game 6 of this series, in Brooklyn, thinking positively. Because watching close, nail-biting basketball games is all fun and thrilling when it is not your team. You can see where I’m going with this.

Because now I have to talk about Game 5.

First, the positives: That was the best half to three quarters of basketball the Raptors have played so far in these playoffs. The effort was consistent throughout, the ball was moving on offense, the rotations were quick on defense and, most importantly, the shots were dropping. Kyle Lowry looked like an unstoppable cannonball careening down the lane, making 3s and generally wreaking havoc. DeRozan brought his usual array of moves and drew a shit ton of fouls. Amir scrambled on defense. Jonas continued to overturn the idea that a young player has no place in the playoffs. And hell, even Terrence Ross woke up and made buckets. To say the crowd was jazzed is an understatement. At one point Chuck Hayes hit a running shot from the elbow as the shot clock expired. Chuck Hayes! When Lowry made that wild leaning 3 at the buzzer to end the half, it was pure elation. The Raptors were up by 18, and the Nets looked exhausted.

Last week, Bill Simmons went off with a blazing 6,000+ word NBA column and I’m still grumbling about it. There it was in black-and-white: questions, comments, and jokes about 15 NBA playoff teams. Not one single mention of the words Toronto or Raptors. This is one incident. But perusing the online sports media, one can’t help but feel that the Raptors are a mere footnote to the ongoing “Greatest First Round Ever!” chatter.

Now, some NBA news stories deserve to overshadow our lone Canadian team. The recent Donald Sterling imbroglio and the major precedent it set via Adam Silver’s new commissioner’s office is a big deal (whether you think it solves any actual problems or not). And yes, there have been some deliriously exciting games. But somehow, and maybe this is paranoia seeping in, it still feels like the Raptors are a formality. Like everyone else is already looking forward to a Heat/Nets semi-final. The Raptors? That team in Toronto? They aren’t ready for the playoffs party. They aren’t for real.

It is said that the best sports teams begin to take on the character of their city. The Lakers are all about showtime, the Steelers work hard and win ugly, the best Canadiens teams are French. Toronto is like the Raptors in this way, always clawing for relevancy on a larger stage. We’re the first ones to trumpet any international poll that suggests Toronto is a top ranked city. We’re proud to announce that we’ve grown bigger than Chicago. We want to be known as more than “like New York, only cleaner!” And we’d prefer if our current mayor, and his ongoing circus sideshow, would go away. We’ve worked too hard for that kind of attention. We deserve to be recognized for more than that.

During the ecstasy of the third quarter, the news of Rob Ford’s latest fall from grace (his third fall? fourth?) reached the upper reaches of the ACC. This is how Toronto makes the world news.

Try to put yourself in this moment. The Raptors are crushing the Nets. Paul Pierce and Kevin Garnett have been retired at half time. Drake and 50 Cent are in the house. Morris Peterson is throwing T-shirts into the crowd. You see a sign that says “Lint-sanity.” And the mayor of Toronto has been caught again on tape in yet another disgusting, drug-fuelled escapade. I wish I could have taken a picture of that moment, framed it and hung it on my wall. The sun was rising for the Toronto Raptors and possibly setting for Rob Ford. It was a win-win.

But then the fourth quarter started. And Joe Johnson began his one-man campaign against the City of Toronto.

There is another element of the Toronto identity that emerges in moments like last night’s fourth quarter. It is called abject panic. We want to believe the best, but we expect the worst (cue Leafs fans nodding glumly). So as Joe Johnson raged against the dying of the light, as the plethora of ill-timed four-point play opportunities for the Nets began to mount, as Alan freakin’ Anderson made clutch plays, you could feel the stress level of a city rise. My heart attacks were having heart attacks. Not even the notion of Rob Ford taking a leave of absence could have saved me then.

Listen, I want blowouts. I want to see the Raptors steamroll teams in the playoffs. I want a city that believes in itself unequivocally. Then there is Rob Ford in the news again, garnering headlines we shouldn’t want. Will it be for the final time? I want to believe no one can survive this many political and personal scandals, that the Ford circus will finally be over. Let’s put Kyle Lowry on the front page.

The Raptors won the game and are up 3-2 in the series. Yet, questions still abound. A win is a win, but it was not all gravy.