Look, I don’t want to cancel your plans for the weekend or anything but we are upon the start of the Quarter Finals of the 2014 FIFA World Cup. So far this World Cup has been much like my many Led Zeppelin phases. It comes and goes every four years but when it’s here I am obsessed. Aside from my recent fascination with NBA Free Agency, this tournament has pretty much ruled my life. By now, you are either balls deep in soccer or just super fucking annoyed with all the honking and hootenanny that is birthed upon match victory of your neighborhood’s primarily dominant nationality. I am proudly the former in this case. Yes, I’ve pretty much given up interest in anything that isn’t World Cup related for the last few weeks and purely dedicated most of my schedule over group stage match ups. I didn’t even get to enjoy anything for NXNE because I was too busy getting day drunk watching the beautiful game. Free Danny Brown concert? Nope, sorry. Japan and Greece are playing. For the part time soccer enthusiast, you might say, “Well, who the hell is watching this game that isn’t Greek or Japanese?” ME!! THIS GUY!!! I WATCHED THAT GAME!! (IT ENDED IN A 0-0 DRAW!!)

Richie Guzman was all over this game.

I even managed to escape the city for a few days to go spend some time in The Kawartha’s at my friend’s cottage but made sure that we left early enough so that we can beat traffic and get there in time to watch Germany and Portugal’s first game. Good game right? What else did I watch those two days I was gone? Ghana/USA, Iran/Nigeria[i], Mexico/Brazil, Belgium/Algeria, Russia/South Korea. Beautiful sunshine and cottage living? Sure! But can I watch soccer too? I’d like to point out that there is no cable at this cottage and there are only two channels. One being the CBC. As you can tell, I really like soccer. I am no part time fan. But I don’t think that even the biggest fan of the sport, nor the most credible analyst could have predicted the results of some of these match ups thus far[ii]. It’s on pace to be the highest scoring tournament in the history of the World Cup with 154 goals so far, already surpassing 2010’s World Cup and with eight games remaining, including the third place match up.

That being said, the tournament has been nothing short of a disappointment for supporters of some usual juggernauts. But even as a sad Spaniard still heartbroken over the fall of my Furia Roja, I would be a fool if I stopped watching upon Spain’s exit. I have been tremendously excited to see the rise of a few nations that have seen their fair share of let downs in the past tournaments. The biggest surprise has definitely been Colombia. Yes, Colombia. Some might argue that they’ve had a pretty easy road to the Round of 16 and a Suarez-less Uruguay meeting to follow suit. But this is a team that has only let in two goals in four match ups while scoring 11 including the goal of the tournament so far by breakout star James Rodriguez. Colombia have simply dismantled every single team they have faced so far with the biggest test coming Saturday when they lock heads with hosts Brazil. While it will not be the easiest of match ups, I’m betting on the Colombians to hand Brazil their pink slips. Hopefully there are no own goals and history does not repeat itself.

Speaking of Brazil, I don’t know about you guys but I’ve yet to be impressed with this squad. With so much hype surrounding them since last years Confederations Cup win, I’ve yet to see any shades of past great teams that have made the tournament memorable. Remember how emphatic Brazil were in ’98? Cruising all the way to the finals only to lose to tournament hosts, France. In 2002 they redeemed themselves displaying some of the greatest footy the tournament has ever seen! Remember the OTHER Ronaldo? The original don!?! The guy who shaved everything except the front of this crew cut bangs? The guy who scored all of these goals! Yeah, Neymar is far from being that guy. Maybe it’s his size. Maybe it’s the fact that he struggles to create his own shot? Maybe it’s because the scouting report is crystal clear on his game? Neymar is not the leader that Brazil needs on their team. And on a team that is lacking firepower coming off of a (lucky) penalty shootout victory against Chile, it seems that they finally need their star player to come out and shine against a really strong Colombian side. I’d say that the only player having a stand out tournament thus far is former Toronto FC keeper Julio Cesar. But then again what goalkeeper hasn’t had a good tournament so far? Don’t answer that.

So who is going to win the World Cup? I don’t know. And if you know the clear answer then bless your psychic heart. The only two teams that have showed dominance throughout the tournament so far have been Colombia and the lone remaining CONCACAF team Costa Rica. How many of you bet on Costa Rica making it to the round of 16? Certainly not our Greek friend Chris Dagonas. If you would’ve told me three weeks ago that Costa Rica was going to beat Italy and Uruguay and top their group I would’ve probably belittled your knowledge of soccer and said something that I would later regret. Despite blowing the lead in the very last minute against Greece in their last game, but later winning in penalties, it’s only logical to believe that Los Ticos’ luck will end against the almighty Dutch. Despite scoring beautiful goals and awkward ones, I think Costa Rica are about to see just how good this Dutch squad are.

Despite being handed a victory against Mexico after a VERY debatable penalty kick was awarded to them in the dying minutes of the game, the Dutch are determined to prove to everyone on why they deserve to still be in this tournament. This is still the same team that ripped apart the defending champions in their opening match up led by Robin Van Persie’s infamous “Flying Dutchmen” header. Holland have to win this match, right? Well, If you are a betting man/woman, it is interesting to note that Costa Rica’s current odds to win The World Cup are 67-1, so if you’re feeling as lucky as Los Ticos, now would be a good time to place a bet. 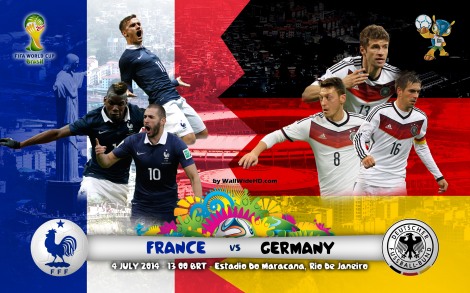 First person to make some sort of historical reference loses.

The Germany/France match up to me is bittersweet. Here are two European teams that have been very strong throughout the tournament but have seemed a bit lacklustre at times when it’s mattered most. There have been a lot of reports of Europe’s stars complaining about the Brazilian heat. I call bullshit. These are two teams that can put any 11 players on the field and still hold their own as a powerhouse. Pitting them against each other feels only right since this tournament has favoured Latin American teams so far. It’s hard for me to call the victor in this match up, but if I were to go based purely on their Round of 16 performance I would say France are the favourites. Their attacking has been on point scoring 10 goals in 4 matches so far.

Germany has failed to repeat their opening game performance against Portugal. Despite going undefeated in the group stage and taking an eternity to defeat a starving (LITERALLY STARVING BECAUSE IT’S RAMADAN ON THE MUSLIM CALENDAR AND EVERY PLAYER ON THE ALGERIAN TEAM IS A PRACTICING MUSLIM), Germany have a lot on their plate against a French squad that came into this tournament determined to erase the memories of their loving supporters who failed to see them move past the group stage in 2010. It’s interesting to note that since winning the World Cup in ’98, France has shown a bit of a pattern: 1998 Finals (Won), 2002 Eliminated In The Group Stage, 2006 Finals (Lost to Italy in Penalties. And who can forget this?), 2010 Eliminated in Group Stage, 2014???

And finally, we have Belgium and Argentina. OK, so about two years ago, me and my pal David were discussing Soccer as we commonly do and I brought up Belgium as a team to watch out for in the next World Cup. He didn’t believe me. I got really animated (as I usually do when people disagree with me) and told him that I believe they are the next side to turn heads much like Spain did back in 2008 when they broke out. He didn’t believe me. I told him that they have all the right pieces and that we would just have to wait and see. Well, they haven’t won (yet) but here they are pitted against an overrated Argentinian squad in the Quarter Finals. Did they have an easy group stage? Yes. Did they deserve to win against the USA in the Round of 16? Absolutely, despite being denied time after time by Tim Howard who easily had the best game of his career making a record 16 saves. Has this Belgian side really turned heads yet? Maybe not. But they have yet to lose a game despite only scoring 6 goals so far (Spain only scored 8 in the entire tournament in their 2010 campaign). They play a very defensive game but their versatility on the wing and on dead ball situations makes them a huge threat against Argentina.

Any team that has the challenge of trying to defend Marouane Fellaini’s aerial headers has a lot on their plate and this Argentinan squad has one of the weakest defenses in the tournament not to mention a global superstar who has all the pressure of a nation on his shoulders. How did that play out for Cristiano Ronaldo? I don’t think that Messi can save them in this one. That last minute goal against Iran was a beautiful goal but should have never come at the last minute nor have been the lone goal in the matchup. Argentina has yet to be truly tested in this tournament, much like Belgium which makes this a dream match for die hard fans like myself. There will most likely be three European teams in the Semi Finals, expect Belgium to be one of them. 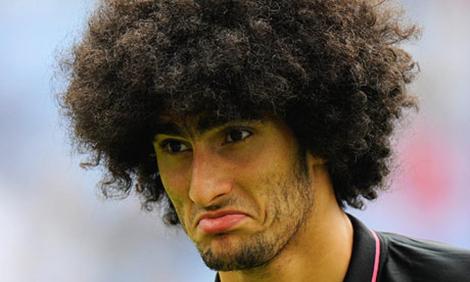 We’ll all be sad when the tourney is over.

I’m honestly already depressed that this tournament is over in just over a week. I have cheered, cried (several times), laughed and had heated debates with several regulars at my work that almost got me fired. At this point though, I feel like the commissioner of a Pee Wee Baseball league and I just wish that every remaining team could be the winner. Regardless of the outcome, we will have some pretty exciting semi final match ups and an even BIGGER final. Just no more penalty shootouts please, because my heart can’t take such anxiety after that Brazil/Chile game.

[i] Only the second half though because I was gone on a canoe trip for the first half. True Story.

[ii] My bracket is all kinds of fucked up now.

One response to “World Cup 2014: And Then There Were Eight”