“How can you support the Leafs?” This is a question I hear often, from October to April, every year. Some of my closest friends, despite being lifelong Toronto residents, are not Toronto Maple Leafs fans. They align themselves with other teams, like the Detroit Red Wings and Montreal Canadiens, and repeatedly remind us Maple Leafs fans that our team “Never does anything to improve!” and “I’ll never support the Leafs because of how they treat their fans!”

I think I’m starting to get it.

Last year, we all stared at our screens and collected our lower jaws from the floor as we watched this happen. Acclaimed signing David Clarkson went on to register 11 points in 60 games, and though he was far from the biggest problem, his lack of productivity helped to explain why the Maple Leafs went on to miss the playoffs for the eighth time in nine seasons.

What’s that? Stand up and play? OK, I guess it’s worth a shot…

So this summer is a pretty important one, to say the least, for new President Brendan Shanahan, General Manager Dave Nonis and the Leafs. With almost 17 million dollars available to spend, it might be fun to play a little virtual GM. And there are several areas of the team that need addressing. More specifically, every area of the team needs some serious addressing. Let’s start from the back.

So, I guess James Reimer doesn’t really want to play in Toronto anymore. For some strange reason, he is averse to playing less than half of his team’s games, but absorbing more than half of the blame from fans and media. In any case, if the Leafs are able to receive anything valuable for Reimer (not likely at this point), it would be a huge win. More likely, though, is that Nonis accepts any offer, something like a sixth round draft pick, and be grateful for it. That will clear the way for Jonathan Bernier to be the true, undisputed number one goaltender. In the last few days, the Toronto media has stirred up the possibility of Martin Brodeur signing up. Unlikely, though he would make for a very effective, but expensive, backup. With yesterday’s news that Reimer has filed for salary arbitration, the Leafs will likely end up paying about $2 million to keep him, while continuing to explore trade options down the road.

This week’s hot, muggy, summer weather might have been enough to make you forget, but the Leafs were downright atrocious on defense last season. Captain Dion Phaneuf and veteran Cody Franson were average, but far from outstanding, and everyone else was either still learning to play the position at an NHL level, or was so far past their prime they were no longer effective. I’ll let you decide who you think belongs in which category. On Tuesday, the Leafs tried to address their defensive issues by adding 37-year-old blueliner Stephane Robidas, who has missed significant time in each of the past two seasons with injuries. (Bonus points if you can put him into one of the two categories above!) Robidas signed a three-year (!) deal to join the Leafs, ensuring that he wears the Blue-and-White until he is officially useless as an NHL player. Meanwhile, quality defenders like Brooks Orpik, Willie Mitchell and Andrej Meszaros all switched jerseys, and not for much more money than the Leafs gave Robidas.

The defense currently consists of Phaneuf, Franson, youngsters Jake Gardiner and Morgan Rielly, new arrival Roman Polak, and Robidas. This is not much better than last season, but with another year of experience under their belts, hopefully Gardiner and Rielly are able to play more important minutes with more consistency and toughness. Tim Gleason has already been bought out, and I wouldn’t mind seeing Paul Ranger pack his bags as well. There are quite a few interesting defenders still available on the market, including veterans Scott Hannan and former Leaf Carlo Colaiacovo. Either would bump Robidas to the role of seventh defenceman, and provide a boost in defensive zone awareness, an area of weakness for the Leafs last season.

On Canada Day, the Leafs lost Dave Bolland and Mason Raymond to free agency, as well as Jerry D’Amigo in a trade to Columbus (for former Leaf Matt Frattin no less! PROGRESS!) On Wednesday, Nikolai Kulemin left town as well, joining Mikhail Grabovski in Long Island. The Leafs brought back Leo Komarov (ANOTHER FORMER LEAF! Nonis is completely out of ideas!) and the aforementioned Frattin. Raymond and Komarov are, at best, an equal swap of two-way forwards, although Raymond is the more productive point-scorer. The loss of Bolland, however, means that the Leafs, already short at the pivot, enter the summer with even fewer centres than they had in April! The premier free-agent centre this summer was Paul Stastny, who joined the St. Louis Blues on July 1st for $7 million a year. Of the centres still available, the Leafs’ best option may be the long-time Nashville Predator David Legwand, who will command about half of Stastny’s salary. At age 33, Legwand still has some quality seasons left in him. That would leave Bozak on the top line with Kessel and JVR, while Legwand could slot nicely onto the second line with Joffrey Lupul and David Clarkson. Nazem Kadri, Frattin and Komarov could form a high-pressure, disruptive third line. As for the fourth line, well, only Colton Orr remains under contract at the moment, while Carter Ashton is likely to be re-signed. New centremen Petrio Kontiola and Mike Santorelli would be left to battle it out for fourth-line duties if Legwand is signed.

A big issue last season for the Leafs was a dearth in the forward lines. They had two high-quality lines, and not much else beyond that. So far, they have done little to address that issue, and with the imminent departures of Jay McClement and Troy Bodie, the Leafs may need to add two or three bottom-six forwards before the end of July, just to muster enough forwards to avoid an error message. On Thursday, the Leafs added two depth centremen, in Kontiola and Santorelli, to address this issue. The Finnish Kontiola has spent most of his career in the Russian League, but impressed many at the Sochi Olympics. Santorelli spent last season with the Vancouver Canucks, and had 28 points in 49 games before a shoulder injury ended his season prematurely.

There is still the potential to add a depth forward or defender through a James Reimer trade, but the market for Reimer is currently at an all-time low, what with his trade demands and spotty play last season. Anyone the Leafs get in return for Reimer is likely headed straight to the Marlies.

Speaking of the Marlies, the Leafs might consider using Peter Holland as their fourth-line centre, at least to begin the season, to see how he handles the role. Holland has shown some glimpses of skill, and is not above getting his gloves dirty when needed. If either he or Fredrik Gauthier are given significant time, they may emerge not only as adequate fourth-liners, but perhaps penalty kill specialists or more.

Here is one example of what the Leafs could look like to open next season. The roster is mostly set now, but I took a couple of realistic liberties in adding Colaiacovo, and recalling promising prospects in Holland and Josh Leivo. Those moves would still leave about 6 million dollars to play with, in case someone comes available later this summer or during the season. That being said, that roster is far from impressive. Even in the weaker Eastern Conference, that looks like a team that could get knocked out in the first round, at best.

Here is what the Leafs could look like with Legwand. While his salary is far from settled, I went with a conservative estimate of 3.5 million, which would hopefully mean the term is no longer than 3 seasons. That would bounce Leivo back to Ricoh Coliseum and still leave about two-and-a-half million dollars to play with. Legwand’s addition removes all talk about being thin up the middle, but I’d still like to see a fourth line that is more about defending and aggressive forechecking, and less about fighting. I’m talking to you, Colton Orr. I sure like the look of the team with Legwand more than without him.

Big shout to CapGeek for their roster editor tool. Hey, I’m a teacher during summer vacation. What else am I doing these days?

Too many cooks in the kitchen spoil the broth. This expression came to mind with the announcement of the Leafs hiring Brendan Shanahan as President of Hockey Operations back in April. He is meant to steer the team’s decisions, both on and off the ice, while Nonis is still responsible for the personnel decisions. At the same time, coach Randy Carlyle has a preferred system and playing style. Can all three of these men work together, to bring in the type of players that fit Nonis’ budget and Carlyle’s system? When Brian Burke and Nonis were tasked with co-existing, they had success in Vancouver and Anaheim, but struggled in Toronto. Will Shanahan and Nonis be able to play nice with each other, and with coach Carlyle? Winning has a way of easing pressure, so if the Leafs get to Christmas in a promising position, things may stay calm. On the other hand, if the Leafs sputter to begin the season, there may be some changes made before the calendar turns. 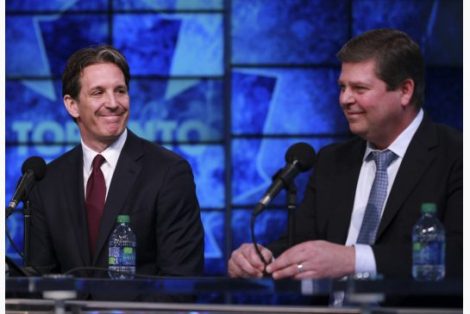 Will it be all-smiles once the action starts?

It’s early summer in Toronto. World Pride has just left town after a week-long party. International flags are still being flown all across the city for the World Cup. The Honda Indy and Caribana are still a way down the road. Hell, the Blue Jays are in first in the American League East! There is little urgency over the Toronto Maple Leafs these days. But soon, the hockey fanatics will return from their cottages, and start to look over the Leafs’ roster. Before we know it, this city will be buzzing again with hockey talk. What kind of talk, and what the expectations are, will depend largely on what happens in July.

While Nonis and Shanahan can point to some movement on the roster as progress, they are hardly the type of moves that teams make when planning for a long playoff run. Rather than use roster and cap space to add a true top line centre or top four defender, it appears that all they’ve done is replace, almost exactly, departed free agents. It’s certainly true that standing pat can be a smart, useful strategy in building sports teams. Just look at the consistency of the San Antonio Spurs. But for a team that has missed eight playoffs in nine seasons, there should be more happening than just adding a fancy suit with a new title, and a collection of “Who’s That Guy?” additions. On-ice changes are needed. Real, meaningful changes, or some fans may start to question just why exactly they support the Leafs.

One response to “Steady As She Goes: The Maple Leafs Stay The Course”