Goodbye sexy, glamorous and enchanting vampires, everyone say hello to their replacement: the revolting strigoi of The Strain. The new TV series premieres this Sunday as part of the FX Canada family, which already airs other great shows like Sons of Anarchy, American Horror Story, and the recently released Fargo. The real appeal, however, is that the show is created by Guillermo del Toro and adapted from a trilogy of books he co-wrote with Chuck Hogan[1]. Knowing del Toro, he has been there for almost everything on set (as I’ve heard from a friend working on the show), and is already credited with at least three episodes as director, which bodes well. 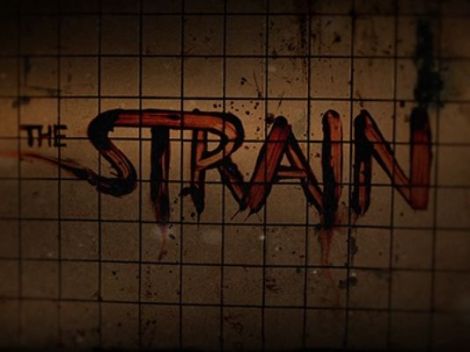 Now I am pretty invested in this series already even without having seen any major footage. The Strain book series has already had an overwhelming effect on my imagination when it comes to vampiric monsters. The books have a great balance of science and myth and in an age where we, as a culture, seem to be gravitating towards end of the world scenarios in shows (The Walking Dead, Revolution) or movies (World War Z, I Am Legend), The Strain should be able to thrive.

The story of The Strain follows Dr. Ephraim Goodweather, played by Corey Stoll, probably most recognized as Peter Russo from House of Cards. Dr. Goodweather, or Eph as he’s known, is the head of the Center for Disease Control’s Canary Team based in New York City. After a mysterious incident involving a Boeing 777 full of dead people on the tarmac of JFK airport, the Canary Team must find out just what in the hell is going on. With no explanation as to how the passengers died – except for four “survivors” – Eph, and of course the audience, is left only to question. To bolster the well-rounded cast’s credibility, the show includes David Bradley (or Argus Filch of Harry Potter to some) as Professor Abraham Setrakian and hobbit legend, Sean Astin. It also doesn’t hurt having the whole thing under the watchful eye of Mr. del Toro as well. Clearly, there is so much potential for this series. 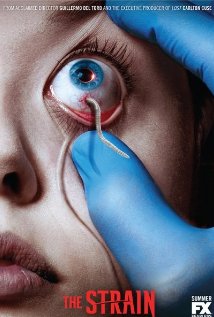 I’d like to give you some items to look out for as the series goes on. No spoilers here, so don’t worry! What follows are just some things I’m curious to see make the transition from the book to the TV series:

I remember reading The Strain when it came out and thinking it would make an amazing series or movie. Specifically, one day, about a year ago, I was talking to a friend of mine who has worked on some TV sets in Toronto. I sent a text asking, “How’s it going? Have you been working on anything fun lately?” The reply I got: “Yeah I am actually working on something called The Strain.” This was possibly the best entertainment news I could have heard at the time (outside of an announcement involving Marvel regaining exclusive control of Spider-Man and X-Men). And, as an added bonus, every time I hear of a show being shot in Toronto, it makes me want to watch it even more.

There is just something about the pride you feel knowing that shows shot in your home town could be enjoyed by people around the world. Plus, there’s always the added fun of spotting the places you know as you watch. Toronto has the amazing ability of being a chameleon city. It looks like most North American cities [Ed. Note: a blessing and a curse]; so Boondock Saints was partially shot in Toronto to look like Boston, while Hannibal is shot in Toronto but set in Baltimore. More often that not Toronto is painted to look like New York, and that’s the case this time with The Strain. 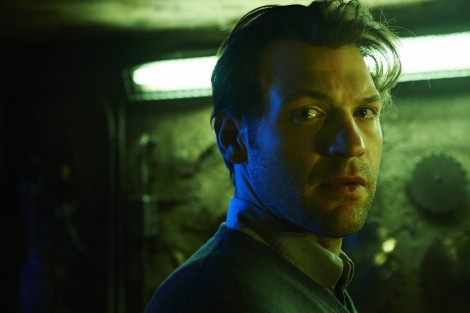 Corey Stoll would like you to watch his television program.

This is an exciting time for television. The Strain should add to the list of shows that people just have to watch. And I think it is one you don’t want to miss and catch up on later. It’s got a lot to like about it: an Apocalyptic event that New York (but really Toronto) has to deal with, Guillermo del Toro’s creative take on monsters, as well as his overseeing most of the production. This show would have gotten my attention, without even having read the books already. So it goes without saying I think you should watch it too.

[1] Hogan is also known for writing the book Prince of Thieves: A Novel, which was the basis for Ben Affleck’s film The Town.