It’s fair to say that most times imagination outstrips reality. Hell, it can usually outrun technology, too. Someone can spend hundreds of millions on Avatar and still be stuck with characters describing “unobtainium.” Meanwhile, the world of Star Wars is returning to cinemas next year and we pray it will be good (maybe for a next installment?) but it’s not really a new hope. We’ve had that dashed for over a decade and a half now. So, where to turn? 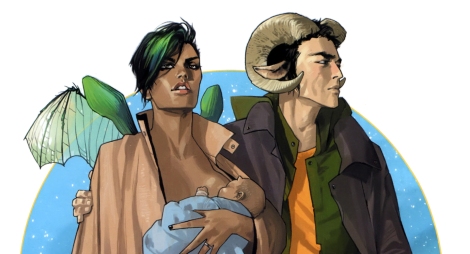 Perhaps Saga is the answer?

Imagine a story that involves two warring races, one winged and armed to the teeth, the other horned and imbued with magic. Yes, it sounds like bad fan fiction, but keep going. Now imagine a conflict between a planet of the winged, Landfall, and its moon of the horned, Wreath. And then imagine the battle spills out onto satellite worlds, conscripting countless species in different galaxies; it is war time slaughter across the universe. You still with me? OK. This is the easy part: now dream up a beautiful couple, a man and woman, he with horns, she with wings. They meet and, can you believe it, fall in love. You read that right, we’re dealing with star-crossed lovers (literally); it’s a space-aged Romeo and Juliet. Only this time, it’s the tale of how young Alana and Marko meet and become parents to the most sought after baby in the universe. (Said baby also acts as the story’s narrator.) And that’s saying something, since this is a universe that includes (deep breath): a spectral, legless babysitter; an aristocratic robot leader with a TV for a head; a giant ogre with a distended ball sack; a cycloptic writer of subversive trash fiction; a league of ruthless mercenaries; a planet dedicated to disturbing hedonism; a spaceship carved from a tree; a hairless cat who doubles as a lie detector; angry interplanetary in-laws; jealous exes and, unbelievably, even more.

This – all this – is doled out in monthly installments in Saga, a comic book published by Image Comics, written by Brian K. Vaughan and illustrated by Fiona Staples. Setting aside the free-wheeling science fiction and fantasy elements, the book appeals hard to the emotions and experiences of just being alive – child rearing, growing old, finding love, losing love, crafting an identity. It’s all there (along with some sly commentary on modern culture). And Saga is only 20 issues in.

Given all the wild flights of fancy I just ran through up there, it’s fair to ask: just who is Brian K. Vaughan anyway? Well, if you’ve been diving into comics at all in the last decade plus, he’s been pretty inescapable. After a start that included writing stories for iconic DC and Marvel Comics’ characters, including Batman, Swamp Thing, Spider-Man and the X-Men, Vaughan eventually moved into creator-owned titles published through Vertigo, Wildstorm and Marvel’s Tsunami imprint. His first book of this kind, Y: The Last Man, told the story of the sole male survivor in a world where every male mammal has died. It’s an alluring premise that initially turns heads before eagerly striding past any base notions into something far more affecting. From there Vaughan’s writing has stretched from books like Pride of Baghdad, a moody narrative about a pride of escaped lions from an Iraqi zoo, to Ex Machina, a series about a man who gains superpowers, saves one of the towers on 9/11 and eventually becomes mayor of NYC. Oh yeah, and Damon Lindelof brought him in to help on ABC’s Lost and wouldn’t you know it, the show got better.

Now, Vaughan usually gets first mention when discussing Saga, but I’d be remiss to not also highlight Fiona Staples, the other half of the creative team. After dotting around the industry for a decade, her explosive, vibrant work on Saga has very quickly caught the comic world’s collective eye with its clean lines, emotive character details and inventive visuals. Remember what I said about the imagination outstripping technology and reality? Apparently, Staples spends her days dreaming up new ways to create the impossible. Very few elements of media these days dare to go as absurdly big, and conversely, as effectively small, as Staples does here. And it’s a safe bet her budget is much smaller than the presumptive Avatar 2.

Now here’s the rub. While movies scrap deeper and deeper into the well of established properties, franchises and sequels, we still have the medium of the comic book to act as a realm for the imaginatively unhinged. Lest we forget, we live in a world where a wackjob of a movie like Snowpiercer can be dumped, with minimal fanfare, on the public despite a movie star cast and critically acclaimed director pedigree. (A sad state of affairs no matter what Harvey Weinstein says about its VOD success.) We need an environment somewhere out there to allow for creators as talented as Vaughan and Staples to be able to ply their craft. They should get to do what they love in a setting that does not immediately require a hundred million dollar budget and the subsequent pressure for mass appeal that goes along with it. On the flip side, we should be prepared to gaze through whatever window in which they choose to reveal their story. The appeal and benefit of Saga and its ilk is the draw of inconceivable worlds and pure imagination. It’s a fair trade, I think, all-around.

Marko and Alana: the lovely couple.

Saga is one of the best stories being told right now, regardless of format. At times a rom-com, a sci-fi epic, a fantasy blowout, a tale of political machinations and life in wartime, and, amazingly, lots more in between. For many, Saga’s brilliance is already known and I admit I’m definitely stacking the deck here, asking an almost rhetorical question at the outset. But still, with volume three of the trade paperback collection (which assembles issues #12-18) released in March, there really is no time like the present to jump in. And, as it happens, issue #21 comes out today.

The Verdict: Put aside any petty comic book biases and check out Saga volume one today. After you’ve read a few issues packed with wild characters, super saturated visuals, and emotions that tug at both the heart strings and the brain stem, you’ll be convinced. Saga is good.

One response to “Is It Good? Saga”