There’s this place that exists where people dress up in elaborate costumes, sci-fi and horror genres are cherished, nearly every comic book created is available for purchase, and the most talked about video games are demoed. If you haven’t heard of this place you’ve probably been living under a slab of kryptonite. I’m talking about comic conventions, or as we know it in Toronto, Fan Expo Canada. Appearing every year in Toronto since 1994, Fan Expo brings together the foremost experts and fans of sci-fi, horror, comics, anime, and gaming to a convention where they can showcase the latest and greatest in their fields.

I, my friends, am a geek. I was raised on Monty Python and Star Wars, bonded with my dad over Halo and Quake, and watched every episode of Buffy the Vampire Slayer in real time from Grade Seven to Twelve. I eat up Joss Whedon-anything (a moment of silence for Firefly, please), have odd crushes on fictional characters (be still my heart, Colossus) and am a total Whoovian (my family actually owns a Tardis teapot). So, why haven’t I been to a ComicCon or Fan Expo before? 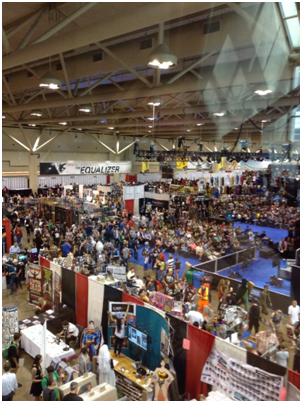 Basically, it’s all about the title. I didn’t realize that these conventions had more than comic-fandom in them. I am a big fan of sci-fi and I had always wanted to get into comics, but had zero knowledge of how to actually do it. I had dabbled in trade paperback collections in the past: scrambling to finish Watchmen before the film came out, picking up a few Astonishing X-Men and Saga books, and let me tell you about mine and my sister’s obsession with a certain Riverdale Ginger. Yet I was so overwhelmed by the sheer volume of different comics available to me that I was quickly intimidated from pursuing this hobby. For the decade-spanning comics like Superman or Spider-Man, I didn’t want to begin at the wrong starting point and have to pull through pages of Wikipedia to find out where I was coming in.

On top of that, comic book stores intimidated me because I felt that everyone there knew way more than me. Pop culture has painted them into elitist niches much like the space that record stores hold in my head. (Think of the dudes from The Big Bang Theory visiting their comic book store or the wonderfully snarky Jack Black in High Fidelity.) Also as a modest feminist, I hated feeling intimated by what I imagined to be a male dominated arena, even when I know that females contribute and participate in comic consumption as well. So, I swallowed my shyness, donned my Firefly-Dr Who mash-up t-shirt and armed with the knowledge that I could name-drop the author of Saga, headed into the fanatical tsunami of Fan Expo.

When I arrived, the first thing I noticed was how BIG the convention was. There were hundreds of people milling about buying tickets, projecting their excited pheromones into the air. I was swept up in the enthusiasm. Fan Expo takes up five floors at the Metro Toronto Convention Centre. Two floors are designated as vendors/exhibitors while the remaining showcase a variety of panels and Q & A’s.

When my friend and I entered, we couldn’t believe how massive the main vendor section was. Four hundred plus vendors and exhibitors were set up to hawk comics, memorabilia, free samples and autographs. There was a video game corner with games like Farcry 4 and Halo 5 available to demo. There were exhibits where fandom communities such as the Toronto Browncoats (Firefly), the 501st Legion (Star Wars) and the KAG – Kingon Assault Group (Star Trek) showcased their enthusiasm. There was Artist Alley where comic book authors and illustrators signed and promoted their work.

When my friend left to see a panel discussion on anime music videos, I searched the stalls for comics that I wanted. To my surprise, people were not as critical of my lack of comic knowledge as I thought they would be. One vendor praised me for my t-shirt, while another offered me suggestions based on the (few) comics I already knew. I ended up walking away with four issues of Stephen King’s Dark Tower series, the latest issue of Saga and a satisfied ego.

The Fan Expo guide (aka. your best friend)

In addition to shopping and perusing the exhibitors, there are also panels that you can take in. These range from technical / industry how-to’s such as “Blood on a Budget” to upcoming previews of new products to discussions with actors, writers and industry professionals. I admit that I didn’t really research what each one was before joining one. Thinking I was clever, I highlighted panels I was interested in based purely on the one line descriptions in the program. The DC Entertainment: All Access 101, which I assumed would be about the history/introduction to DC Comics, turned out to be just upcoming previews of their new media. It was informative (Did you know that Batman is celebrating his 75th anniversary this year? Or that there are three new DC shows premiering this fall?), but it didn’t really inspire me.

The same thing happened when I went to the Dr Who Society – Dalek Building 101. I thought it would be a hands-on experience and I’d leave with my own mini-Dalek. Instead, I found myself learning how to make a fully-functioning, life-size Dalek and was introduced to a whole new sub-community of Ontario Dalek builders. It was actually really interesting to see how they made them, but it’s very doubtful I will spend the next eight months making my own.

Another thing I didn’t budget for when arriving at Fan Expo was that each panel takes about an hour, on top of the wait time you have to allot beforehand to actually get a seat! I wrestled with the idea of catching Arthur Darvill’s Celebrity Q & A until I realised that people were lining up two hours in advance for it.

One cannot talk about Fan Expo without mentioning the Cosplayers. Cosplay is short for “costumed play” where fans dress up in costumes of their favourite characters. Some cosplayers are even famous just for cosplaying! I wasn’t too thrown by all the costumes as I had seen a TV series (Heroes of Cosplay) which chronicled the lives of a few famous cosplayers, but it might be a little daunting to others. You could be standing in line for the washroom wedged between Leeloo from the Fifth Element and Misty from Pokémon.

If I was worried before about the lack of a female presence at Fan Expo, I didn’t have to be after seeing the Cosplayers. Sure, some of them wore revealing outfits but if you are trying to copy a comic character, most do wear tight clothing. Also for every high skirted anime hero, there was a Katniss or Michonne. Some of the more memorable characters I saw were: Ygrette capturing Jon Snow, two Jessica Rabbits (a male and female version), a working R2D2, a Lego man made from duct-tape, and a whole whack of Tardis dresses. It’s amazing to see how creative some people can be. It’s encouraged me to dress up next year.

The biggest attraction at Fan Expo is the celebrities. Some were only available for panel Q & A’s, others sat at their autograph booth waiting for fans to swoon. You had the option to purchase Photo-Ops (you get a professional photo taken at a whopping price) but I lacked the funds for that treat. On the day I went, there were some big names (Matt Smith, Adam West & Burt Ward, Edward James Olmos), some middle draws (Arthur Darvill, Brian Azzarello, Robert Englund) and some lesser known stars (Ray Wise, Steven Ogg, Yaya Han).  However, the biggest name was… Stan Lee! Stan is a regular at comic conventions and did not disappoint. I’m pretty much in love with this man now and I don’t normally like old people. He’s witty and hilarious, with not an ounce of modesty (although not in the stuck-up way, in more of the “hey, I invented some of the greatest super heroes ever so I’m gonna take credit for that” way).

He participated in a Q & A by tackling classic questions like “What’s your favourite Superhero?” (He doesn’t often choose favourites, but if he a gun to his head it’d be Spider-Man) or “What superpower do you wish you had?” (“Luck. Someone shoots at you, they miss! You enter the lottery and you win!”) When someone posed the question “What would you like to be remembered for?” he quipped back, “Oh, the good panel I’ve done here tonight.” The best question came from one adorable, precocious child. With her sweet lisp she asked, “Mr. Lee, Did you ever think of making Spider-Man shoot webs from out of his butt?” After the laughter died down, he calmly replied to her: “I think you’d make a better comic book writer than me!” He closed the panel with a request to all us fans: “Can you guys contact the Academy of Motion Pictures and ask them why they don’t have an award for best cameo?” Don’t worry Stan, I’ll be writing them as soon as I’m finished this article.

After reflecting on my first experience with Fan Expo, there are a few things I wish I had known or done differently. Hindsight is 20/20, but luckily you can benefit from my inexperience:

Even though I was hesitant at first, I really enjoyed myself at Fan Expo. It wasn’t as male-dominated or intimidating as I thought it would be. Women enjoy the convention as much as men and my lack of comic knowledge wasn’t a hindrance. If you are a fan of the basic nerd interests (sci-fi, horror, anime, comics, and gaming), then you would do well to visit Fan Expo next year. Look for me, I’ll be the one with the super excited grin on her face and an S emblazoned on her chest.