Over the past five decades, Brian Wilson has been a lot of things: a genius, a victim, a recluse, and most recently, a survivor. As a pop music icon, Brian Wilson is tricky to pin-down. He was never as easy to love as a Harry Nilsson, nor was he as easy to hate as a Lou Reed. He never had the charisma of a Paul McCartney, nor the unique image of a Bruce Springsteen. But for all that Brian Wilson lacked, his music made up for tenfold. The Beach Boys catalogue is a sprawling mess that begs to be discovered and scrutinized. As often as it is perfect, it is chaotic, and where there is beauty, uneasiness lurks not far behind. The story of Brian Wilson has always been linked to the music he created. It is the roadmap to his success, his failures, and his attempts at redemption. But Brian’s success was hardly modest, and where there is great triumph, the public demands a story.

This Sunday, TIFF will première Love & Mercy – The story of the Beach Boys’ Brian Wilson. A comically overweight John Cusack will lie in his bed, personifying the most commonly known Wilson anecdote. While Paul Dano will play a younger Wilson, Paul Giamatti will make an appearance as Brian’s controversial psychologist, and Elizabeth Banks will play Brian’s first wife. It will be a rousing American tale of struggle, redemption, overindulgence, love and mercy.

It’s tough to ignore the overwhelming number of music biopics in today’s movie landscape. James Brown just got the treatment, and we’ve already seen stills of the upcoming Jimi Hendrix and Miles Davis profiles. Love & Mercy will fit right in as another story of troubled genius prone to mistakes, poor judgment and overindulgence. If it documents these peaks and valleys properly, Love & Mercy should be an intense and inspiring tale. But the film is not a documentary, so it will take liberties where it needs to.

Given that most music fans most often note Brian for writing Pet Sounds and Smile, it is easy to forget that the Beach Boys were an extremely famous band for a very short period of time in the 1960’s. They had thirteen top 10 singles on the US Billboard singles chart between 1963 and 1966, with three of those reaching #1. Of the fifteen albums they released in the 1960s, eight of them charted in the top 10. Arguably their most famous album (but not most successful album — Surfin’ USA and Summer Days and Summer Nights!! both hit #2, while Pet Sounds peaked at #10), Pet Sounds, was released at the tail end of this winning streak, but immediately before the Woodstock era cast its psychedelic shadow over their brand of naïve, sun-soaked youth jams, signalling the end to their reign on the charts.

Despite a relatively short period of massive fame, the Beach Boys have secured a place in the pop culture lexicon for relentlessly referencing their brief moment of dominance in the genre they helped cultivate. In the 1970s they released six hits compilations, including Endless Summer, which debuted at #1 on the Billboard album charts in 1974. In 1988 they scored a #1 hit with “Kokomo”, a song about going to the beach. Twenty-four years after that, they performed “Wouldn’t It Be Nice” with Foster the People on the MTV Video Music Awards. Somewhere in between this, the Beach Boys were regulars on American network sitcoms, making stiff cameos on Full House and Home Improvement. 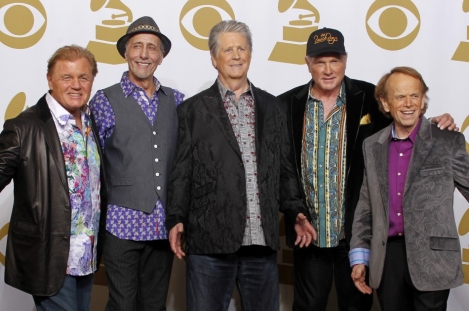 Nowadays, the Beach Boys tour casinos and halftime shows throughout North America, playing their early, surf-centric material only. Mike Love has held the reigns as leader of the band ever since “Kokomo.” For Love, this was always the band’s destiny — playing crowd-pleasing sets to legions of fans that just want to have fun, fun, fun. The show honours the band’s west coast good-time roots while attempting not to dive too deeply into self-parody. In essence, it’s a lot like “Kokomo”: vapid, predictable, and completely uncomplicated. But for Mike Love, this lack of sophistication and stubborn straightforwardness is what has kept the Beach Boys active for over fifty years. They’re the greatest band in the world because they’re still here.

From about 1979 up until their first retirement in the late 1990s, the Beach Boys embraced “Kokomo” as the total personification of their brand, right down to the Hawaiian shirts and Beach Boys branded ball caps. Their relentless unwillingness to compromise their surf-centric brand was basically their only aid in keeping themselves in the limelight, and with “Kokomo”, it sort of worked. But when you consider stacking that one song against over twenty years of poor artistic choices, you begin to realize that their sustained success was probably more accidental than the result of good faith.

Their last great album, 1977’s Love You was originally a Brian Wilson solo album, and unlike anything in his band’s catalogue. But when the creative wealth was eventually shared, the album bombed and Brian’s creative spark fizzled. By the mid-1980’s the Beach Boys channelled their energies into incessant touring and a re-branding as an “An American Band.” While these moves reeked of insecurity, they exposed what Brian and the band wanted most: redemption, respect, and a tidal wave of security to carry them into the sunset. But for every triumph, there was the inevitable fumble. 1

When Love & Mercy does eventually come out in theatres after TIFF, Brian will get another shot at redemption. Ideally, the movie will emphasize the influence of genius, and the pain and suffering of depression and illness. Hopefully, Brian will feel our sympathy and gain more respect. But even if it fails and flops, we’ll always have the music, which will probably tell a better story anyway.

1 I had no idea how to mention this video but I have to share it because its mere existence is baffling. Simply, it’s Carl Wilson singing “God Only Knows” in the back of a poorly lit country club dining room. The performance isn’t completely terrible, but it sheds no light on why Carl was relegated to performing directly in front of the kitchen, or why the restaurant staff couldn’t chill out for three minutes while he played one of the most beautiful songs ever. Also, just when you assume its not terrible enough, the cameraman pans back, revealing the half-dead, indoor sunglass-wearing keyboard player/drum machine operator, all you can do is recoil in pain and disbelief, all while listening to probably the greatest song ever written performed by its original singer, still pouring his heart out.