Were you as surprised as I was to learn that the 38th Toronto International Film Festival starts today? Perhaps surprise is the wrong emotion. Let me explain.

At my first year at the festival back in 2005, I didn’t know what I was doing. I read somewhere (online?) that tickets went on sale on a specific date in early September. So being an industrious sort, I ventured downtown to the TIFF box office. In those days (sayeth old man Reynolds) there was no Bell Lightbox. The festival box office moved from place to place, wherever enough space for staff and interminably long lines could be found. This was something I learned quickly that day as I marched into the Manulife Centre at Bay and Bloor. It was 8 o’clock in the morning. Surely, I thought, I am on top of things here. Inside there was a reasonably small line of people. The TIFF tickets of my choice seemed secured. Until, that is, I was told the lineup actually started outside.

At 8am in early September 2005, I stepped outside onto Bloor Street and discovered that the line for tickets extended south down the block. I ended up standing in line outside for five hours.

This was my first experience of the Toronto International Film Festival.

Since that rude awakening nine years ago, I’ve honed my TIFF game. Subsequent years saw me cramming 25 movies into ten days; or using up runs of 10-coupon packages, supplemented with stray tickets here and there. I even tried a hand at volunteering, managing to see films around (and during) a work and volunteer schedule.

Somehow this year, I regressed. I missed my window of opportunity to buy TIFF ticket packages. Dark was the day of that realization. Then, adding insult to injury, I almost missed the opening of the box office. While the days of waiting outside in lines are gone, one still has to be prepared to wait – in this case, in queues online instead. Somehow, at the eleventh hour (or more precisely, around 8am again) I jumped into this digital line and scrambled to make a cogent batch of film selections.

Unlike last year when I was accompanied by my brother and contributor Dennis, for this edition of TIFF I will be making the journey solo — though I do hold out hope of seeing a couple of films with reclusive philosopher and contributor Nick Fernandes. In any case, despite an incredibly rocky start (and an overly expensive outlay of cash), I will be watching some TIFF movies.

We start things off three days in on Saturday afternoon with a film that checks off all of the qualities that make for a solid and safe TIFF pick. An up-and-coming director in Mia Hansen-Løve? Check. A charismatic known actress in Greta Gerwig? Check. A unique and intriguing setting? Eden apparently takes place during the EDM-fueled nights of the 90s (think Daft Punk). CHECK.

Given how affecting Hansen-Løve’s previous film Goodbye First Love ultimately was, I’m ready to see her make the leap. Lord knows we could use some more female directors among the big names of filmmaking.

To paraphrase Stephen Colbert, sometimes with a film pick you’ve just got to go with your gut. That’s how I arrived at Theeb. What do I know about it? It centres on two Bedouin boys in the Ottoman empire who are trying to survive as World War I and the Great Arab Revolt brew beyond the horizon. The titular character is swept up in a coming-of-age tale set during the time of T.E. Lawrence, which means the film is basically designed specifically for my enjoyment. The program of which Theeb is a part is called Discovery. I’m glad I found this one.

This film is a huge toss-up. On one side: the Dardennes brothers, Luc and Jean-Pierre, are essentially legends of modern filmmaking, cranking out award-winning pieces every couple of years. They can work very small (as with their Palme D’or winning L’Enfant) or work, um, less small as with this year’s work Two Days, One Night which stars an actual movie star (Marion Cotillard). The film tells the story of Sandra (Cotillard), a factory worker who has two days to convince her former co-workers to vote in her favour so she can get her job back. I’ll admit, I’m hooked by the premise.

On the other side: I really did not enjoy watching L’Enfant one bit. It was stupid people doing dumb things for 95 minutes (it felt longer) and I was hoping all of its characters would accidentally drown (which seemed possible at various times in the film). Two Days, One Night also won accolades at Cannes, so to say I’m anxious to see how it turns out is an understatement.

Staying on the trend of hit or miss films, here we have Wild Tales a film made up of six short anecdotes that poke at Argentinian society in darkly comic ways. This is also the first film I’m seeing at the behest of Fernandes, so while I’m basically going in unprepared, he sounds convinced. As always with short film anthologies, it is best to be ready for a hit-or-miss experience. On the plus side however, the film does feature the Argentinian actor Ricardo Darin, who is something to watch. The score sits at 1-0 in favour of a positive experience. 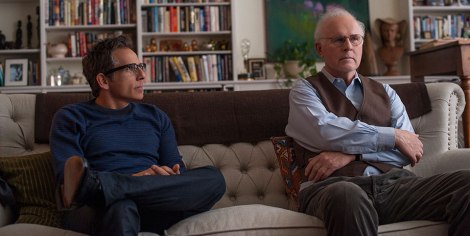 While We’re Young – Thursday 11:30am at the Elgin Theatre (Visa Screening Room)

Since Starred Up has resolutely decided to not come out in Toronto yet, and Unbroken is still months away, I decided to get in on the Jack O’Connell ground floor a different way. In this story set during the Troubles in Ireland in, um, 1971, we join O’Connell as a young English soldier who gets cut off from the rest of his squad and left to fend for himself in a Belfast under siege.

I hope there are subtitles.

To completely mix it up, at the behest of Fernandes and some of the local media, I chose to take in Abderrahmane Sissako’s Timbuktu. It’s another film that achieved acclaim at Cannes, and it’s the kind of world cinema that one can only experience at an event like TIFF. Yes, Toronto plays host to all kinds of different films during the year, but this is the one time when big audiences can see potentially great films they wouldn’t otherwise see. I admit I don’t know much about Sissako’s past work, but he’s in the Masters program, and the film’s story (involving a cattle herder who comes into conflict with jihadists in Mali) sounds like it needs to be told.

Plus, whoa, Tobey Maguire – who is at his best playing intense weirdos – is Bobby Fischer. What the hell, why not.

So that’s where I’ll be for the next ten days. Feel free to say hello if you happen to see me standing in line somewhere. And of course, as always, happy TIFF-ing, everyone!

[1] It should be noted that this is not a final list. I may still try to buy tickets during the festival, time and sanity permitting.