They’ve become the two words I despise most as an avid fan of Toronto sports. They’ve been bandied about in regards to the Blue Jays clubhouse for years, were applied to the Raptors in the lean seasons between the Chris Bosh departure and their current success, and have been attached to every single management or roster move the Toronto Maple Leafs have made since I was knee high to a grasshopper. I’m not even going to get into Toronto FC.

Pundits and talking heads seem to toss it in almost as an afterthought, or a requirement. They’ll make a perfectly salient point about whatever-the-hell – style of play or accountability or a comment made by the travelling secretary’s assistants cats former owners bowling coach – but no matter what they always finish the thought with “and that goes back to the whole talk of a culture change around this team.”

Does it? Does it really? Do you even know what you’re talking about anymore? Or is ‘culture change’ just the new ‘synergy’? In other words, a buzzword that can be applied across the board to myriad situations, that is constantly used as a crutch, to the point that it doesn’t even really mean anything anymore. 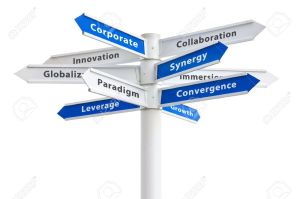 All signs point towards… what again?

The term culture change (and synergy, for that matter) actually does have a meaning. An important one. Unfortunately for the Toronto sports scene – for Toronto sports culture – that meaning is not something that’s actually achievable, at least not in the sense that it’s currently being portrayed.

A major reason for that is because the demons don’t exist, at least not in the way that we’d like to think they do. Professional athletes don’t strap on their gear and hit the ice/court/diamond with the weight of those decades of losing on their backs. The best ones are aware of the history but concentrate on the present. The worst ones don’t give two shits. Most athletes fall somewhere in between. The ‘culture’ we’re seeking to change simply isn’t real. Pressure is applied by the media, supposedly on behalf of the fans, and narratives are mined (if not outright invented) because in our 24/7 sports culture; narratives are required. Fans are hungry for more, more, more. They want more coverage, more access, more games. They want more quotes, more rumours, more controversy. They want MORE when sometimes, there simply isn’t anything left. When that happens, whatever the popular sentiment around a current team is gets exploited and exacerbated, until there’s nothing left but an overproduced and under researched drivel-filled husk.

The Raptors play as a team! Endless stories about their unselfishness and camaraderie are abound. Suddenly they can do no wrong. Except now they’ve lost 7 of 10 and you can feel the discontent stirring, like poison in a wound. ‘They need to make a trade! This team can’t win it all as assembled! AHHHH!’

The Leafs are inconsistent! Constant rumours about dressing room spats and selfish individuals swirl. Trade Phaneuf. Trade Kessel. Jake Gardiner, as a human being. Bernier doesn’t know Mandela. Randy Carlyle gets fired. Brendan Shanahan says nothing, creating a constant conversation about what he might say if he chose to say anything at all.

The Jays can’t get over the hump! Speculation runs rampant about ‘how close this club really is’ and ‘whether or not certain individuals are really committed to winning’, because surely if they were really committed, well by gum, they’d have won by now! R.A. Dickey is a ‘bad clubhouse guy’. Russell Martin is a clubhouse saviour ‘Is Alex Anthopoulos on thin ice? Is John Gibbons? How can they not be? Well why/why not/who knows?!?’

What unholy monster is this?

It all reeks of a culture that needs to change and this time I’m not talking about the ‘culture’ present in the dressing rooms of teams we support. That’s our culture, as fans. Not just as fans of sport in general, but specifically as Toronto sports fans. It’s easy to see what’s spawned it; Leaf fans are suffocating under the burden of nearly 50 years of futility. It’s not just that it’s been since 1967 – it’s the putrid product that has been on the ice for the majority of the time since. It’s not often a franchise can write off nearly two decades in their history as being complete and utter failures, but the Leafs have managed to do that, when you consider the 1980’s and the 2000’s as collective wholes. The 1970’s and 1990’s were half decent, but there were still a few stinkers in there. As is often the case, it’s not the ‘what’, it’s the ‘how’. The frustration is so palpable in any discussion about the team it almost seems like you can attribute it as a kind of pathetic fallacy to the fan base as a whole, until something changes.

Being a Raptors fan and a Leafs fan is not a mutually exclusive description. You can often feel that frustration seeping through when discussing the Raptors current positive results. Fans are antsy to make things happen; there’s a feeling that this recent success could all slip away at any moment. There’s also the growing burden of 20 years of futility; one playoff series win in your entire franchise history will do that to a fan base, even if hoops is your game of choice and you don’t give a good goddamn about the Buds. The Blue Jays are the only team with any kind of ‘recent’ success, but with their World Series wins 22 years in the rear view, fans are desperate for a winner – any winner – NOW.

Greivis Vasquez of the Toronto Raptors gave an incredibly candid and insightful quote when fans actually booed the Atlantic-leading Raptors recently. You can read the entire thing here but my favourite part read as follows:

“I find it discouraging when they boo us, it’s not nice. We’re playing hard for them and representing the city, and we’re one of the best, and we want to win. That’s why we have meetings, we have practices. We’re human, we’re going through struggles, and we’re going to start winning. We WILL start winning. We’re not losers. We’re not going to stay like this. We’re not going to sleep, we’re not happy… We just want our fans especially to ride with us, through these struggles, because we win together and lose together… You guys have been here for a while. This team actually started to win last year. You guys haven’t seen any struggles since we started winning. Everything was blue, beautiful, clear, and now you’re seeing some struggles.”

You can see two things from the quote; one that Vasquez doesn’t completely understand how deep the poison runs in the veins of Toronto sports fans and two, that despite that, he completely feels its effects. How could he not? The desperation is palpable and it’s destructive. As fans, we’ve become front runners of the worst order. If we’re not winning championships, then we’re losers. We can’t abide any lack of success, because that means it’s going to be like all our past failures. We’ve completely lost our ability to separate experiences, to enjoy moments as they come.

What it ultimately comes down to is the aforementioned desperation, and more importantly, the overwhelming need for instant gratification. Enough has been written about the second idea within our current culture that I don’t need to go too deeply into it, beyond the fact that people are almost certainly less patient as a whole now than they were 25 or 50 or 100 years ago. The desperation is unique to one of the most tortured collective fan bases in all of sports. Pair the two together and you get what amounts to a self-fulfilling prophecy. We think we’re going to lose, so every loss seems worse. We can’t believe we’re winning, so we can’t actually enjoy it while it’s going on. Because winning itself is the only true fix, and deep down, the fans know it. Everything else is just window dressing, like a bored kid fidgeting when there’s no end to the boredom in sight. He doesn’t actually care about what he’s doing, he’s just doing it so that he can be doing anything else, other than think about what’s bothering him.

Usually there’s some kind of break, some kind of relief. One team might meet with some success, while the others are struggling or rebuilding. The fans have always had the option of expressing displeasure with their wallets, of course. But Raptors games are fun regardless of the outcome and Leafs tickets are like unicorns; the only sport where fans won’t come out for mediocrity is baseball and guess what? The Blue Jays stadium is often half empty, despite their being the team that has met the most consistent ‘success’ during this century. The problem is that in baseball ‘success’ doesn’t always equal ‘playoffs’. In Toronto’s case, it seemingly never does. I mean, to invoke Bill Simmons, God might hate Cleveland, but he sure doesn’t have the warm and fuzzies towards Toronto.

‘Dan’ you’re thinking, ‘I gotta say. This is depressing as hell. Normally you throw some jokes in, take a positive spin and try to make me feel better. What gives man?!’

Fair enough. The problem is that the people who embody the negative traits (stressing about uncontrollable situations, pushing irrelevant narratives, pining for pie in the sky trades and quick fixes, etc.) I’ve related above, are also people who, a) don’t know that they’re doing that, or, b) couldn’t give two craps and will never stop doing that. That said, if you are somehow one of those people and you’ve become self-aware, like some sort of startlingly negative SkyNet that only roots for flawed sports teams, this is how you look to everyone else:

Let’s stop calling for a culture change. We’re the culture. Get some Gandhi in your life and BE the change, son! Let’s act like we’ve been here before, Toronto sports fans. Jo Jo the Idiot Circus Boy needs to go away. He’s an embarrassment.

One response to “Don’t Call it a Culture Change: It’s Been Here For Years”