Since the NHL Draft Lottery was held on April 18, fans of the Edmonton Oilers and Buffalo Sabres have been getting geared up for the major additions of Connor McDavid and Jack Eichel, respectively. Those picks are all but carved in stone.

The draft will get interesting after that, when the Arizona Coyotes hold the third pick, and the Toronto Maple Leafs follow them in fourth. The projected players in those two spots are Erie Otters centre Dylan Strome, and Boston College defenseman Noah Hanifin. Also drawing interest, reportedly from Leafs’ assistant GM Mark Hunter, is GTA local boy and former London Knight, Mitchell Marner. The Leafs, as it stands now, can only sit and wait to see who the Coyotes select before knowing their decision to a certainty. 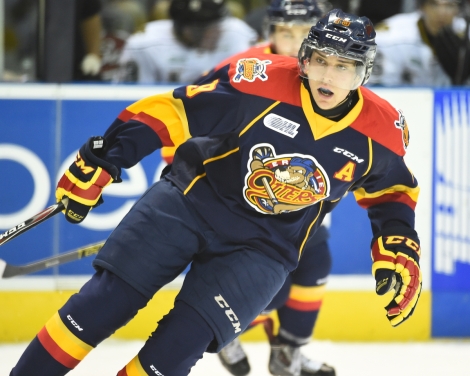 Will this be the face of the newest Leaf?

With the hiring of new coach Mike Babcock, it would seem that the Leafs’ preferred choice is Strome. He is the prototypical Babcock forward: big, strong, and skilled in keeping the puck. But will he still be available when the Leafs’ turn comes up?

A glance at the Coyotes roster suggests their weakest point may be on defence, where they employ the promising Oliver Ekman-Larsson, and a collection of AHL journeyman and young, unproven players. On the other hand, the top two lines are centred by Czech giant Martin Hanzal, and the experienced, yet still only 25-year-old, Sam Gagner. They also surrendered 3.26 goals per game last year, so perhaps they will be angling for Hanifin.

For their part, the Coyotes are keeping their cards close. General Manager Don Maloney said recently that there are “half a dozen” potential players they are scouting and bringing in for workouts. Assuming they stay true to most predictions and take Strome, the Leafs might be taking a look at another Canadian forward.

Markham’s own Mitchell Marner of the London Knights, has recently been rising up the draft board rankings. Marner was drafted by Toronto’s current assistant GM, Mark Hunter, when Hunter was the General Manager of the Knights. He finished second to Strome in OHL scoring last season, and though considerably smaller than Strome, players like Tyler Johnson and Mats Zuccarello, as well as Toronto’s own Phil Kessel, have shown that a small, speedy, elusive winger can have success playing against the big boys.

Hanifin, for his part, is confident that he is NHL-ready. After fast-tracking through high school, he was the second-youngest player in Boston College’s history, no small feat for one of the best hockey programs in the NCAA. He is big and strong, and scored 23 points in 37 games in his first, and only, season with the Eagles. The Leafs already have a proven NCAA product on the blue line in Jake Gardiner, who has been one of the only reliable defenders in the past few seasons. They shouldn’t shy away from Hanifin’s lack of major junior experience.

What will the Leaf’s braintrust do?

A final possibility exists and that is that Shanahan trades down for a later pick and a prospect. Moving the fourth pick, along with a player like Kessel of Dion Phaneuf, can give the Leafs a lot of salary cap space to work with over the next few years. The difference between the fourth pick and, say, Philadelphia’s seventh, is not such a big difference, with talented forwards like Lawson Crouse and Mikko Rantanen likely to still be available.

As it stands now, Toronto hold the fourth pick. So who should they select? If Strome is still on the board, he is definitely the smart choice. He looks most like a future all-star, and has the combination of size and skill and centre the Leafs have been lacking since the days of Mats Sundin.

If Strome is taken by Arizona, then the Leafs should look to build from the blue line with Hanifin. It may take more time for defencemen to develop, but the recent case of Duncan Keith, twelve-year veteran and 2015 Playoff MVP, a solid blue line can be the core of a championship team.

Mitch Marner, while an intriguing and definitely skilled forward, may only fall to the Leafs in the event of a pick swap with the Carolina Hurricanes or New Jersey Devils, in which case the Leafs should be looking for talented prospects in exchange for some sort of salary dump.

Whatever happens, coach Mike Babcock and GM Brendan Shanahan will look back to the summer of 2015 as a turning-point for the franchise. Whether that turn is up or down, we will have to wait and see.