And yet, there have been films to love so far in 2015. There always are, even if you have to dig. When I began recounting the films I’d seen so far this year, and considered the films I’d already missed in theatres, I realized there are always–always–good to great films out there, an endless embarrassment of riches. It’s why I’ll always be married to the art form.

So, in keeping with that spirit, I decided to bounce through the oldest of wedding rhymes around to reflect on the year in film so far. Cue the bells and you’ll see what I mean.

Let me be quick in saying that Ex Machina is a very good film. It’s got some brilliant production design, an exacting score, and a sense of narrative purpose that is very self-assured. It asks big, tough questions and gets us thinking. Oh yeah, and it has Oscar Isaac single-handedly seducing us into believing anything and everything.

But, it is still a film about the creation of artificial intelligence and all that implies. While it says some interesting things about a robot’s relationship to man and the use of search engines as a mirror for the human brain, this is still (just) a story about a machine that longs to be free. Ex Machina, after all its mystery and visual derring-do, goes in exactly the direction you’d expect it to go. When it arrives at it’s conclusion, the reaction is more “huh” than “wow.” Still, Oscar Isaac, man. It’s all happening. 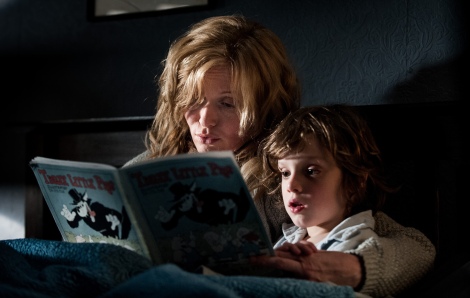 Ironically, the two “newest” films I’ve seen so far this year (note: I missed The Duke of Burgundy and Results, to my eternal shame) are both actually films that have crawled through the festival circuit for stretches of 2014. First, there’s Kumiko, the Treasure Hunter, the latest film from the Zellner brothers. After finally getting a limited release in Toronto in April, it was my pleasure to take the strange trip promised by the film’s premise. (Based on a “true” story about a woman who’s convinced the buried money in Fargo is real.) Despite the film’s cute framing, Kumiko is a horror film in its way, as the margins of reality gradually collapse on our heroine’s hopeless sense of optimistic fantasy. As grim as that sounds, Kumiko is a gem.

For an actual horror film though, go no further than The Babadook. Straight up, Jennifer Kent’s debut (she wrote and directed) will keep you up at night. The film’s effects will haunt you, its noises will seep into your subconscious, and it’ll give you pause the next time you want to senselessly praise the supposed “joys of motherhood.” The Babadook is the rare film that arrives fully formed in both heart and head, saying a lot with very little. Go see it even if you (like me) generally detest scary movies.

This year has also taken us through the latest chapter of what constitutes a blockbuster film in 2015. Consider this: Marvel’s Avengers: Age of Ultron easily cleared $400 million, and set tongues wagging for the studio’s next phase of films. That it just barely stands on its own as a film–characters drop in and out, plotlines are introduced purely for the sequels in mind, the climax is another montage of the superheroes fighting a horde of faceless goons–hardly seems to matter. Comic book movies gonna comic book.

Meanwhile in February, the long-awaited Jupiter Ascending, the latest from (can we call them auteurs?) the Wachowskis came and… went. Look, I applaud the siblings for trying something crazy and imaginative. Few big films risk very much anymore, so when filmmakers want to spend the cultural capital they’ve accrued on flights of fancy I tend to want to give them the benefit of the doubt. But, Channing Tatum was wearing wolf ears; Mila Kunis can’t carry a movie; and somehow, despite the fate of the universe being supposedly in the balance, the stakes for this film could not have felt lower. Sorry Lana and Larry, maybe the world of TV is actually a better fit. 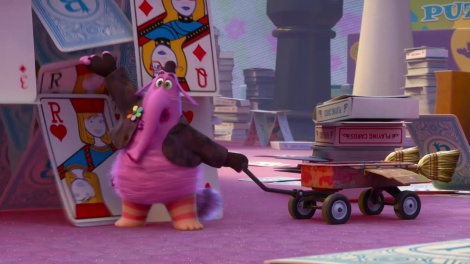 This little guy, Bing Bong, may have provided my favourite film moment so far in 2015.

It’s fitting that Pixar, the singular film studio, would make Inside Out, the singular film. On the surface, it’s a film concept so simple you wonder why no one else has thought of it. (Let’s set a film inside a human brain!) But it’s the elegant execution of said concept that truly separates Pixar from all others. (The Osmosis Jones creators are kicking themselves right now.)

Behind the great voice work (I will never not laugh at Lewis Black raging), and the usual solid visuals, let’s take a moment to acknowledge what Pixar has done here. They just released a movie aimed at kids that teaches them the importance of sadness–as a function of growing up and as a fact of life. This is a company that has made movies featuring villains trying to take over the world, come-to-life toys fighting for relevance, and humanity facing its veritable end. (Wall-E is really heavy when you think about it.) But this, this, humble idea–the interplay of emotions at work inside a young girl–may be the most moving and bittersweet of them all. Inside Out is an excellent film because it uses primary colours to paint a complex masterpiece. It sounds easy, but it’s not.

This two could care less what you think anyway.

There’s no other way to slice it: Mad Max: Fury Road fuckin’ works. From concept to execution, Fury Road does the thing we want from all of our action films; it marries plot with character, while acknowledging that just because a film has lots of explosions, it doesn’t have to be dumb.

There is no waste in Mad Max: Fury Road. Everything–from our intro to Max, the situation on the ruined earth, the villain and his henchmen and, of course, the role of the ferocious Furiosa–is done with pure momentum in mind. The stakes are established in the sharpest of strokes (survival, escape), the action is creative, well-staged and perhaps most importantly, visceral. We feel the dirt tossed up, the shudder of the explosions, the impact of every punch, bullet or errant car part.

And by the end, after we’ve zipped back and forth across that impossible desert, we’re left with thematic ideas that resonate. Left unsaid is the idea that warmongering men have led humanity into this wasteland and an overthrown patriarchy is the only thing to get us out. Max doesn’t talk much in the film, but his actions–towards the women, the villains, his destiny–speak loudly regardless. (Also quietly astounding: the fact that a 70-year-old Australian, 30 years removed from making the last Mad Max film, directs.) You can parse Mad Max: Fury Road a bunch of different ways, but the conclusion remains the same: it kicks your ass.