To see all of the Same Page’s Summer Sight and Sound series–a look at the biggest films of each decade from 1975 on–check out Part 1 here and Part 2 here.

It was inevitable for comics and movies to come together. That’s obvious now in 2015 with comic book-based film plans stretching on into the next decade. Studios want to invest in projects that guarantee a solid rate of return, and comic books are happy to provide both an endless stream of content and an audience. But, it was not always this way. There was a time when pursuing comic book brands as a means to financial success was a risky career move in film. (It’s risky today too–as the Fantastic Four can attest.) It was long believed that many of these stories just didn’t, or couldn’t, translate into film.

With the release of 1978’s Superman, and then just over ten years later, Tim Burton’s Batman, the comic book movie was officially born into the world as a hit. Both of these movies would go on to support sequels in the subsequent decades (three for Superman, one more Burton-helmed Batman) and shape the cultural conversation in a new way. The comic book movie had arrived.

In 1995, a mere three years after the release of Batman Returns, a new movie featuring the Dark Knight was released. It became the biggest movie of that summer making $184 million (second to Toy Story for the year). It wasn’t quite a sequel, but it wasn’t a true reboot. It was Joel Schumacher‘s Batman Forever. 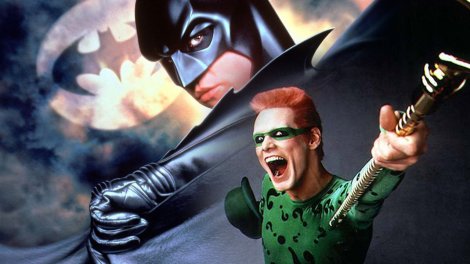 Batman Forever, in all its wild contrasting glory.

The conventional wisdom regarding Batman films is they haven’t aged well (or were never good to begin with). I know this and understand it. But, in preparing to re-watch Batman Forever, I harboured a secret hope: I wanted it to be good.

Allow me to explain. For most of 1995, I wore a Batman Forever-licensed Riddler snapback. I have the movie’s soundtrack on CD somewhere, as it’s one of the first albums I ever purchased. I remember seeing it as an 11-year-old and being in on its whole thing. I was too young for Burton’s Batman movies, so for me this was it. This was Batman on the big screen and I thought it was grand. As I sat down to watch it again, I wanted to forget the 20 years of bad words piled on it, the accusations that it, along with its truly awful sequel, had totally misread the appeal of its characters and ultimately hurt the potential “prestige” of future comic book movies. Yes, deep down, I wanted to watch Batman Forever again and see it as a good film, an underrated gem, a misunderstood classic of the genre.

People, I am here to tell you: It is not those things.

What Batman Forever is instead is lots of loud noises and even louder production design. It has chase and action scenes that mean nothing and go nowhere. It has two villains who essentially act (and overact) in the same way. It has subtext that reads so broadly and with so much camp that it becomes ludicrous text. It boils Batman, one of the more enduring characters of the 20th century, down to a sentiment that runs counter to his entire being (“I’m not Batman because I have to be, but because I want to be”). And worse yet, it has exactly one interesting, prescient idea and buries it behind all of this mess.

The one clever idea involves the plot of the Riddler, the misunderstood genius Edward Nygma (played with typical mid-90s energy by Jim Carrey). Nygma’s evil plan involves the creation of a green blender-shaped device that will play with a person’s brainwaves and beam 3D images into their home. Of course, since he’s the Riddler, it also drains brain power and allows him to syphon IQ, memories and secrets from others. Still, a populous kept within the thrall of endlessly streaming images of entertainment? Now we’re talking current affairs here! It’s as sharp as the film ever gets.

To its credit though, the plot of Batman Forever does attempt to spin a few plates at once. There’s Batman/Bruce Wayne (Val Kilmer), pursued by the maniacal Two-Face (Tommy Lee Jones) and the sexy Dr. Chase Meridian (Nicole Kidman). The former wants to kill Batman for failing to stop an acid attack from destroying half his face, the latter wants to understand the man behind the bat mask. As motivations go, the film doesn’t ask you to think much harder about either character. The movie also finds time to introduce Robin/Dick Grayson (Chris O’Donnell), who emerges on the path of vengeance after Two-Face accidentally murders his family in an attempt to kill Batman. Wayne, obviously feeling guilty, and seeing something of himself in the boy, takes him under his wing. (Who said the overstuffing of Batman films began with Christopher Nolan?) Batman, for his part, largely just exists.

The characters bang together in a series of combinations–Chase comes onto Batman, Two-Face tries to kill someone, Robin acts the punk, Chase comes onto Wayne, the Riddler pontificates. Meanwhile, the performances range from bemused (Kilmer never seems to know where to go), to silly (Kidman deserved better at the time), to so hammy you could make a sandwich. (Carrey and Jones appear to have made a bet to see who can steal the movie; both lose.) The time line speeds up and slows down, the garish set design never relents. And ultimately, for a film festooned with so many question marks, you’ll be left asking why a lot.

Despite perceiving itself as a bold re-imagining, Batman Forever still sticks to the script established by previous comic book movies. Its villains are a product of the hero’s actions and hellbent on revenge. Its women are largely marginalized. (Hey, that’s Drew Barrymore as Two-Face’s concubine!) Its cast is designed to lend credibility to what is a tonally incredulous experience. In a tossed off moment between the villains, Riddler compliments Two-Face’s lair and explains the film’s entire existence. “It’s so dark and gothic and disgustingly decadent. Yet so bright and chipper and conservative.” This was the book on comic movies at the time. Nothing else before or since looks quite like Schumacher’s over-the-top vision, but at its core, he was still colouring by number. 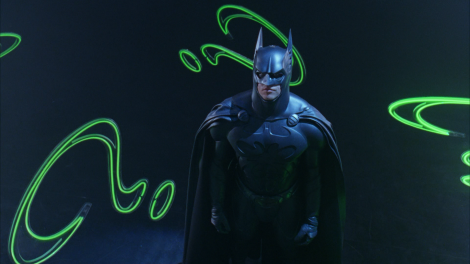 How does the Riddler find the time to build his lair anyway? So many questions.

Flash forward 20 years and there is a sameness now to the look of most comic book movies. The pre-existing forms of the source material are being more ardently pressed into use. It’s still colouring by number, but the finished product is so slick, we don’t care. This is not necessarily a bad thing, as it has forced the quality of these films generally upward. The missteps are called out; the room for risk or re-imagining is gone. For a character as valuable as Batman, there is a brand to protect. You can’t have him say things like “Chicks dig the car” or battle a villain clothed in sparking rhinestones and green spandex.

Well, the truth is: you can. Comic book characters and stories have long been both serious and ridiculous, streamlined and gaudy. You can try to pitch any irreverent idea. But, your film won’t make $200 million dollars. And unlike Schumacher, you won’t get asked to make the sequel (with George Clooney, no less!) For movies and comics to get together now, in this day and age, more certainty is required. The truth is a film like Batman Forever, for better or worse, would never get made today. It exists now not only as a bad film, but as a perfect time capsule.

The Summer Sight and Sound series will return with a look at the biggest summer film of 2005: Star Wars: Episode 3 – Revenge of the Sith.

3 responses to “Summer Sight and Sound: “Batman Forever” But Not Really”