This weekend the eyes of the wrestling world turned to Brooklyn, where the WWE put on SummerSlam, an event that’s ballooned over the years into a three-day affair and a four-hour broadcast. With a hotly anticipated rematch between Brock Lesnar and The Undertaker, Arrow’s Stephen Amell working a tag match, the indie-mark dream match of Kevin Owens v. Cesaro and hosted by Jon Stewart[1], Vince McMahon and co. did everything they could to elevate the night into Wrestlemania for the back half of the year.

It was a great night, filled with strong action and intriguing possibilities[2], but it wasn’t the best show this month[3]. The best show this month already happened in a tiny warehouse set, with a crew of workers I’d barely seen before on a network so far down the dial the air gets thin, if it’s even on your cable package at all. 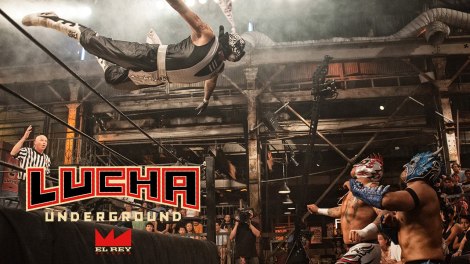 Totally normal. This is Lucha Underground.

I’d dipped my toes into the waters of Lucha Underground a few times since its debut last October. Co-produced by Survivor honcho Mark Burnett, affiliated with AAA, one of Mexico’s largest lucha libre organizations, and airing on filmmaker Robert Rodriguez’s El Rey Network in the U.S.,[4] the show looked to bring the pageantry and athleticism unique to Mexico’s second-biggest sport to a wider continental audience. I’d always been impressed by what I’d seen from them and was happy with the energy they were bringing to professional wrestling, but with their UltimaLucha event on July 29 and August 5, a special three-hour episode that doubled as the finale for the first season, they leveled up, making a forever fan of me and cementing their position as the alternative of choice for fans burned out on the sometimes stagnant nature of the WWE product[5].

What’s immediately apparent when you first watch Lucha Underground is how unabashedly cinematic the presentation is. While the WWE operates as a fake sport masquerading as legitimate competition, Lucha Underground prefers to be in the world-building business, it’s a performative action movie with an overarching, if simplistic plot: promoter Dario Cueto (Luis Fernandez-Gil) dreamed of bringing the best fighters of the world under one roof, so he built his “Temple” out of a warehouse in the Boyle Heights neighbourhood[6] of Los Angeles, put up a fat purse for the winners and there you go, insanity ensues.

For the next ten months, Lucha Underground put on what was possibly the most consistent show in the industry, frequently offering a highlight reel of jaw-dropping action that makes you admire the performers’ dedication while questioning their sanity, centered around the simplest and most classic angles in the business: questing for gold and battling evil.

By showcasing lucha libre instead of traditional North American pro wrestling, the show managed to cut its own path all season, assembling a roster of international and independent workers without relying on the name recognition of former WWE stars, sidestepping the sense of pale imitation that can plague other shows like TNA. The former Superstars they did pull, Johnny Mundo and Alberto El Patron (previously John Morrison and Alberto Del Rio) were so stifled by the WWE style during their time there, they feel completely revitalized and reinvented in the Temple. In more than a few ways, LU conjures the feel of classic-era ECW, with intense action and athleticism spreading from the ring through the tiny stands of loud and passionate fans who love to cheer and chant, but without the skeevy misogynistic bro-culture that sometimes crept into the product coming from the House of Hardcore in the 1990’s. Female competitors like Ivelisse and Sexy Star aren’t cordoned off into a separate women’s division, they’re legitimate competitors on the main roster, squaring off and teaming up with their male counterparts, booked to look strong and often winning.

But everything they’ve done right would have been for naught if they couldn’t stick the landing and give fans the sort of climactic spectacle that truly earns the name “sports entertainment.” I don’t know what my expectations were when I finally sat down to watch the show earlier this week, but I know they were shattered like a bundle of light tubes over a prone opponent’s back. Over the course of the event’s eight matches, viewers were treated to every style of pro wrestling imaginable: bloody and brutal hardcore matches (The Mack v. Cage; Vampiro v. Pentagon Jr.); nonstop aerial spotfests (The 7-man “Gift of the Gods” match[7], the Trios Championship bout); more traditional 1-on-1 grudge matches or title fights (Mundo v. Patron; Prince Puma v. Mil Muertes); and things I’d never seen before (the “Believers Backlash” match where fans surrounded the ring armed with leather straps and sanctioned to use them on despised rudo Hernandez). There was the surprise return of former WWE Diva Melina to a wrestling show for the first time in years, reuniting with her former MNM partner Mundo. There was the reveal of who Pentagon Jr’s been serving throughout his season-long reign of terror. There were title changes and reversals of allegiances. There was no shortage of “HOLY SHIT!” moments that had me rushing, tablet in hand, to share with anyone I knew who had even a passing interest in pro wrestling[8]. There were all the things that make wrestling so arresting to watch, the reasons we loved it in the first place.

Not to say the show was free of problems. The match between Texano and Blue Demon Jr was a clunker that never really got going before interference by Chavo Guerrero forced its conclusion. All the participants are legendary competitors in Mexico, but my lack of familiarity combined with the brevity of the match left me underwhelmed. Additionally, the commentary sometimes sputters in fits and spurts: Matt Striker’s grown into a capable play-by-play man since his days in the WWE, but Vampiro sounds like a color commentator who’s… well, spent over a decade getting thrown around a wrestling ring. These quibbles are minor compared to the overall quality of the card and the majesty of the show’s concluding vignette.

The pre-taped segments are the best part of Lucha Underground, reveling in their own absurdity, totally embracing the pageantry and theatricality of its characters. When storylines move backstage, the look of the show changes completely, shifting from the usual static, shoulder-mounted camera of sporting events (and the WWE) to a filmic vocabulary, with sweeping pans, cuts and close-ups. It’s unlike anything else I’ve seen in wrestling, and like everything else on UltimaLucha, the final taped segment went out with a bang, with enough ridiculousness to have me howling with glee and enough intrigue and open-ended questions to leave me fiending for news of a second season. Where are Dario and the Black Lotus going? Who was that dude in the trailer looking like Goro from Mortal Kombat? Who’s trailing Fénix? What are Marty the Moth’s plans for Sexy Star? What does the title picture look like going forward? Am I supposed to believe Aerostar turned into a fucking spaceship?! I need answers, people!

Or Melina? She’s here too.

As of this writing, though, it’s still unclear if I’ll get them. According to a recent interview on Stone Cold Steve Austin’s podcast with series producer Eric van Wagenen, El Rey wants the show back, but there’s a financial discrepancy between what the network is offering and what the production requires to stay looking as good as it does. Until they figure out how to make up that discrepancy, either via merch, live shows or digital download sales, the future of the show remains in a holding pattern.

While it would be a tragic loss for wrestling fans if the show does tap out after one season, everyone involved should take pride in what they accomplished: providing fans a true alternative to the behemoth that is World Wrestling Entertainment. Even though they do many things right, complaining about the WWE is so de rigeur for fans at this point, seeing a show where every character has a storyline and feels like they have value, so any one of them could be main eventers at any time if called upon to do so, is like Dorothy seeing the Land of Oz in colour for the first time. Like, “Ohhhh, I see. It can be better than what is.” For the good of the business, I hope everyone involved can figure out how to make it work.

[1] In his first public appearance since retiring from The Daily Show.

[2] And one baffling finish to Taker/Lesnar.

[3] Banks v. Bayley from NXT Takeover Brooklyn on Saturday was probably match of the month [if not year], but we’re awarding this on total quality, not just the high spots.

[5] And I’m including NXT in that calculus.

[7] Lucha Underground’s version of the WWE’s “Money in the Bank” gimmick, where the winner gets a title shot

[8] It’s pretty much a given at this point that if Angélico’s in a match, he’s launching himself an obscene distance off a nearby scaffolding.