Late last week, the Toronto Raptors announced a contract extension with their young big man Jonas Valanciunas. The deal is for $64 million over four seasons, beginning in 2016-17, when his rookie deal expires. That $16 million average annual figure might seem high at first glance–it will make Valanciunas the Raptors highest paid player despite playing only 26.2 minutes per game last year.

So will Jonas be worth the investment?

On a recent podcast with Grantland’s Zach Lowe, Stan Van Gundy pointed out that relative contract value is essentially meaningless to NBA coaches. Once a player is signed, you HAVE that player, and therefore, their contract doesn’t mean anything at all unless you’re trying to trade them. He used the long maligned Rashard Lewis contract as an example; the Magic were slaughtered for that deal when it happened and killed again when they moved the huge contract out for the equally damning Gilbert Arenas deal. What got lost, Stan said, was that the three years after the deal was signed, the Magic went from a 42-40 fringe playoff team, to a team that won 52, 59 and 59 games, made the NBA Finals once, the Conference Finals twice, and won at least one playoff round each year. They also didn’t do a damn thing personnel-wise, other than adding Lewis as a free agent. The proof was in the pudding, or so they say.

There’s something to be said for this. The value of contracts is completely relative, especially with the way the salary cap is leaping right now. After settling at $63 million last season, it’s set at $70 million for 2015-16 and projected to rise to around $90 million in 2016-17, and $108 million in 2017-18, when the current Collective Bargaining Agreement expires. That’s a 41 percent total increase to the cap in just three years. When you’re evaluating the worth of player contracts, they should be considered not necessarily as a cumulative number, but as a percentage of the cap figure spent by a team. So while all the crazy deals being thrown around this past summer seem insane, it’s important to remember that it’s all relative. And also that many NBA players spent their off-seasons thusly:

An example: The way the extension is structured, if the Raptors spend right up to the cap, Valanciunas’ projected salary of $14.4 million for 2016-17 is 16 percent of of the Raptors allotted 90 million dollar salary cap space for that year. That’s the equivalent of him making $11.2 million this year, under the current $70 million cap.

The following year, his salary is projected at roughly 15.5 million, which means it’s only about 14 percent when the cap jumps up to 108 million. That’s the equivalent of him making $9.8 million per year under the 2015-16 cap figure. It’s still a healthy raise from his rookie deal, but it definitely seems more reasonable than the near quadrupling of his 2015-16 salary that we see at first glance.

So how can we determine if he’s worth it? Well, the first question I’d ask is: how does that compare to other big men of his ilk?

Despite Stan Van 3000’s point about value to coaches–and it’s a good one–comparing contracts vs. production from like-players is a key way to evaluate the relative worth of a deal. Did a team overreach or overpay? Did that cost them a shot at adding other productive pieces that they might need to make a successful run? Is the deal out of line with the current market for players at a given position? These may not be questions for coaches, but they are certainly questions that matter.

If we look at other 25 and younger centres who have signed extensions, the following 4 names are the best comparisons for Valanciunas when his extension kicks in. You’ll note that I neglected to include Anthony Davis, because he is Anthony goddamned Davis and that is not the kind of player we’re talking about here. (Davis is also classified as a power forward by ESPN Stats and Info currently, which is an argument for another day.)

We’ll look at their experience, their career stats, usage rate and their Player Efficiency Rating (per ESPN Insider) from last season, as well as their contract beginning in 2016-17, when the Valanciunas extension kicks in.

You ain’t need pants for the victory dance 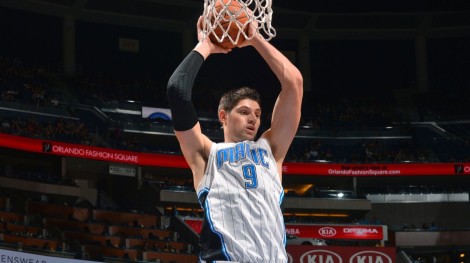 Nikola looks to his coach for guidance: ‘I ALREADY JUMPED, WHAT DO I DO NOW?!?!’

‘Do you ever just like, drink your own sweat out of your jersey? No? Me neither’

‘I was told there would be NO defense in OKC!’ 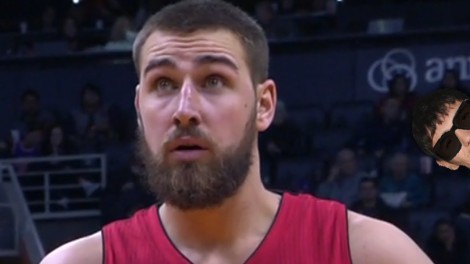 All right, so what stands out?

To me, it’s two things: experience and usage. At 23, Valanciunas and Kanter are the youngest of these five players, but Kanter came to the NBA a year earlier and has a full season of experience at hand. With that said, Valanciunas has already surpassed Kanter in PER, and done so far more efficiently, using just 17.3% of his teams touches, a number that ties him with the immortal Derrick Williams, and puts him in the company of players like Luc Richard Mbah a Moute, Jon Leuer and Cole Aldrich.

Something here feels like it doesn’t compute. At first glance, JV’s numbers don’t appear that far from off from a player like Vucevic and are certainly comparable or better with players like Monroe and Kanter; so what gives?

Well of the five, Valanciunas spent by far the least time on the court last year, playing just 26.2 minutes per game. Cousins played 34.1, Vucevic 34.2, Monroe 31.0 (nearly a career low) and Kanter 28.5 (but 31.1 once he went to Oklahoma City). The other thing they had in common? All four played for dog-shit teams that were never really in playoff contention. Kanter saw heavy usage for the desperate Thunder once he was traded, but beyond that, the Kings, Magic, Pistons and Jazz were cellar dwellers for basically the entire season. These kind of ‘development’ years allowed things like Boogie using an extremely inefficient 31.2% of his teams possessions (and shooting 46%), Vucevic and Monroe’s poor rim protection and Kanter’s abysmal overall defense to be ignored. The Raptors were a front runner for the entire season, which led to Valanciunas spending many fourth quarters riding the pine in favour of smaller lineups or more reliable post defenders. It was a frustrating thing to watch for many fans, who worried about the development of a potential young star.

We were frustrated too, Jonas.

Still, the deeper numbers paint a positive picture. If you examine his per 36 minute statistics, Valanciunas averaged 16.5 points and 11.9 rebounds last year, both career highs. Couple that with a career high 57% from the field (by far the highest of the five players named above) and a career low 3.8 fouls per 36 minutes and the recipe is there for him to contribute in a larger role moving forward. The key will be his defense and passing. He’s been an adequate rim protector in his career, blocking around a shot per game and he is a decent individual defender when he has another big man to guard. Nobody is expecting him to suddenly morph into Theo Ratliff. But in the small-ball heavy new NBA, he must do a better job of helping in the team scheme, of having active hands in passing lanes, and contesting without fouling. On offense he needs to begin finding cutters and spot up shooters from the post; too often last year passing the ball to Jonas down low was to see it stick there. That’s OK when he’s shooting 57%, but it’s also predictable and teams will begin to blanket it.

These things are achievable; they’re not glaring flaws, they’re teaching points. It’s easier said than done, but when you compare Valanciunas to his contemporaries, remember how young and talented he is and note the small improvements he’s made each and every year, this contract that locks him up until his age 28 season might just be a steal for the Raptors.

[Editors Note: This article has been updated to reflect the correct escalating structure of the Valanciunas extension]