We’ve come to the end, my friends. After 11 days and (for me) 14 movies, the celebrations of the 40th Toronto International Film Festival are over. It’s Monday and there is nothing left to do but recount the final five films I saw over the weekend. 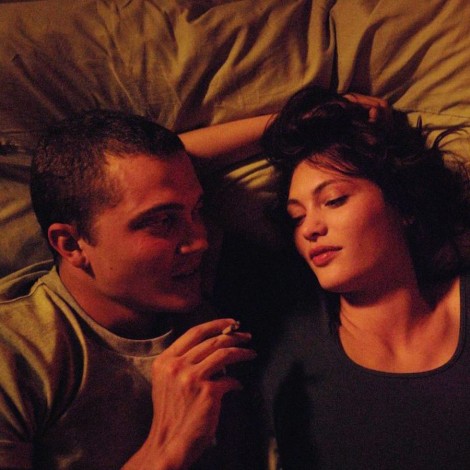 The lovers of Love.

For a film that includes a shot of a penis ejaculating directing into the camera, in 3D no less, Gaspar Noe’s Love is a thoroughly watchable film. Oh sure, it’s gratuitous and uncomfortable at times. (And good lord, don’t watch it with your family.) But it also shows great appreciation for the inherent sweetness, pain and eroticism found in the pursuit of love.

For Murphy (Karl Glusman), it’s just another day in the life. He wakes up next to Omi (Klara Kristin), it’s raining outside, and his son’s crying interrupts a hot dream he was having about his ex-girlfriend Electra (Aomi Muyock). Electra’s mother calls to tell Murphy she’s gone missing and something triggers inside of him. We spend the rest of Love‘s run-time tumbling through Murphy’s memories of his relationship with Electra. As a launch pad for an examination of love, Noe’s set-up is simple, but his technique is not. He’s shot the film with steady-cam smoothness in 3D, with brief (12 frame) cuts to black to minimize eye-strain, and an eye for detail and warmth. The decision to shoot in 3D results in a film that envelopes. Noe himself afterwards said he was reaching for a womb-like feeling with Love. It’s hard not to notice the comforting murmurs of rain, the shots framed by doors and hallways, the mid-shots and close-ups designed to develop comfort and familiarity. The film does not shy away from anything.

Because I’m really burying the lead here. Love is about as uncompromising a film about sex as you’re likely to see. Noe goes all in on developing scenes between Murphy and Electra (and Omi) in an attempt to show sentimental love in all its graphic (unsimulated) glory. Much like it’s experienced by the characters in the film, this endless pursuit of passion works for a time until it doesn’t and things bog down into repetition. (Yes, no joke, the sexy sex scenes start to get a bit boring.) And while Love definitely runs too long, and ends approximately four times, it’s hard to ignore the bravery it takes to go where it goes. The film acknowledges that love can somehow make you feel both invincible and totally vulnerable. It shows a dude–who, it should be said, feels like an alter ego stand-in for Noe himself–reconciling his choices with his reality. And to me, it’s the purest form of the classic trope I’ve yet seen: A man can lose a woman, but he can’t lose the memory. 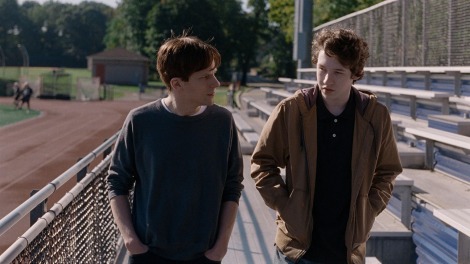 The brothers of Louder Than Bombs.

You never really can know people, not even those in your own family. In Joachim Trier’s Louder Than Bombs, this central idea is explored through multiple perspectives, with the aid of memory, as a family comes to terms with the death of their matriarch.

The Reeds are a family of four: Father Gene (Gabriel Byrne), sons Jonah and and Conrad (Jesse Eisenberg and Devin Druid), and mother Isabelle (Isabelle Huppert). At the start of Louder Than Bombs we learn that Isabelle, a combat photographer, has been dead for a couple of years. A retrospective of her work unites, for a short period, the remaining Reeds and drives them to reconsider their relationship with their wife/mother. They are all grieving in different ways. Trier builds a compelling emotional structure from this with careful editing techniques and an eye towards the doling out of information. We learn one thing and make a judgement, only to be presented with something else which shifts our frame of reference. Despite the relatively low stakes of the film (the Reeds live well), we grow to care about these three guys as they move on in life. For his part, Byrne brings a great weary presence to the film. His Gene relays complicated feelings about how he left things with his wife. Eisenberg does his usual thing as Jonah, and admittedly is the least developed character of the family. While Druid (last seen by me in a couple episodes of Louie) creates a convincing new kind of high school weirdo. As Conrad, it’s his job to take us on the film’s central thematic arc and he does it with aplomb. At the film’s centre, Huppert is solid as the spectre that drives all these characters. She’s beguiling and mysterious in believable ways.

Trier handles all of these minute interactions with a sensitive grace. In someone else’s hands this movie could easily collapse into treacly melodrama, but Louder Than Bombs largely side steps those concerns. By the film’s end, you feel a connection with the Reeds and honestly wish them well. 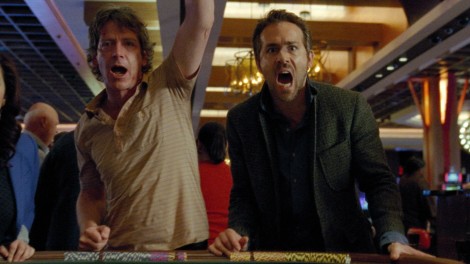 The pals of Mississippi Grind.

Mississippi Grind, the new film from Anna Boden and Ryan Fleck, is a road trip movie about two men touring the American south. Its setting is well-realized, with the bars, casinos and landmarks on hand given equal weight. The blues-heavy soundtrack obliges. You’ll feel like you’ve seen it all before. But, while a lot of the signposts of this film look familiar, its destination is far from certain. This is where Mississippi Grind’s magic happens.

Ben Mendelsohn plays Gerry, a ragged-looking real estate agent in Iowa with a gambling problem. While at the poker table one night, Curtis (played with restless charm by Ryan Reynolds) drops into Gerry’s world and the two are drawn to each other as if by magical spell. Naturally, our hackles go up; Curtis carries every tell-tale con man sign. Nevertheless, the two men, both lying to themselves and others, decide to go on a gambling road trip to New Orleans. For Gerry, who sees Curtis as something of a good luck charm, it’s a chance to pay down his debts. For Curtis, well, his motivations appear less clear. There are roles here for Sienna Miller, as Curtis’ girl, and Robin Weigert, as Gerry’s ex-wife, who connect these men to something more tangible (and painful). We get snapshots of where Gerry and Curtis have come from. We grow to know them. Still, when the moment comes, as you know it will, for these men to bet it all, Mississippi Grind does something surprising.

As with the best of Boden and Fleck’s work (Half Nelson, Sugar), the characters here are perfectly realized. But more than that, their actions feel like they’re happening in real-time, based on spur of the moment decisions. For his part, Reynolds comes on like a hurricane, whirling people up into his maelstrom of possibility. Mendelsohn, meanwhile, has no trouble relaying the down-on-his-luck vibes that emanate from Gerry. These two men are both broken in strange ways and what they find in each other is equally hard to define. So Mississippi Grind just paddles along down the river with them and we enjoy their company and the film’s sense of discovery. At its end, we only wish the story could keep going. This is my kind of film. 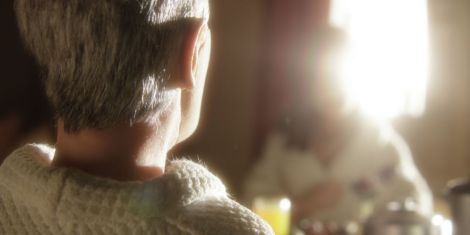 The smallest details of Anomalisa.

Throughout Anomalisa‘s entire run-time, I couldn’t help but feel it was playing a joke on somebody. Maybe me. This is Charlie Kaufman’s second work as a writer/director (this time, co-made with Duke Johnson) and, thanks to a famous body of writing credits, it is inescapably “Kaufman-esque.”

This time out, however, Kaufman’s imaginative world view is brought to life by stop-motion puppets. Anomalisa concerns a man named Michael Stone (voiced by David Thewlis), a burned out corporate speaker. He’s flying into Cincinnati (though it may as well be purgatory) for one day to give a speech to another faceless horde of office drones. In the film’s world, this is quite literal: Every character has a similar face (hair cuts differ, but that’s it) and are all voiced by Tom Noonan. That is, of course, until Michael has a chance encounter with a true individual, Lisa (voiced by Jennifer Jason Leigh), an everyday woman with low self-esteem who sees a trip to Cincinnati as a kind of vacation. This is where I couldn’t help but shake my discomfort. Kaufman uses the transient hotel setting to poke at the boring same-ness of life. His Michael is tired of everything–his job, his wife, his son. The film is clever at invoking this uniformity through Noonan’s play-acting and the sound design on display. But Lisa’s role in the film, elevated as it as by her connection to what’s “real”, feels vaguely mocking. She sings a Cyndi Lauper song for Michael and you laugh, but at whom?

Anomalisa is a beautiful film to look at, its stop-motion work is really astounding. There are some great visual gags here as well (including a reference to a zoo as “zoo-sized” and a phone that apparently has five buttons for room service). It is a funny, weird movie. It’s also unafraid to peer into the abyss of sadness that pools around our modern life. But in its elevation of the presumable “normal” person, it overplays itself. I can respect the artistry on display here, but the sentiment left me unmoved.

The Scots of Sunset Song.

Based on the famous novel of the same name, Terence Davies’ Sunset Song does exactly what it sets out to do: Bring one of the most important Scottish novel’s to life. Unfortunately, its cinematic life does not feel particularly necessary.

Chris Guthrie (a magnetic Agyness Deyn) is the oldest daughter of a rural family in the early 20th century. When her mother kills herself (and her new born twins), she is left to live alone with her angry father (played by Peter Mullan, of course). The film’s narrative follows along as Chris grows into a woman, deals with the farm, grapples with her father and gradually, after meeting Ewan (Kevin Guthrie), falls in love. Davies brings a gentle hand to all of these proceedings–even the rough ones–but it’s hard to shake the notion that there’s nothing new here. Nothing in this film, save for a few wide views of the tremendous landscape, stands out. In a series of medium shots, with a respectful score, we get the jist of the setting, the people, the story. But things just happen as they will and the tragedy of the film, driven with abruptness by the arrival of World War I in the final third, feels far too sudden. We get it: It was a hard life out there in the Scottish hills.

I have no doubt of Sunset Song‘s importance in the canon of Scottish literature. Its film adaptation definitely yearns to portray the life of these people and all of their attendant joys and struggles. It respects its story. But clearly someone of Davies’ stature could have drummed up something besides reverence as a reason to make this film.

We’ll see you all next year!