I mean. I can’t even put it into words properly.

Because I can’t. In the words of every over-exuberant social media addicted child of the post 1995 zeitgeist, I can’t EVEN. 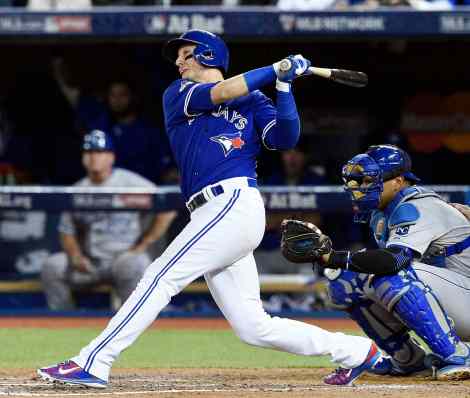 As I keep telling people, it’s not one low. It’s not three low. It’s Tu-lo.

With one swing of the bat on Wednesday afternoon, Troy Tulowitzki sent the Artist Formerly Known as the SkyDome into a frothing frenzy. Exacting sweet revenge on a minor season-long villain in Edinson Volquez was nice, but the catharsis of actually connecting with a ball thrown by the flame-throwing Kelvin Herrera was something that every Blue Jays fan felt deep in their marrow.

I was lucky enough to be one of those fans at the stadium. I’m also lucky enough to be someone who has attended playoff games for both the Raptors and Maple Leafs at various times in my life. I can honestly say, that while I might be suffering from a personal recency bias, the feeling inside the Dome right now is just different. It might be because of sheer size and hunger of the crowd, or it might be because baseball is not the first love of most Canadian sports fans, but there is a tentative feeling of wonderment at all times. Many of the younger fans eschew long-standing baseball traditions, not out of spite but out of a blissful ignorance; the slow clap with two strikes, when to stand and when to sit, not waving towels in the outfield when your own player is at bat – these are things you’d see done with a near military regularity in most ballparks across America. Not so here. And that is perfectly OK. At the risk of sounding patronizing to my own fan base, it’s goddamned endearing. The love is so real and so genuine that people don’t know what the hell to do with themselves. I love it. I love every second of it, and I want more.

We should get it, if not now, then eventually. All nine regulars, including the designated hitter, are signed through next season. Marcus Stroman will return for a full campaign, and Aaron Sanchez should get another shot at the rotation. The questions of Price, Estrada, Dickey and the bullpen are big ones. There are more minor ones about Travis versus Goins, and where to fit in Dalton Pompey.

Now is not the time for such talk.

Now, as it did on Wednesday, it comes down to one game. And hopefully another after that.

Jays fans are understandably nervous. It’s an elimination game, another elimination game and that’s a tough tight rope to walk as frequently as this team has. But if I told you two months ago that on October 23rd, you’d have David Price on the hill in Game 6 of the ALCS, with a chance to force a Game 7, you’d have taken it. Not only would you have taken it, you would have embraced me in a full body hug, gotten mildly handsy and whispered in my ear that I was your little mariquita.

‘But Dan’, you scoff, ‘Price hasn’t been good! He’s lost both his starts and he stunk in his one relief appearance!’

‘That’s fair, sweet goon’ I reply. ‘But in baseball, the ultimate sport of regression to the mean, doesn’t that mean that he’s probably due?’

In his regular season career against the Kansas City Royals, Price is 5-0 in six starts, with a 1.93 ERA and an 0.88 WHIP. He lost Game 2 but he wasn’t all that bad, striking out eight and giving up only six hits, five of them singles. They just happened to come in to score. He’s also a free agent with the biggest pay day of his life coming this off-season; potential suitors are going to want to see a big post-season start from him, the Blue Jays included.

The pressure is on, but to answer my own semi-rhetorical question, yes, he is due.

If you have further reservations, and you almost certainly do, let me throw a few soothing karmic stats your way.

Feel better? Me too.

One response to “Ain’t No Tricks, It’s Time for Game Six”