Everyone loves a comeback story. So here’s one: When I was 12 years old, playing Little League baseball, I was on a team that went to the league championships. The series was a best-of-5, because by then it was late September and city diamond permits expired on October first, plus the baseball moms were getting cold.

So my team, the Red Sox, fell behind two games to none against the powerhouse Royals. With our backs against the wall, we stormed back and won the next three in a row, to claim the league championship.

How do teams that fall behind, come back to win? There are always numerous explanations offered. Some say they played with less pressure, or they focused more, or rose to the challenge. How did we do it? Well, we were kids, so the answer I came up with then was simple, but probably the most effective. “We scored more.”

I’m no sports psychologist, but the comeback win has always interested me from a mental standpoint. I’m interested how teams that are behind, sometimes far behind, turn the tables and change the result in their favour.

The NFL had two comeback victories this weekend, and also saw a team that is hot on the comeback trail for the season. In the early morning game from London, Jacksonville broke open a big early lead against Buffalo, leading 27-13 at halftime. Buffalo came back in the fourth quarter to take a 31-27 lead late in the game, but the Jaguars were able to re-comeback on their final drive, and with 2:16 left in the game, make the score 34-31, which is how it ended. Jaguars quarterback Blake Bortles started slowly, but the Jags’ defense scored two touchdowns and running back TJ Yeldon scored another to break the game open in the second quarter. Jacksonville went on a run of four straight touchdowns, before Buffalo answered back with five straight scores of their own. In the end, the touchdown that mattered most was the last one, where Bortles found receiver Allen Hurns in the front corner of the end zone after a playaction pass. It was Jacksonville’s only score of the second half, but it came at the right time to win the game.

At different times, both Jacksonville and Buffalo looked the most likely team to win. Jacksonville’s second quarter was excellent, while Buffalo’s fourth quarter was far superior to the Jaguars’. One problem was that the Bills’ last touchdown came too early. Another was that, looking at first-and-goal from the 11-yard line early in the fourth quarter, the Bills were unsuccessful in punching the ball in, and ended up settling for a 26-yard field goal. Another four points from a touchdown would have kept them ahead by one point after all the scoring was done. 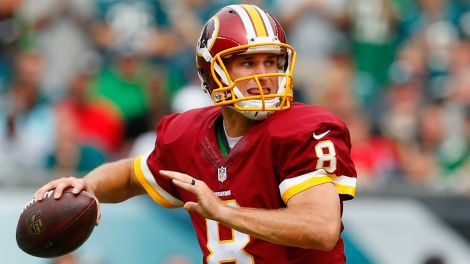 With no RG3, Kirk Cousins has stepped up.

Later in the day, Washington staged a big comeback against Tampa Bay. Washington was down 24-7 at halftime, but scored 24 points in the second half to Tampa Bay’s 6 to take the victory by a score of 31-30. As in the early game, the scoring came in waves. Tampa Bay took the early charge with four straight scores, before Washington stormed back with three straight of their own. The teams traded field goals in the fourth quarter, until Washington quarterback Kirk Cousins found tight end Jordan Reed in the end zone with two minutes left in the game. That touchdown sealed the deal for Washington.

Again here, the losing team was left to rue a missed opportunity for a touchdown. Starting at a first and goal from the 5-yard line, Tampa Bay was unable to get the ball into the end zone over 3 plays, and settled for the short field goal. Both quarterbacks had their best games of the season, but Cousins was the standout, and Washington was able to score touchdowns from inside the red zone. By scoring touchdowns of 8, 3, 3, and 6 yards, contrasted to Tampa Bay’s field goals from 4 and 3 yards, Washington’s red zone offense proved the more reliable and precise, and that lead to the comeback victory.

I’d be afraid to disappoint a guy that looks like this, too.

The Miami Dolphins’ comeback from a horrible start to the season continues, as they destroyed the Houston Texans 44-26, to move to 3-3 on the season. The Dolphins appear poised to make a serious playoff run in the AFC. Ryan Tannehill had easily his best game of the season, completing 18 of 19 passes for 282 yards and 4 touchdowns. Dolphins running back Lamar Miller finally broke out of his season-long slump, rushing for 175 yards and a touchdown on 14 carries. This game was ostensibly over by halftime, and the Dolphins have shown new life under new head coach Dan Campbell. As recently as three weeks ago, I was worried enough to write this headline. Since then, a bye week and two convincing wins have calmed my nerves and reset the ship. Is this really a different team than the one that could only manage 17 points against Washington and 20 against Jacksonville? Or is this a benefit of playing two consecutive games against weak AFC South opponents? This Thursday night’s matchup against the New England Patriots will be the first real test for Campbell’s Dolphins, as will a November 8th rematch against the Buffalo Bills. Until then, don’t call it a comeback, because it’s not complete yet.

The DNA of each comeback is a little bit different, but all have similar traits; a scoring run, assistance from the game clock, and missed opportunities by opponents all factor into the equation. There is a certain fortitude it takes to be behind in a game, and come back to win at the end.

Some observations from Week 7:

Is Todd Gurley the mid-season favourite for Rookie of the Year? I think that’s a pretty clear yes. Star quarterbacks Jameis Winston and Marcus Mariota have been inconsistent, while Gurley caught fire in Week 4 after missing two games with an injury, and has not looked back since. Also, Gurley’s influence on a 3-3 Rams team will end up being a lot larger than Winston’s and Mariota’s for their sub-500 teams that already look out of the playoffs. If I had a vote, it would go to Gurley for his awe-inspiring rushing performances so far this season.

Who is Gary Barnidge? He’s so anonymous that I accidentally wrote his name as Barnridge before realizing my mistake. Barnidge was a career special teamer and backup tight end for the Carolina Panthers and Cleveland Browns until this season, when he moved into a starting role with the Browns and now sits second in receiving yards for tight ends, behind only Rob Gronkowski. Before this season, his career high for receptions was 13. He now has 33 through 7 games. The NFL is great because, like a true meritocracy, it allows for role players like Barnidge to earn a starting spot, and with positive results keep and thrive in that spot. Gary Barnidge for the Pro Bowl!

I seem to have taken to saluting wide receivers in this final space. Well, to keep that tradition going, enjoy some highlights from Oakland rookie Amari Cooper, who had his most productive game of the year this week with 133 receiving yards and a touchdown. He may be one of the league’s best by next season.