Former Blue Jays VP & General Manager Alex Anthopoulos is notoriously tight lipped. Even when he talks, he doesn’t say much. Now that the axe has fallen, resident Blue Jays enthusiast Dan Grant wanted to get a better feel for how things went down, as well as where the future might lie. So, he put in a request for an interview.

As usual, his request was summarily denied.

This is the interview he made up instead. Again. For the last time.

Alex Anthopoulos: (singing) ‘If you like pina coladas…and some guy named Ray…’

DG: Alex? Are you there?

AA: (Sounds of laughter and loud music in the background) Oh you better believe it baby! It’s like I was never here before!

DG: Okaaaaay. What does that mean exactly?

AA: What does it mean Dave? What does it MEAN? It means everything! It means that after years of silence, I can finally say exactly what I’m thinking!

AA: You know it! I’m gonna be dropping all the bombs, all over the place. Are you ready?

AA: Here it comes. All aboard for Truth City, population: you.

DG: Don’t keep me in suspense, I can’t take it!

AA: I said it. Aunt Judy needs to sell the house. It’s a sellers market, she can make some money and retire. I know you and Carla love the place but-

DG: Wait, what the hell are you talking about? Who’s Aunt Judy? Who’s Carla?

AA: I mean, it’s your fake interview, but I think it’s only three times, Darren. Plus, it’s really loud in here. (laughter and the sound of glass breaking).

DG: Where the hell are you? Wait, don’t answer that. I don’t think I want to know. So are you going to drop truth bombs about the Blue Jays? I was promised truth bombs!

AA: I mean, no. I don’t even work there anymore. What am I supposed to say?

DG: I mean about how you left! Everybody wants to know what the hell happened.

AA: But I’m not drunk enough to talk about that cluster fart of a situation. It’s not a good idea.

DG: There’s speculation that you left because Mark Shapiro was going to be too involved with baseball decisions, and you wanted full autonomy.

AA: Well, I’ll put it this way. I certainly didn’t leave because they offered me 8 million dollars over 5 years and full autonomy over baseball operations.

DG: Alright, fair enough, I guess. Well, I have to say, on behalf of a grateful Blue Jays nation, thanks for everything.

DG: Okay, dick! Nevermind. Look, while I’ve got you here, will you at least talk a little Blue Jays for me? A little speculation?

AA: So sensitive. Live a little, Declan, I was just pulling your leg! Ask away.

DG: Where do you see things going for the team this off-season?

AA: Well it’s hard to say, and I’m not saying that just to be difficult, or well, you know, me. There are just a ton of factors to consider. On one hand, the line-up is built to win now. All eight position players and a couple of the bench guys are already locked up, or will be, via arbitration. On the other hand, the pitching situation, already the biggest flaw for the team, has become even more murky. I mean, that’s where you have to spend your money. But how much money do you have? With the Canadian dollar flagging and player salaries escalating, will the payroll be where it needs to be? And will it be spent wisely?

DG: Wow. That was actually insightful.

AA: I used to do this for a living. 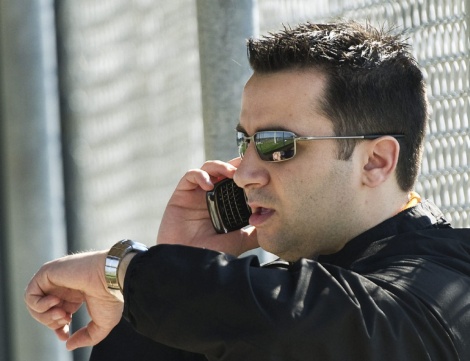 With a massage at nine and brunch at eleven, the former Jays GM is currently swamped.

DG: I heard a lot of questions in there, but not a lot of answers. I know, I know: you don’t work there anymore. But if you had to speculate?

AA: I think the payroll will be OK, for this year anyway. Rogers made a buttload more than they expected down the stretch last year and with 110 million or so already committed for next season, it doesn’t make sense to slash and burn. Yet.

DG: Well that was both encouraging and foreboding!

AA: I’ve got those words tattooed on my butt.

AA: One per cheek.

DG: Moving on! We’ve done this before, but why don’t we play a little name association.

AA: Gone. Long gone. Unless the market completely falls through for him, and I can’t see that happening, I think he’s a Chicago Cub, or maybe an LA Dodger, depending on where Greinke winds up.

DG: Well there’s another name. What about Zack Greinke, who a report has the Jays ‘weighing an offer’ to?

AA: ‘Weighing an offer?’ Ex-squeeze me? Baking Powder? Why don’t they try and make an offer to Babe Ruth or Willie Mays?

DG: Gotcha. So no chance?

AA: Oh I mean, I guess there’s a chance.

AA: And while they’re at it, they can get that kid from Rookie of the Year, he had an arm. Or Bennie the Jet from the Sandlot, I hear he might be available. I mean, he’s not a pitcher, but still, those wheels!

Look, that ‘report’ that came out. It also mentioned that the Jays probably weren’t going to be pursuing David Price, right? Used a lot of unnamed sources? I’m just guessing here.

DG: Well, yeah, that’s exactly what it said. You didn’t read it?

AA: Classic shadow-boxing by Shapiro! I hate that! He says a bad thing but disguises it with the promise of something better, which will never come to fruition. As a sports fan, you’re just supposed to say ‘That’s OK, I don’t mind’. But I do mind! I mind big time! And you know what the worst part is? I never learned to read!

DG: Have you been watching Wayne’s World?

AA: No comment. Anyway, they’re not going after either one of those guys. Your rotation next year is Marcus Stroman, R.A. Dickey, Aaron Sanchez, Marco Estrada and either Roberto Osuna, Drew Hutchison or mid-level free agent starter X. Not a big time guy like that.

AA: What was he, a rule five pick? I don’t remember him.

DG: It’s Spanish for ‘the bullpen’, Alex. According to Google, anyway.

AA: Oh dear god. Luis Rivera is never going to let me live that down. Also, screw the bullpen.

DG: What, like the entire concept of the bullpen? Or just the Jays bullpen?

AA: Whatever. I don’t care. Bullpens are impossible. You think you’re going to hit gold with a Colt Hynes, and then they bite you in the ass. You acquire the most experienced reliever in baseball in LaTroy Hawkins, and his arm suddenly falls off. You draft and develop a stud lefty like Brett Cecil, and his calf explodes. I’m done with the whole damn thing!

DG: I don’t know if you should put that on your resume.

Will Bobby Bear be pitching in the ‘pen or the rotation for Toronto next season?

AA: Seriously though, the Jays bullpen is basically a blank canvas. I think Liam Hendriks and Cecil will be back but beyond that, who knows? I could see them keeping Osuna as the closer but he’d be eminently more valuable to them as a starting pitcher. So if he moves into the rotation, and Sanchez does too, you’ve got a whole lot of spots to fill. In Bo Schultz, Ryan Tepera and Aaron Loup you’ve got guys that do certain things well, but also have flaws; you don’t want to be counting on all three at once. You need to add depth here, whether it’s via free agency or a trade. It’s a completely unfinished product at this point.

DG: I actually agree with you.

DG: I heard you mention him as a part of the rotation before, so let’s go with Marco Estrada.

AA: That’s one that was always going to be easier than a lot of people expected. Estrada has had a below average major league career to this point and though he was wonderful in the second half and in the playoffs, he’s a back-end starting pitcher at best, a long man in the bullpen at worst. The fact that he earned that 15.6 million dollar qualifying offer was amazing for him, as he’s leveraged himself into a longer term deal. But anyone who thought that teams out there were going to give him four years or 50 million bucks were fooling themselves. He doesn’t have the resume.

DG: Speak of the devil. Estrada appears close to a two year deal with Toronto.

AA: I mean, I hate to say it, but it looks like Shapiro is doing some things right, at least.

DG: Maybe I should be fake interviewing him instead.

AA: Hey now, Doug. After all the things we’ve fake been through?

DG: Sorry man. You’re yesterday’s news. Plus, you sound like you’re having a good enough time without us.

AA: Yeah you’re right. It was good while it lasted though.

DG: Alright buddy, well this is it. Thanks for everything.

AA: I prefer the Glee version.