Everyone knows that a quarterback always takes home the regular season MVP award. In fact, since 2000, the award has gone to a quarterback 12 times and a running back 4 times, and if that math doesn’t add up to you, it’s because in 2003, the award was split between two quarterbacks, Peyton Manning and Steve McNair.

Again this season, like the head cheerleader, the MVP award is most likely going home with a quarterback. But which quarterback will it be?

Here are the most likely candidates to be taking home the NFL MVP award in 2015. 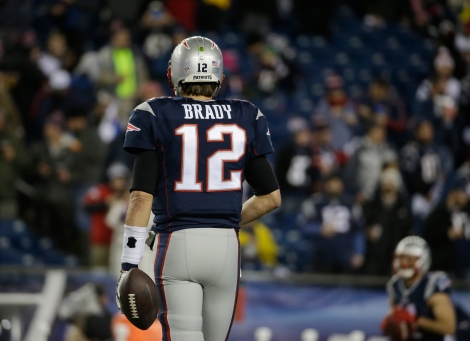 After Sunday afternoon’s thrilling win over the New York Giants, where Brady got a little lucky but also led his team on several comeback drives, the 38-year-old veteran looks the sure favourite to capture his third regular season MVP award. The Patriots now sit at 9-0, and Brady is in the top five of every major quarterback stat category.

Also remember that Brady was the target of an offseason investigation by commissioner Roger Goodell into “Deflategate”, the alleged deflation of game footballs in last season’s AFC Championship game against the Indianapolis Colts. Brady was set to be suspended for the first four games of the season until that decision was reversed just prior to the season.

Since the start of the season, Brady has been a man on a mission, firing 24 touchdowns and only 3 interception, and connecting on 67.8 percent of his passes, his second best total of his career, if he can sustain it the rest of the way.

With the Patriots at 9-0, Brady is easily the frontrunner to capture his third MVP award. But there are some challengers. 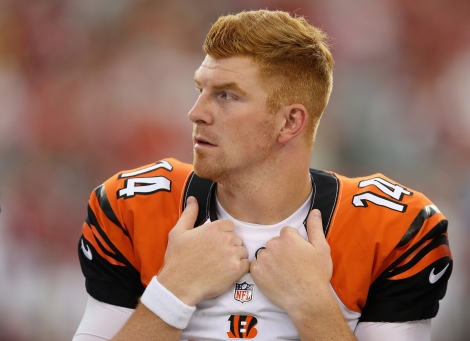 Could this be the man to capture the MVP Award this year?

In his 5th season, Dalton has definitely made a jump from good to elite. He has cut his interceptions way down (he is on pace for 8 this season, which is five fewer than his previous low). He has already thrown 18 touchdowns, and will likely eclipse his previous high. Best of all, his average yards per pass has jumped from 7.06 last season to 8.63 this season, an indication that he is developing a more accurate deep ball.

It also helps his case that the Bengals have looked great so far this season, slightly behind the Patriots’ pace at 8-1 after last night’s stinker against the Houston Texans. This may come down to which team holds the #1 seed going into the AFC playoffs, but Dalton has a very reasonable chance at snatching the MVP away from Brady. 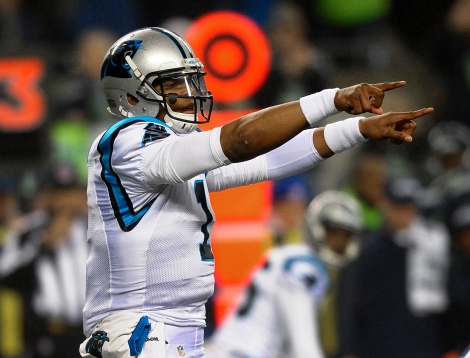 My sub-par offensive teammates are there, and there.

Also in his fifth year, Superman has lead his Panthers to an undefeated record and the fourth-highest scoring offense in the NFL. He may not carry the polished stats of Brady (or even Dalton, for that matter), but Newton adds the mobility element and can gain a first down, or a touchdown, with his legs as well as his arm.

But you probably already knew that. To me, Newton has a shot at the MVP title largely because he is the only truly elite offensive weapon on this team. With apologies to Jonathan Stewart, Greg Olson, and Ted Ginn Jr., Newton consistently trots out of the tunnel with the least offensive talent of any of the five quarterbacks on this list, and still keeps pace with all of them. I think I just talked myself into backing Newton for MVP. 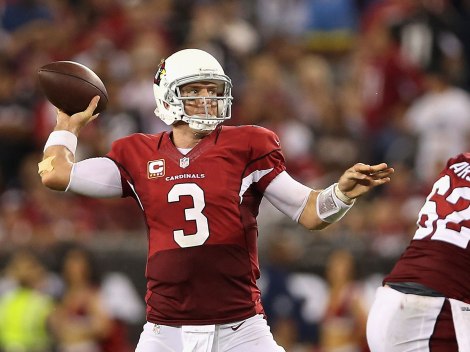 The leader of the league’s best offense, Palmer has an outside chance of scooping the MVP if the Cardinals can stay hot and get through a relatively easy path to the NFC Championship game.

Palmer sits fourth in passing yards and second in touchdowns, while leading the league in yards per attempt. This may be his best season since his days with the Bengals.

After an unsuccessful stint in Oakland, Palmer looks rejuvenated with the Cardinals. He and his offensive teammates are finally fully healthy and showing just what they are capable of. If Arizona can stay on top of their division and earn a first-round bye, Palmer’s name is in the mix for MVP talks, assuming he stays healthy. 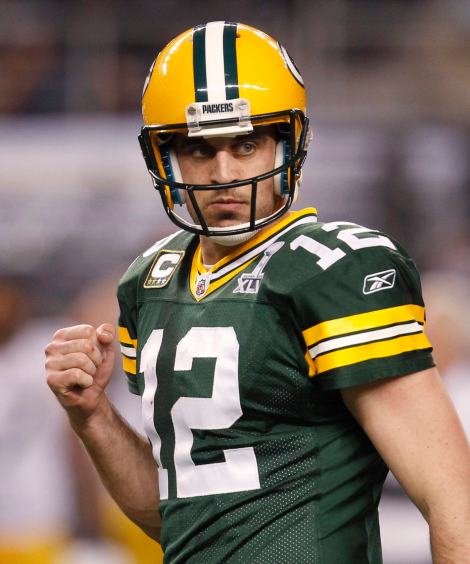 Last year’s MVP winner, Rodgers’ Packers might have just played their way out of the NFC North division lead, and played their quarterback out of MVP consideration. Though it may be tough to pin everything on Rodgers, there is no denying he is having possibly his worst season since becoming the Packers’ starter. He sits 14th in passing yards and 19th in yards per attempt, while connecting on his lowest percentage of passes in years. Even still, he does have 21 touchdown passes against only 3 interceptions, a ratio topped only by Brady.

It might not completely fair, given the Packers have handed Rodgers a shaky offensive line, non-existent running game, and porous defense, but if the Packers are not tops of the NFC North, Rodgers will be the first one eliminated from the MVP discussion.

On rare occasions, the MVP award does not go to a quarterback. Here are two guys who could take home the award who don’t call the offensive plays. 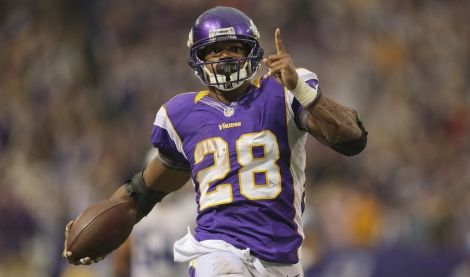 The number-one choice for non-quarterback MVP

Peterson lands on this list because the Vikings have looked pretty damn good, and he is really the driving force. With improved play from Teddy Bridgewater and competence from backup Shaun Hill, this is Peterson’s team and he has put them on his back in this improbable run. As the league’s leading rusher on a division-leading team, Peterson is the first choice of non-quarterback options. 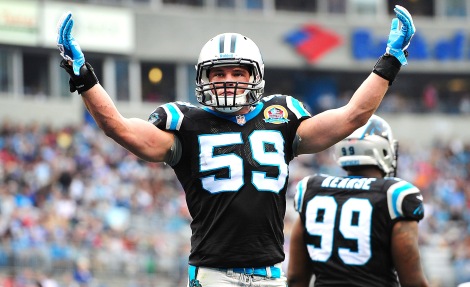 Your defensive player of the year, and very slim MVP potential winner.

The best linebacker in the game missed some time early in the year with a concussion, but has bounced back nicely since then and is second on the team in tackles, while leading in tackles for loss. Kuechly is the most influential middle linebacker to a team since the Brian Urlacher glory days, and it would not be crazy to see him mentioned among the MVP candidates.

Tom Brady has the most intriguing MVP storyline, coming back from national scandal to remind everyone who the king is. But Brady has the teammates and coaching staff that other quarterbacks can only dream of. Dalton has made the biggest leap this year, and that deserves some recognition as well. But I’m pumped for a Cam Newton MVP run, and would love to see his excellent season conclude with him lifting the MVP award.