For the next three Fridays leading up to The Force Awakens’ release on December 18th, join Reynolds as he takes a journey through the fun and weird bits of Star Wars lore. It’s Force Friday!

If you take a moment to consider the optimal viewer order of all six of the Star Wars movies you can find yourself falling down some fairly compelling rabbit holes. Over at the AV Club, Noel Murray suggests you should watch Episodes 1-3 just after watching The Empire Strikes Back, so as to best luxuriate in the supreme tension of its cliffhanger ending, and also understand just how exactly Darth Vader came to be. Since the main thrust of the films has always really been Luke’s quest, the prequels work as a nice bit of universe-filling backstory, before jumping into the conclusion provided in Return of the Jedi.

One thinker has gone even farther, suggesting that The Phantom Menace–everyone’s favourite to hate on–be dropped entirely. Reading up on what this post calls the Machete Order proves there is a solid case to be made for this. It also confirms what Murray was suggesting, that the story elements of Episode 4-6 actually pay off in a nice way by watching the prequels after Episode 5. Another site, Den of Geek, provides a similar breakdown.

“I’m not as important to this story as I’d like to believe.”

In each case, the general conclusions remain the same. By watching the prequels (even with or without Episode I) after Empire Strikes Back we get some interesting results.

If you’re into watching all six movies, you’re good (though you’ll probably still complain about Jar Jar’s presence). If you opt for the Machete Order, you’ll probably find the same holes that are outlined in the post–namely, you won’t appreciate the storyline involving Anakin’s mother in Episode II, and C-3PO’s presence will be a bit confused. No over-arching 40 year narrative is perfect.

Case in point, I still have three things in the Star Wars film universe that I’d like to have explained, regardless of the order. Again, as with last week, I’m going to lean heavily on the word “film” in that previous sentence. I’m sure somewhere, in a novel or a comic book or something, these things may be fleshed out. But with The Force Awakens coming out in one week (cue high pitched squeal), we must acknowledge that all the old Extended Universe canon has been washed away.

“Hello, yes, I’d like you to trust me please. Thanks.”

Ask anyone, you know, in storytelling about karma and they’ll point to its importance as a guiding principle for a solid plot. Yes, there are films (usually art-y slash pretentious ones) that do not subscribe to this specific concept, but generally movies–especially of the Star Wars type–make sure to pay it heed.

I had someone point this out to me in regards to the construction of The Empire Strikes Back. It’s widely acknowledged as the best of the Star Wars movies, and yet, it decidedly does not work as a satisfying standalone film. It’s incomplete. And upon reflection, one of the biggest things that stand out is the total lack of karmic balance in Lando Calrissian’s storyline–he never really quite pays for almost getting all of our heroes killed.

When we first meet Lando, he’s a slightly reformed anti-hero like Han Solo; he’s Han with a day job. Solo, in case you’ve forgotten, is a scoundrel. He kills an alien in cold blood (yes he does) and then skips out on the Death Star battle (for a time). His redemption comes at the end of A New Hope, as he saves Luke, spins Darth Vader out of the way, and helps the Rebellion destroy the Death Star. They even give him a medal!

Lando, meanwhile, does no such thing. He betrays everyone to the Empire to save his mining concern and, despite a few seconds of choking at the hands of Chewbacca and one good pop to the mouth, he never really has to pay much for the double-cross. The Alliance even makes him a General later.

Now, I know what you’re thinking, but doesn’t Lando get Leia and Chewy out of the jam he put them. Sure, but not after he’s borne witness to C-3PO being torn apart, gotten Han trapped in carbonite, and inadvertently led Luke to his doom. And then in Return of the Jedi, everybody’s friends again. It’s really rather jarring when you think about it.

“That’s it? I get one movie? Damn. Somebody call my agent.”

I know–I know–there exists somewhere an entire breakdown of the Empire’s governmental structure. I know if I googled “Grand Moff Tarkin,” and was very mindful of the spelling, I’d be directed to a Star Wars site that would explain Tarkin’s role in the Emperor’s expansive galactic dictatorship. “Grand Moff” is, after all, a title, and Tarkin wears it well; for my money, he’s one of the more memorable characters of that original trilogy (partly because Peter Cushing totally crushes the role as only a classically trained B-movie star can). He’s the kind of character you’d want to google to find out more about.

Still, this would not quite explain how Tarkin is able to talk down to Darth Vader in A New Hope. It just won’t. He marches into that Imperial boardroom, a bunch of white dudes sitting around a huge table, and he just lets these bums know how it is; the Emperor has dissolved the Imperial senate, the regional governors now have direct control over their systems, and Tarkin will blow up any planet that says otherwise. Later, Leia even remarks at how unsurprised she is to see Tarkin holding Vader’s leash–that’s Darth Vader she’s talking about here, on a leash, like some kind of dog. Just for kicks, Tarkin also dismisses the entire Jedi Order as if he was sending back a bowl of cold soup. This, after Darth Vader has force-choked a guy to death right in front of him. I mean, the nerve of this guy!

Anyway, Grand Moff Tarkin gets himself blown up in the first Death Star (his “moment of triumph” as he calls it), and is never heard from again. The Empire doesn’t get a new Grand Moff, no one ever, ever, talks down to Vader again (except the Emperor, who openly goads his own son into trying to kill him) and that’s that.

Part of me will always feel like Cushing, Tarkin, and those scary-high cheekbones deserved better. 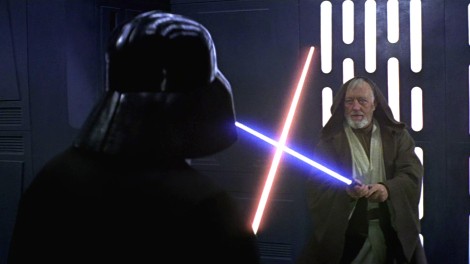 “You know, I was thinking, Darth. After this, you wanna get outta here, maybe grab a bite to eat?”

Watch A New Hope again. Keep the subtitle above in mind. Go ahead, I’ll wait. Notice anything weird? Yes, I’m sure you did. Obi-Wan just goes ahead and refers to Darth Vader as “Darth.” Not Vader. Not Darth Vader. Not even Anakin. This will never not be weird to me.

Much has been made about the meaning of the names Darth and Vader. As astute linguistics out there have noticed, “Darth” is a direct play on the word “dark,” while “Vader” calls to mind the Dutch word for father (or German “Vater”). So yes, Darth Vader is literally designed to have you think of Dark Father, which makes sense since Vader is a father and he is, you know, dressed in black.

But then the prequels come a long, and suddenly everyone is a Darth. There’s Darth Plagueis, Darth Tyranus, Darth Maul, and of course Darth Sidious. That’s a lot of Darths.

Never, not one time, are any of them referred to by just the name “Darth.” And certainly not as casually as Obi-Wan, who is confronting Vader for the first time in years and definitely has a death wish on his mind, when he decides to toss it out there like he’s remembering his old buddy Phil or Jeff or something. The truth is, I’ve long suspected that George Lucas hadn’t really thought that far ahead when he came up with the Darth Vader name. It sounds cool, and technically foreshadows the big twist of Empire. But was he really–in 1975 or so, as his film career was crumbling apart–dreaming up an entire complicated order of evil warriors called the Sith who had strange names and were all titled Darth? I think not.

And so, this remains the strangest, out of sorts element in the entire Star Wars series.

One response to “Force Friday: 3 Weird Star Wars Things to Think About”