For fantasy football players across the continent, this past weekend’s games were most likely the first week of the playoffs.

And, as always, NFL coaches and players alike could not care less about your fantasy team. And that left some fantasy players, myself included, feeling some real life heartache.

Injuries and poor performances piled up, while others had big games in a too-little-too-late type of situation. Angry fantasy owners got on their twitters to express their outrage, making themselves and, really, our whole obsession with sports, look ridiculous. 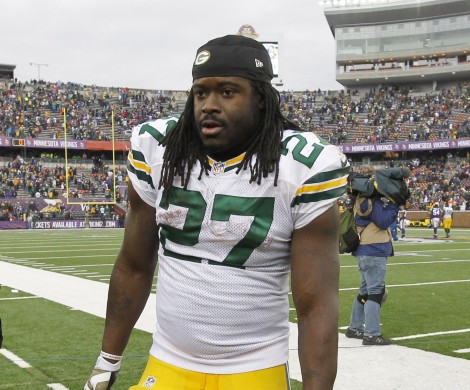 The most disappointing fantasy player of all time?

On draft night, I thought I had done quite well for myself, selecting Green Bay Packer running back Eddie Lacy and Chicago Bear wide receiver Alshon Jeffrey with my first two picks in a dynasty-style league. For those of you unaware, dynasty leagues require owners to keep the same players, year after year, unless a trade is made or a certain player retires. I also picked up rookie quarterback Marcus Mariota, alleged Jordy Nelson-replacement Davante Adams, and Dolphins rookie receiver Devante Parker, as well as Arizona rookie David Johnson and Washington’s Matt Jones. So, I figured I had bought low on some young players, who are allegedly going to be relevant to their respective teams’ offensive successes.

It did not work out that way, obviously. Jeffrey and Lacy were injured and inconsistent, Mariota experienced the normal growing pains of first-year quarterbacks on a bad team, the Davante’s were practically non-existent. Johnson and Jones had some big games, often intertwined with awful ones, and were far too unpredictable. In short, my team stank.

And so, presumably, did most of the fantasy playing world’s teams. And no week was it more noticeable, or more hurtful, than week 14. 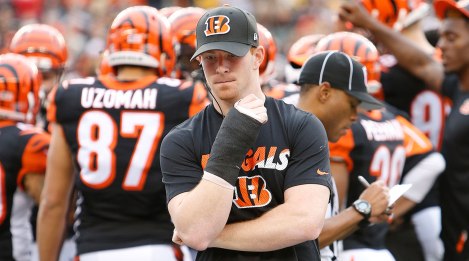 Dalton’s broken thumb won’t need surgery, but how long will he be out?

Cincinnati’s quarterback Andy Dalton, who was a top-5 fantasy quarterback all season, went down on Sunday afternoon with an injury to his throwing hand. While hundreds of fantasy team owners likely suffered losses at this development, the real Bengals, and the real Andy Dalton, are the real losers, as they stand poised to enter the playoffs for the fifth consecutive year, with nary a playoff win to show for it, and now without their starting quarterback, a top-five quarterback.

Seattle Seahawks running back Thomas Rawls, who had more-than-effectively replaced starter Marshawn Lynch when the latter underwent abdominal surgery, suffered a season-ending broken ankle injury. Owners who had wisely picked up Rawls in Lynch’s stead were dealt a severe blow, while the actual Seahawks performed admirably well without their top two running backs on the depth chart. 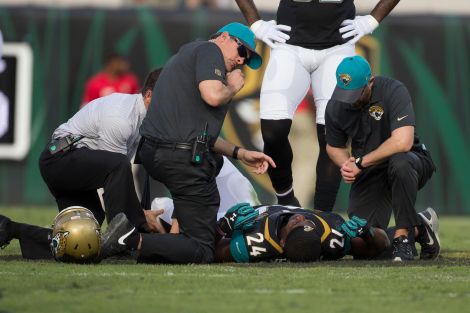 Jacksonville, which has actually been a feisty team this year, has yielded several fantasy top players; Quarterback Blake Bortles, receivers Allen Robinson and Allen Hurns, and running back TJ Yeldon. Hurns and Yeldon have both been sidelined recently, perhaps long-term, so while the Jags have been tougher, and definitely exciting offensively, they are still the same old unlucky Jags.

Injuries were not the only culprits this weekend. Some players are not just penciled-in starters; they are chiseled in with high expectations attached. But, poor performances by Larry Fitzgerald, Calvin Johnson, and Mike Evans handcuffed a lot of owners. 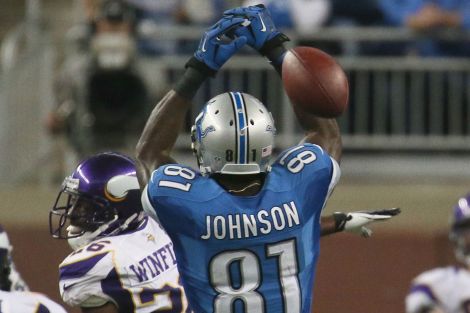 Whoops! Calvin Johnson did not play his best this past weekend.

Eddie Lacy, my prized first round pick from August’s draft, has had a terrible season. But, almost as if to slap me in the face, awoke on Sunday afternoon against the Cowboys with 124 rushing yards and 1 touchdown, his highest total to date, just as I had wrapped up my last-place season. The wild inconsistencies of Lacy, both in fantasy and real-life, have been frustrating for me, but likely a million times more so for Lacy’s real employers, the Green Bay Packers.

Football is a tough game, and injuries will eventually catch up to most players at some point in the season or in their careers. On top of that, even the best players struggle through fluctuations in their form, and can go from hot one week to cold the next. Fantasy owners and fans alike will be keeping a keen eye on developments the next few weeks, hoping to get the right performance at the right time to win the championship. Just remember that those players, and their coaches, likely don’t care one lick about you or your fantasy team, so cursing them out over Twitter or on some fantasy site does nothing except make the perpetrator look like an idiot.

The fantasy world can be one of wild ups and downs, and owners can find themselves cursing at real-life people, over fantasy points. Just remember, the heartache you feel as you watch your star fantasy player go down with injury, is only exacerbated tenfold when you are that player’s real coach or teammate, and maybe a million times greater for the player himself. So keep cool on your twitter and, if you’re still alive, enjoy your fantasy playoffs.