Many people of a certain age consider watching the original Star Wars trilogy to be a formative experience. They recall that first viewing as a significant childhood marker. Over in the New York Times, critic A.O. Scott provides a take on what the films have meant to him over the years. Cathal Kelly of the Globe and Mail (if you can believe it) has a whole different batch of memories. Those are just two examples of the outpouring of emotion surrounding Star Wars; it’s easy to find more. Whether it was in a theatre in 1977, via a grainy VHS tape in 1985, or some other way, the specific feeling or memory of watching it, of visiting a long time ago in a galaxy far away, remains a powerful cultural touchstone.

But for me, the truth is different: I don’t much remember the first time I saw any of the original Star Wars movies. 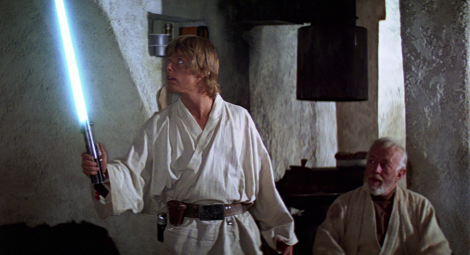 The timeline goes something like this: I remember being at my dad’s cousin’s house and seeing the Endor speeder chase from Return of the Jedi. For whatever reason, that sticks in my memory. I can recall expressing delight at the Jabba’s palace sequence as well (because who doesn’t delight in it?) I did not dig The Empire Strikes Back at the time–too much time spent on ice, in the jungle, in defeat. And finally, I remember the trip down the Death Star trench, the music and the medals being handed out. I feel positive that my dad was the one to watch it with me. I know I enjoyed it, but I can’t remember when exactly. My first Star Wars experience was borne more through osmosis than any concrete moment in time. I can’t remember a time when I didn’t like it, Star Wars was always just… there.

Years later, in 1997, my younger brother and I trekked to the Woodbine Cinema in the heart of winter to see the Special Edition re-releases. I was going on 13, he was almost nine; we sat in silence together without parental supervision. It felt important to be there, but if you’d asked me why, I’d have had no answer. My strongest recollection is not about the films themselves but having to sit in the second row for The Empire Strikes Back, which was still my least favourite; we’d shown up to a full house. At some later date, for my birthday or Christmas, I got the Special Edition trilogy on VHS. I nearly lost A New Hope to a VCR that mangled the tape’s pre-show featurette, the one with George Lucas and the production crew explaining all of the new changes they’d introduced. It could have been much worse.

I was just shy of 15 when The Phantom Menace was released and had to wait a few weeks to see it for my brother’s June birthday party. I skipped last period in Grade 12 to see Attack of the Clones, and eased into Revenge of the Sith with the clear mind of a soon-to-be third year university student at the beginning of his long summer break. I know I was just outside the optimal age range for these films, but I enjoyed watching them just the same–the goofy mix of glee and operatics in the first, the mystery and endless action of the second, the doom and bloom of hope in the third. I even had some of the toys. (There’s a battle droid and a Qui-Gon Jinn figure in my parents’ house somewhere.) Yes, they are tedious movies to consider now ten to 15 years after the fact–don’t let the think pieces change your mind about this–but still, it was new Star Wars in my lifetime; I could point to the prequels and call them my own. The memory of each was etched firmly on my mind, for better or worse.

It’s this sentiment, I think, that’s become the true root of my Star Wars passion. While others get to talk fondly of being there when the films first came out, or the one moment when this specific universe opened for them, I can remember only flashes. It’s become a chase to claim emotional ownership, to say this is my Star Wars experience. In the intervening years I’ve read countless Expanded Universe (EU) novels, thumbed through comics, and played many a video game to quench this desire. I can tell you about how Boba Fett escaped from the Sarlacc pit, or what Kyle Katarn and Wedge Antilles are all about. There’s still more I don’t know. Then again, I remember playing Knights of the Old Republic II: The Sith Lords as it stumbled towards its buggy and incomplete ending. I can clearly recall muscling through Dark Saber, a weird novel featuring Durga the Hutt’s plan to build just the laser part of the Death Star so as to rule the galaxy. I finished both that book and that game, and never read or played another Star Wars thing again. I wondered then: Why was I spending so much time in a universe that had been at its best one year before I was even born?

Now we jump to this year and the series of trailers released in anticipation of The Force Awakens. It’s another new Star Wars movie released within my actual lifetime. Unfortunately, I’ve spent the last ten years revelling in a sort of cynicism that remembers that the EU is mostly bad, the prequels worse, and Lucas’ re-release hack jobs something just shy of sacrilege. As I tip further past the age of 30 I’m supposed to be too old for this Star Wars stuff anyway.

Then again, the first Episode VII teaser opens with the line, “There has been an awakening, have you felt it?” and, guess what, I did feel something. The full length trailer came later filled with questions about those same old stories–both what they meant then and what they could still mean. The marketing for the movie (which has been brilliant) has tapped into this exact feeling of jadedness. It acknowledges that this new Star Wars will have to rediscover its own magic. It presents it as a trip worth taking. So, of course, when the tickets for The Force Awakens first went on sale I jumped at the chance to pick up a pair. I ended up with two Tuesday evening IMAX tickets. In any case, I could wait until then. I told myself the chase was already over. It would be no problem.

Then the buzz started building this past week and I decided to look into what kind of tickets were still available. Surely, they hadn’t all been sold. It didn’t take much for this line of thinking to progress quickly from “let me just check”to “sure I can see it twice in one week.” I called my parents up (my mom was in on this now, along with my dad) and told them the new deal: Friday afternoon, 4:30pm, three seats marked for us. These details have been stamped on my brain all week. How can I explain this? What can I even say?

It’s Star Wars and it’ll always be there.

One response to “Force Friday: You are Here in a Faraway Galaxy”